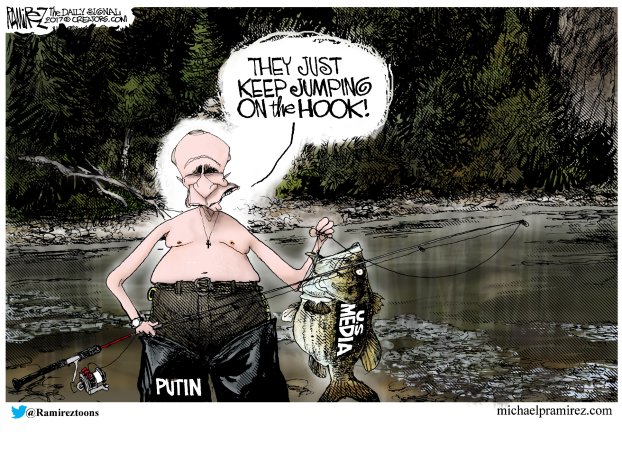 The latest excitement in the Trump-Russia investigation is a set of Facebook ads linked to Russia, about 3,000 in all, that some of the president’s adversaries hope will prove the Trump campaign colluded with Russia in the 2016 election.

“A number of Russian-linked Facebook ads specifically targeted Michigan and Wisconsin, two states crucial to Donald Trump’s victory last November,” CNN reported recently. Some of the ads, the network continued, appeared “highly sophisticated in their targeting of key demographic groups in areas of the states that turned out to be pivotal” to Donald Trump’s victory.

But is that the whole story? Not according to a government official familiar with the Facebook ads, who offers a strikingly different assessment. What follows is from the official and from public statements by Facebook itself:

2) Twenty-five percent of the ads were never seen by anybody. (Facebook revealed that.)

3) Most of the ads, which Facebook estimates were seen by 10 million people in the U.S., never mentioned the election or any candidate. “The vast majority of ads run by these accounts didn’t specifically reference the U.S. presidential election, voting or a particular candidate,” Facebook said in a Sept. 6 news release.

4) A relatively small number of the ads — again, about 25 percent — were geographically targeted. (Facebook also revealed that on Sept. 6.)

5) The ads that were geographically targeted were all over the map. “Of those that were targeted, numerous other locales besides Michigan and Wisconsin, including non-battleground states like Texas, were targeted,” the government official familiar with the ads said, via email.

6) Very few ads specifically targeted Wisconsin or Michigan. “Of the hundreds of pre-election ads with one or more impressions, less than a dozen ads targeted Michigan and Wisconsin combined,” the official said.

8) The Michigan and Wisconsin ads were not widely seen. “The majority of these Wisconsin and Michigan ads had less than 1,000 impressions,” the official said.

10) The ads just weren’t very good. The language used in some of the ads “clearly shows the ad writer was not a native English speaker,” the official said.

In an Oct. 4 news conference, the Senate Intelligence Committee chairman, Republican Sen. Richard Burr, did not play up the Facebook angle. “I think if you look from 10,000 feet, the subject matter of the ads was — seems to have been to create chaos in every group that they could possibly identify in America,” Burr said.

Burr noted that he has no objection to Facebook releasing the ads publicly. Certainly doing so would go a long way toward clearing up the public’s understanding of the issue. Like everything else in the Trump-Russia affair, people need to know what happened.

York writes for The Washington Examiner.

Yes, he’s childish and incompetent. Is that really news by now? But of course, it wasn’t that assessment of Failed... read more