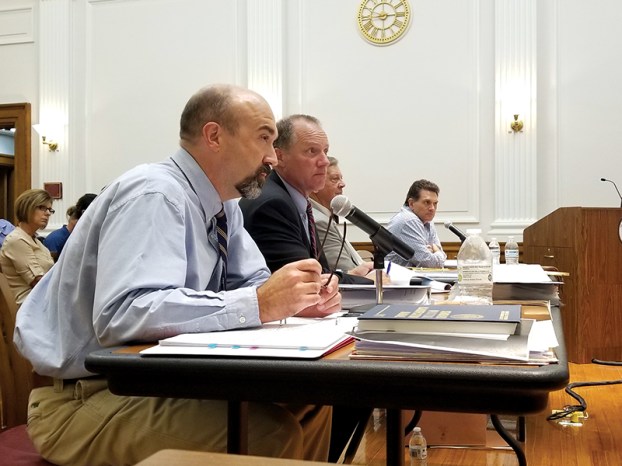 Josh Bergeron / Salisbury Post - Rowan County Planning Director Ed Muire (right) and attorney Dave Poleka (second from right) listen during a Zoning Board of Adjustment meeting on Monday night. In the background is David Eller, who owns a dirt track that was shut down by the county's planning department.

SALISBURY — After being shut down by county staff, local businessman David Eller on Monday argued that he built a 10-acre dirt track near an east Rowan County subdivision for his son and friends to ride on, not to host races.

Neighbors say the track is a nuisance. It results in excessive noise and, potentially, lower property values, they say.

The Zoning Board of Adjustment on Monday didn’t make a decision about the appeal. At 10:30 p.m., the board adjourned with plans to reconvene Tuesday evening.

In February, Rowan County Planning Director Ed Muire wrote a letter asking that Eller stop operations at the track, which is adjacent to the Kingstree Subdivision and in Deer Creek Subdivision. When Eller continued using the track after the first letter, the county issued a $25 fine.

Pressed Monday about his decision, Muire said the track fits the common definition of a racetrack.

Meanwhile, Eller and his attorney argued that there have been no races at the track. Reamer framed the case as an instance of a man using private property to provide activities for his son.

“What Mr. Eller has built here is a safe place for his kids to ride,” Reamer said. “The neighbors have overreacted and complained about this without finding out what the heck is going on.”

A number of witnesses testified during Monday’s hearing, including Muire and Eller.

Reamer posed a hypothetical scenario to Muire — would it be OK to remove the muffler from a truck and ride it up and down a neighbor’s property line? First, Muire avoided answering the question by saying he’d need to look at exact details of the situation. Later, he said Reamer’s scenario was not the issue under consideration on Monday.

“Sure, he has a great family and everything, but we want to get to the facts of what we’re here for,” Fisher said.

Eller spoke for the longest period of any witness. He said that sheriff’s deputies once came to the property because of complaints from neighbors. However, deputies said there were no criminal violations.

After that incident, Eller said he attempted to communicate with neighbors to sort out racetrack-related issues. Many neighbors in the audience groaned when Eller and other witnesses made that claim. At one point, a man in the audience shouted, “No, you didn’t.”

Other witnesses who testified Monday said activities at the dirt track do not fit with a typical definition of racing, that noise is not a problem and that the current use is an improvement compared to the overgrown lot that existed previously.

SALISBURY — The family of E.B.C. Hambley, the entrepreneur who built the Chateauesque-style mansion at 508 S. Fulton St.,... read more