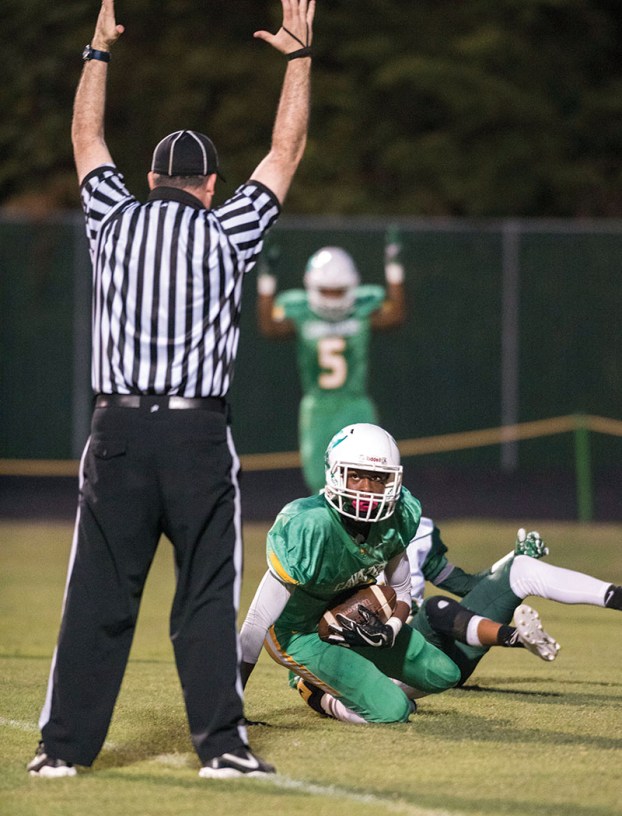 SPENCER — North Rowan headed to Albemarle on Friday night with serious concerns about an injury-depleted corps of receivers.

Leading pass-catcher Quintous Smith Jr. was out with a concussion, Russell Bacon was sidelined with a broken wrist, and cornerback Isaiah Gibson, a backup wideout, had an ankle issue. Freshman Tyshon Sifford was on the bus. Sifford normally plays jayvee, but his addition meant that the Cavaliers, who use four wideouts on almost every snap, had four healthy bodies.

“We went down there with four true receivers,” North coach Ben Hampton said. “And we didn’t have Quinton. That meant someone was going to have to come through.”

Sifford, Denerio Robinson and Logan Stoner contributed catches, but the guy who really came through was junior slot receiver Stanton Bailey. Bailey’s three grabs went for 30, 38 and 50 yards. The 50-yarder was a bomb, on which he streaked past the Bulldogs’ secondary, secured the catch and out-ran people to the end zone.

Bailey said he’s been playing football since he got started when he was 6. At practice, he still wears an old gold jersey that barely covers his shoulders. It’s a reminder of his earliest football days with the Boys and Girls Club.

Bailey has invested a lot of time and sweat in football and he has the speed and heart to excel, but his progress was frustratingly slow during two seasons on the North jayvees.

“I tried my best, but I just wasn’t catching the ball very well,” Bailey said. “I did do a pretty good job of blocking. I knew if I blocked as hard as I could, I’d play.”

Hampton said Bailey’s turnaround started almost immediately after North lost to Reidsville in the third round of the 2A state playoffs last season.

“You could see he was serious about being a really good player for us this season,” Hampton said. “Our varsity offense is a lot more complicated than our jayvee offense, and all four of our wide receiver positions are different, but he learned all four of them. He was going to be ready to play wherever we needed him.”

Stanton made his first varsity catch against Salisbury on opening night. His first varsity touchdown came on a fine, diving catch in the end zone against North Moore on Sept. 22. It looked like a busted play, but Bailey kept running and he put himself in position to make a play.

Still,  Hampton and the coaching staff waited patiently for him to have that breakout performance.

“He wasn’t catching that many passes, but he was blocking his tail off,” Hampton said. “He understood right from the start that when you block to help out the running game, it’s going to open things up for you to catch more passes. Blocking is such an important part of a wideout’s job. Stanton gets that.”

Bailey only had one catch in North’s difficult win against South Stanly on Sept. 29, but it was for 47 yards.

Bailey had an early setback. North was wearing its all-white uniforms for the road game, and the No. 6 jersey, that’s Bailey’s number, was nowhere to be found.

“Isaiah Gibson wasn’t going to be able to play, so I wore his No. 7,” Bailey said.

The ”7,” as is often the case, proved lucky. Bailey enjoyed his career game.

“I’m pretty fast,” Bailey said. “I was able to get down the field and make some plays.”

It wasn’t just the three big catches. His blocks on the edge helped spring Jaleel Webster for a huge gain on a screen pass and helped Malcolm Wilson get to the house on another one.

He blocked hard on kickoff returns, did everything he could to make up for Smith being out.

“As a receiver, you figure that nine out 10 plays, the ball isn’t going to come your way,” Bailey said. “So I blocked on every play.”

On Friday, however, Bailey was targeted more than usual, and he caught the ball. North QB Willis Mitchell threw for a career-best 311 yards. Bailey was a large part of that.

“The guy showed me something down at Albemarle,” said North assistant Nick Means, one of the best wideouts in Catawba College history.

“He made catches he hasn’t made all year and he also made big yards after those catches,” Hampton said. “It’s one thing to catch the ball. It’s another thing to make a play with it. He’s improving by leaps and bounds.”

Smith (19 catches, 359 yards, 4 receiving TDs) is expected to be back in action this week when North hosts Chatham Central. He’ll form quite a 1-2 punch with Bailey (9 catches, 237 yards, 2 TDs), whose confidence is growing by the minute.

Stoner is steady, Sifford is promising, and Hampton believes Robinson, a 6-foot-4 junior, has a chance to be be something special for the seventh-ranked Cavaliers (6-1, 3-0 Yadkin Valley Conference), who have lost only to 3A West Rowan.

By the time the 1A state playoffs roll around, North’s receivers won’t be depleted. In fact, they may be a handful.

By Mike London mike.london@salisburypost.com SALISBURY — It was overtime, second-and-2 at the North Greenville 17. Catawba back Eamon Smart saw his... read more