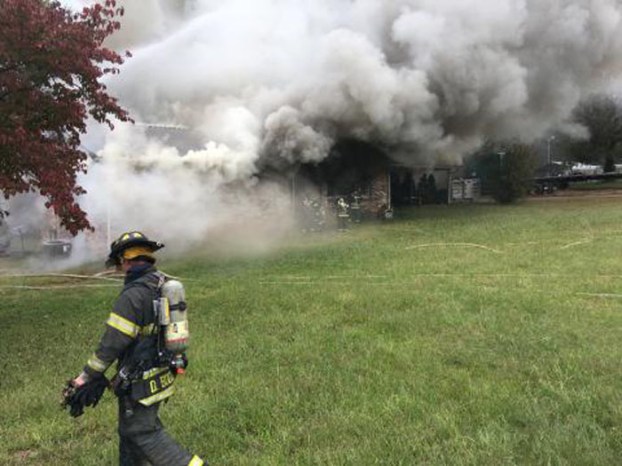 Smoke billows from a fire at a home on Gaskey Road on Tuesday morning. Submitted photo

SALISBURY — Investigators are looking into a Tuesday morning fire at a Gaskey Road home that occurred a few hours after the resident there received an eviction notice.

As of Tuesday evening, investigators said the cause of the fire was undetermined. Fire Investigator Mark Troublefield said further investigation is pending.

“It was fully involved. At that point, we made the decision not to send crews inside because they would have to enter above the fire to get to it,” Alexander said.

Firefighters went into a defensive mode to fight the fire from the outside. Flames went through the first floor and into the attic.

Alexander said that because of the high humidity and heat from the flames, he called in extra manpower, moving the fire up to third alarm.

The home was a total loss, Alexander said.

One firefighter was slightly injured when he fell outside the home in the mud. He was treated at the scene.

Alexander said he could not provide further details on what the occupants said about how they got out and what they noticed. One occupant had reportedly taken in a man and woman not too long ago.

Jerry Boucher has lived in the neighborhood for about 20 years and estimates the occupant had lived at the home for a couple of years. Boucher said the home sat vacant for a few years, then was repaired and the man moved in.

Initially, Boucher didn’t know his neighbor’s house was on fire. He said he thought someone was barbecuing because of all the smoke. Once he went outdoors, he saw a lot of black smoke.

His immediate concern was that his neighbor was still inside, but fire personnel told him that the man had escaped the fire and was fine.

Family friend Shirley Henrickson said she heard the sirens before she drove farther down Gaskey Road. She lives in the area and, after making sure her house wasn’t on fire, drove to check on the occupant.

Henrickson has known the man since he was young because he grew up with her son.

“He was working on a generator in his basement and it exploded, and there was some gas in the floor and it caught that gas and it just ignited,” Henrickson said.

Alexander estimated there were about 40 fire personnel on the scene. Crews from the Faith, Kannapolis, Locke, Salisbury, Landis, China Grove and South Salisbury fire departments responded.

We were all drawn to the same spot in a parking lot on the final day of the Autumn Jubilee... read more