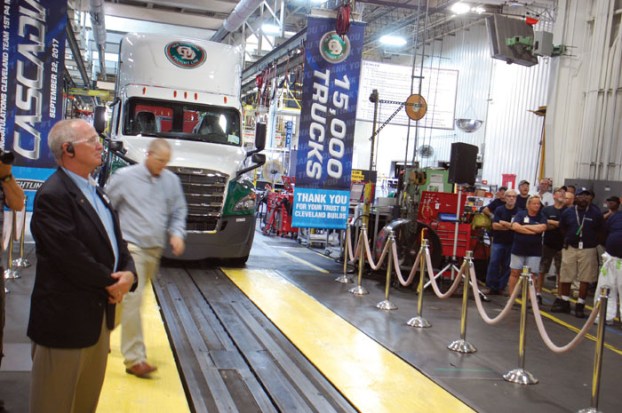 Monday’s occasion also ushered in the start of production at the Cleveland manufacturing plant of the newest Freightliner Cascadia model, which is the company’s top seller.

Daimler Trucks has received 25,000 orders for the new Cascadia version since its launch last September, which tops orders for the first three years of the original Cascadia.

Monday morning, officials with Daimler Trucks handed over the keys to the 15,000th Freightliner truck made for Old Dominion — and the new Cascadia model — to Old Dominion Chief Executive Officer David Congdon.

Congdon has a commercial driver’s license, and he drove the new Cascadia from the end of the assembly line in Cleveland into a back parking lot for pictures.

The new truck was decked out in Old Dominion’s green-and-white colors and trademark “OD” logo.

“I’ll tell you what, they love Freightliners,” Congdon said of his company’s drivers.

Congdon said Old Dominion’s relationship through the years with Freightliner has been fantastic. Chris Backeberg, director of national account sales for Freightliner, said the 15,000th truck milestone celebrates a long friendship and partnership between the two companies.

Another key partner in the Freightliner-Old Dominion relationship has been Peach State, the longtime truck dealership of choice for Old Dominion.

Of the 15,000 Freightliner trucks has built for Old Dominion since 1991, 12,000 have been produced at the Cleveland plant, according to General Manager Henning Bruns.

Workers at the Cleveland plant Monday wore shirts that marked the Old Dominion milestone with the words “15,000 promises and counting.”

“We are very dedicated to Old Dominion,” Bruns told the truck company’s visitors.

Production has increased to more than 80 trucks per shift, and Bruns said the Cleveland plant will build 20,000 trucks this year in its one-shift approach.

Roger Nielsen, president and chief executive officer of Daimler Trucks North America, said his company was honored Old Dominion has placed so much faith in the Freightliner brand. As for the newest Cascadia, Nielsen said, “It is the most advanced truck we have built for the marketplace.”

What Freightliner builds for Old Dominion translates to at least 100 jobs, Nielsen said, while thousands of other jobs are part of the periphery. “We don’t take that lightly,” he said.

The cab/sleeper configurations come in day cab, mid-roof and raised-roof models. The standard Cascadia has a Detroit DD15 engine and Detroit DT12 automated manual transmission. But there also are many optional features.

Congdon told the officials from Daimler Trucks on Monday he had seen the Freightliner trucks represented at the North American Truck Show in Atlanta. “You absolutely stole the show,” he said.

After remarks, a tour of the plant, and Congdon’s brief test run, the Freightliner and Old Dominion representatives had a luncheon in the plant’s truck museum, along with a celebratory cake.

Yesterday: In 1978, first Cannon Mills plant is empty, ready to be torn down

In this photograph published in the Salisbury Post Sept. 12, 1978, Spinning Supervisor Leonard Kiser stands in an empty portion... read more