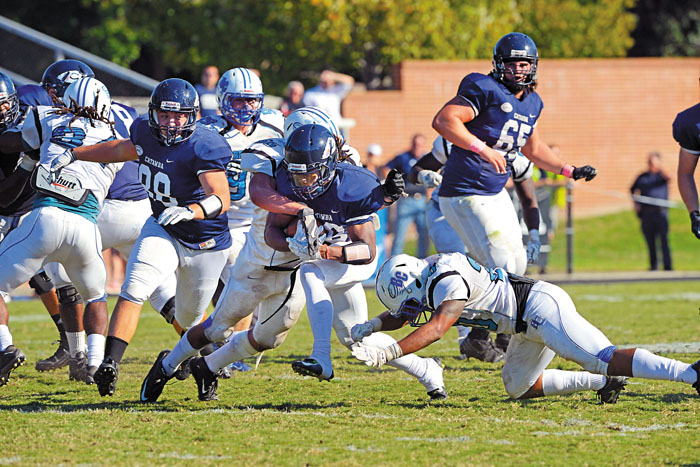 SALISBURY — Outside the program, Josh Beaman’s role with the Catawba football team looks to be minor. He’s a special teams player, not likely to show up on the stat sheet unless you check the long list of names under “game participation.”

“A lot of people think a team leader has to be that guy who gets sacks or scores touchdowns,” Catawba head coach Curtis Walker said. “But Beaman is one of the biggest leaders on our team. He understands the importance of preparation. He leads and he doesn’t just lead on Saturdays. He leads all week long.”

Like everyone good enough to be on the Catawba roster, Beaman was an exceptional high school athlete in high school. He grew up in Troy, an hour southeast of Salisbury, and competed for the West Montgomery High Warriors.

Beaman’s father, Phillip, is an insurance agent, but he’s also a baseball coach, and baseball is the sport in which Josh shined earliest. He pitched and played first and third base and made all-conference for good teams.

Beaman became a starter on the offensive line as a junior and also helped out at defensive end. That was 2012, the season West Montgomery battled North Rowan twice in a span of two weeks. North won in overtime, 20-14, late in the regular season, but West Montgomery won the matchup in the first round of the 1AA playoffs, 34-28.

“We scored on a 25-yard pass with five seconds left to win that game,” Beaman said. “I remember it really well. We played North Rowan four times in two years when I was a sophomore and junior, but my senior year they went back up to 2A, and we didn’t face them.”

In 2013, Beaman’s senior season, West Montgomery won an epic struggle against Swain County in the Western Final and made it to the 1AA  state championship game, a loss to James Kenan High in rain and bitter cold at Winston-Salem’s BB&T Stadium. Beaman earned all-conference accolades and was named Lineman of the Year.

“I was recruited by (former Catawba offensive line coach and current Salisbury High coach) Brian Hinson,” Beaman said. “I liked the campus, liked the program Coach Walker was putting together, and it was only an hour from home. Catawba had a lot of selling points,”

But later “signings” of players recruited as walk-ons continued for months. Thirty more recruits were added to the roster, but practicing football daily as a walk-on with only a slim chance of getting on the field, gradually takes its toll. Injuries also knocked out some players. Of those 30 late roster additions, only Trevor Bembry, who became a starting defensive lineman, backup DB Alex Slusser and Beaman remain on the team.

Beaman was one of the final recruits in that class to be announced. He wasn’t official until June 16.

Beaman is about 220 pounds, but he worked as a guard in practice in 2014 and was redshirted.

“The next year they moved me to tight end, figuring that I would have a better opportunity there, blocking in goal-line situations, things like that,” Beaman said.

The coaches were right. Beaman officially played in his first game against Wingate in the 2015 season and he eventually got on the field for seven games that season. He started against Limestone.

“We won the conference that year, so that’s the highlight of my career so far,” Beaman said. “When we beat Lenoir-Rhyne, here, to win the conference, we stormed the field, and that was one of those moments I’ll take with me the rest of my life. We’ve got a chance to create more moments like that this year, and that’s what I’m working for every day. I try to set a good example for our young players. They see a guy who doesn’t play that much, but is still working as hard as he can every single minute, and they want to follow that kind of example. I set the bar as high as I can.”

Prior to the 2017 season, Beaman moved back to guard, where he works mostly with the developmental squad. He’s on the field on Saturdays on Catawba’s kickoff return team and when he’s blocking on the PAT team.

Since he redshirted in 2014, Beaman would still be eligible to play in 2018, but he’s not going to exercise that option. This will be his last season with the Indians. He’s an excellent accounting student with career opportunities in marketing and/or business waiting on him after graduation, so he’s choosing to move on.

“Financially, it makes a whole lot of sense not to come back,” Beaman said. “But it still was a hard decision, and I don’t want anyone to think I haven’t loved being part of Catawba football.  I’ve got such a passion for football, and that’s something I’ll never lose. I hope that after I graduate I can help a team as a coach.”

In the next few weeks, Beaman plans to make the most of each minute he wears a Catawba uniform, whether it’s practice or game day. Wingate, 5-0 and ranked 24th, visits Catawba for homecoming this Saturday afternoon. After that, there are just four more games in the regular season.

“Beaman relishes every minute he’s on the field, and he doesn’t waver,” Walker said. “He’s that same guy every day, and every day he helps make us a better football team.”

Plop and fizz for Oklahoma, Michigan