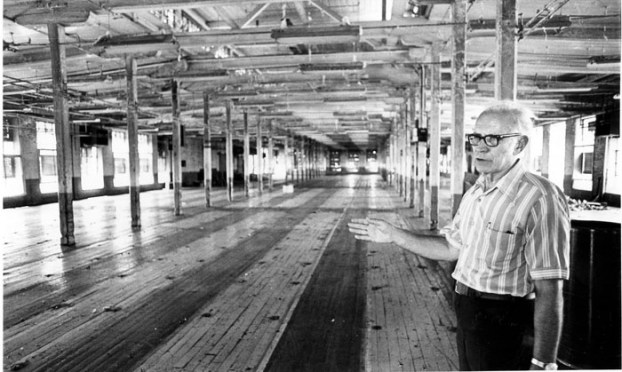 Yesterday: In 1978, first Cannon Mills plant is empty, ready to be torn down

In this photograph published in the Salisbury Post Sept. 12, 1978, Spinning Supervisor Leonard Kiser stands in an empty portion of Cannon Mills’ Plant No. 2  on Franklin Avenue in Concord. Cannon Manufacturing Co., the company that became Kannapolis-based Cannon Mills, actually started in a portion of this Concord plant — in a 76-by-156-foot, two-story brick building in 1887. Many additions and alterations to that plant made the original building hard to recognize. The plant stayed in operation until 1978, when the decision was made to tear it down. Earlier in company history, when Cannon moved its offices to Kannapolis, the new plant there became Plant No. 1, and this original facility was demoted to Plant No. 2. Ed Rankin, a Cannon vice president in 1978, said there was no feasible use for the Concord plant, not even as a museum. Kiser said then, ‘I think if Mr. (Charles) Cannon had been living, he never would have done away with it. It doesn’t bother me too much, but some of the older ones who worked here for so many years come by and, I swear, they want to cry.’

Carlos Euart, who lives in Faith, shared this photograph showing members of the aviation ordnance football team, which had won... read more