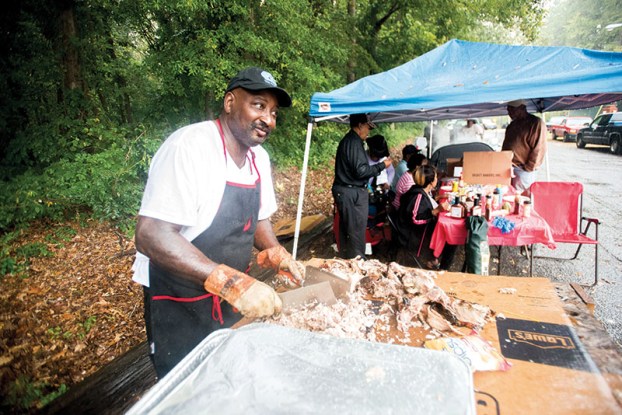 EAST SPENCER — Although the rain pelted her multicolored rain jacket, Shelia Tarver still managed to squeeze in a little dance or two at Saturday’s East Spencer Pig Pickin’ held at Royal Giants Park. The rain kept some people home, but for the people who braved the weather, there was music, basketball and pork.

Tarver attended the event where some members from her church, New Life Community Church, served as volunteers.

“I think it’s a good thing for the community. It gets people to come together, communicate better. I appreciate that they are doing it,” she said.

This is the second year the town has hosted this community event, which began in the backyard of Alderman Curtis Cowan. He’s held a pig pickin’ at his home for over 10 years and when it grew too large, he and the mayor collaborated to bring his family fun to the whole town.

Cowan said this was a way for him to give back to the town. He said despite the rain the turnout was still good.

During the pig pickin’ town volunteers and Parks & Recreation Director Andrew Mitchell took about 50 children, many of whom primarily live in Grant Street Apartments, to a Catawba College athletic event.

“It shows we can work together and make things happen. We have done what we set out to do and that’s make the park useful,” Mallett said.

James Miller, who gave up his tent so a group of men could hand out Bibles, chopped pork in rain.

“It’s great. It’s good for the town and folks in the surrounding area. I hope they continue,” Miller said of the event.

Church members of Grateful Heart Ministries were also on hand to give food to those who wanted or needed it. The church partners with Second Harvest Food Bank of Metrolina to distribute grocery items to those in the community.

The church was asked to participate in the event and share about their faith to anyone who wanted to know more, said Janet Yates.

“I’ve really enjoyed myself. It’s a great experience. We provided for the needs of the people,” said Nathan Harrell, who is a minister at Grateful Heart.

“If someone had told me a year ago that I would be doing this this year, I would not have... read more