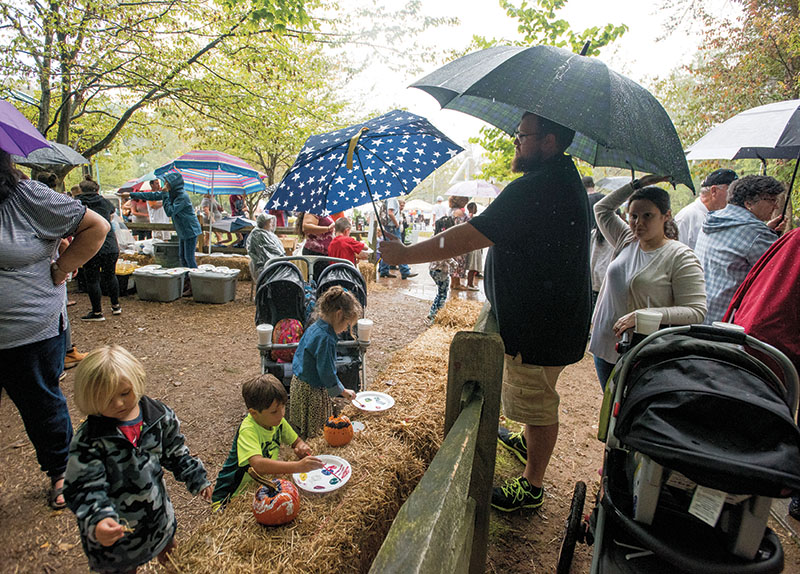 JON C. LAKEY / SALISBURY POST Scott Williams, with his wife Tristy, right, holds an umbrella over 5-year-old Tiffany as she paints a pumpkin. The annual Autumn Jubilee festival at Dan Nicholas Park kicked off on a wet Saturday. Many hearty people did not let the damp conditions stop them from enjoying what has become a fall family tradition.

SALISBURY — The Autumn Jubilee festival was the culmination of an entire weekend of activities for Amanda McIlvoy, who traveled from Aiken, S.C. with her twin boys Jadyn and Myles. The trio spent the day, despite the rain, at the event.

McIlvoy was invited by her cousin, Jackie DeJesus and husband, Victor, along with her parents Ron and Terri McIlvoy, and Jackie’s mother Brenda Alexander, to the festival. They’d attended the Dixie Classic Fair on Friday, Saturday morning with Thomas the Train at the N.C. Transportation Museum’s Day out with Thomas event and then Autumn Jubilee.

Victor said he planned to take them to Little Richard’s Barbecue in Walkertown for dinner. Amanda McIlvoy said she and her boys were having a great time even in the rain.

Ron and Victor half jokingly admitted they were mainly there at the festival for the pork chop sandwiches. Alexander was convinced over a year ago to move to North Carolina from her south Florida home by her daughter and son-in-law.

She said it was the best decision and she loves it in North Carolina.

“North Carolina is a beautiful state,” she gushed.

Arlette Oglesby along with her sisters, Dionne Johnson and Dawn Mitchell have attended Autumn Jubilee for years with their mother, Janice Mitchell.

The women estimate they’ve been going to the event for over 10 years and agreed they look the most forward to the food and crafts.

Oglesby said she loves the annual event because of the family atmosphere as well as the turkey legs and meat on a stick.

Corey Rorie traveled from Cabarrus County to be with with about 25 to 30 of his friends and family. It was the first time he and daughter, Lay’onni, 3, had an opportunity to attend.

He said the first thing the children were drawn to was painting a pumpkin of their own.

“I like it. It’s something good for the kids and family. It’s gets us ready and prepared for the fall and the holidays,” Rorie said.

He said his family holiday gatherings are this heavily attended as well.

Pennsylvania resident Jane Ireland and her 5-year-old son Liam planned a weekend camping trip to visit their Salisbury friends back in August. It was their first time attending Autumn Jubilee. They drove eight hours and despite the rain they were there to have a good time. The two were camping at Carolina Country Campground.

Frances Driscoll sat under a slightly leaky tent in the heritage section of the festival weaving on a small wooden loom. She’s been weaving since forever, she joked.

It was a skill that she sort of fell into after her college roommate who was an art major got her into it, but Driscoll said she never found the wherewithal to teach anyone else the skill.

She’s set up a tent and table over the years for the festival, but this year found herself under a borrowed one for the rainy day event. She brought four different looms, one of which she bought at Cline’s Antique Shop in Cabarrus County.

She said she didn’t know how to weave on the loom and bought it with a completed project that she’s hoping one day someone will explain to her.

“What takes time is getting ready,” she said of the process.

Some may have seen Driscoll at Germanfest at the Old Stone House in years past.

“I have an opportunity to see people I taught in high school,” she said of the event.

Hundreds of vendors of every imaginable craft filled the park including angels made from tomato cages, girls’ hair ribbons and nostalgic wooden duck toys.

The event and activities continue today beginning at 10 a.m. and ending at 6 p.m. at Dan Nicholas Park, 6800 Bringle Ferry Road.