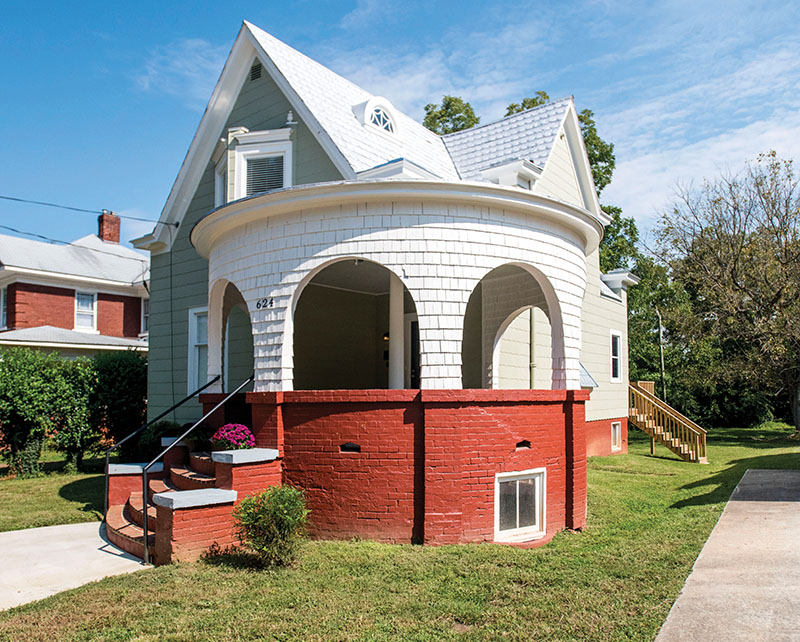 Lynch-Nicholson House – 624 W. Monroe St. This house was built for Mary Alice Lynch, an instructor and librarian at Livingstone College. The college’s second president, William H. Goler, was instrumental in developing the surrounding area and built this house as well as others with the help of college students. JON C. LAKEY / SALISBURY POST 1907

By Reginald W. Brown
Special to the Salisbury Post

Two homes in Salisbury’s West End will be shown on the Historic Salisbury Foundation’s 2017 OctoberTour.

The first is the Lynch-Nicholson House at 624 W. Monroe St. that was built around 1907. It acts as the gateway to the eastern edge of the Livingstone College Historic District.

The second is the Joseph C. Price House constructed around 1884 at 828 W. Monroe St. and can be considered the center of the District. Both houses are on a route once known as College Avenue before being annexed into the City of Salisbury around 1915.

The Lynch-Nicholson house is the first of six properties Livingstone College and the foundation agreed to rehabilitate and exemplifies the completion of a work in progress on last year’s tour. The circular front porch with center column and Romanesque arches and a hint of Queen Ann architecture render a unique exterior character to the home. A refurbished special interior feature is a curved stained glass window in the stairwell and front hall. The residence now stands fully restored and is ready to house a Livingstone College faculty member.

The Lynch-Nicholson House was originally built for Mary Alice Lynch (1860-1928) and her mother, Maria. Mary Alice Lynch was a Livingstone instructor, librarian and North Carolina temperance activist in the late 19th and early 20th centuries. She led a state movement against the consumption of alcohol and established a college temperance union at Livingstone when Price was president. The family and widow of John W. Nicholson (1904-1966), chairman of the Price High School science department from the late 1940s to mid-1960s, was the home’s last full-time occupant.

The second home is that of Joseph Charles Price (1854 – 1893), a founder and first president of Livingstone College, his wife, Jennie Smallwood (1862-1945), and their descendants. Today it remains in the family and is for sale. A North Carolina Highway Historical marker and a huge menacing grizzly bear monument in Livingstone’s Friendship Plaza identify it. The bruin stands watch over the oldest house in today’s West End.

The two-story Victorian single-family house was built with bricks made by students in the campus brickyards. It features a rocking chair covered front porch facing southward and along part of the home’s westward side. A portico extends from the porch to shelter its front entrance. William H. Goler, who would be Livingstone’s second president and the builder of the Lynch-Nicholson House, was its contractor.

The home’s primary interior feature is a handcrafted mantle with fireplace surround in the dinning room. It was designed and built by the college’s industrial students as a gift to Price. A stained-glass window that illuminates a front hallway and stairwell to the second floor is another inside feature.

The Price House and Livingstone College stand as memorials to Price, who came from humble beginnings. He was born Feb. 10, 1854,  the only child of a free woman of color and a slave who was sold away near Elizabeth City. His life ended as a college president Oct. 25, 1893 at the age of 39. Price died from chronic nephritis in his home surrounded by friends, faculty and family. His resting place is in a mausoleum in Livingstone’s Poets and Dreamers Garden on the eastern end of the campus.

Price was celebrated as a world-famous orator, educator, civil rights advocate, an apostle of exercising self-help, an AME Zion minister and temperance campaigner. He converted a theological institute into a college that addressed the academic, spiritual, and vocational challenges African Americans faced after slavery and the many years that followed.

The homes of Mary Lynch and Joseph Charles Price are examples of two late 19th- and early 20th-century structures that sheltered the households of people committed to education, spiritual uplift and self-help through the home.

It was Price who said,

“No race can rise above the dead level of the home. If we are to act for the best interests of ourselves and the country, education must enter into our homes and give to them tone and character.”