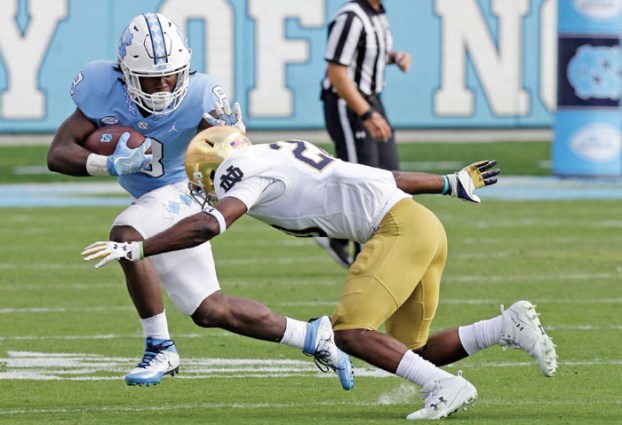 CHAPEL HILL (AP) — Notre Dame didn’t have its starting quarterback, and its best runner was limited by dehydration. The Fighting Irish also had to operate in rainy conditions on the road.

And they did just fine.

Josh Adams ran for 118 yards, including a 73-yard touchdown, and No. 21 Notre Dame stuck with its strong ground game to beat North Carolina 33-10 on Saturday.

Adams, ranked among the national rushing leaders, carried the ball just 13 times before leaving the game. But Deon McIntosh added 124 yards rushing and two scores for the Fighting Irish (5-1), who won a third straight road game against a power-conference opponent despite not having starting quarterback Brandon Wimbush due to a right foot injury.

“We needed some resolve and some mental toughness,” Notre Dame coach Brian Kelly said, “and we showed that today.”

Wimbush was on the sideline as the No. 2 QB behind first-time starter Ian Book. The sophomore, who had thrown just eight passes this season, was 17 of 31 for 146 yards and a touchdown while running for 45 yards. He also threw two interceptions.

Still, the Fighting Irish had no trouble earning their fourth straight win by at least 20 points since a 20-19 loss to Georgia on Sept. 9, the first time they have accomplished that feat since 2005.

Chazz Surratt threw a 25-yard touchdown pass to Anthony Ratliff-Williams before halftime in the only noteworthy offensive play for the Tar Heels (1-5). North Carolina finished with 265 yards and eight three-and-outs in its second straight lackluster showing.

BOSTON (AP) — It might have looked easy for three quarters or so.

For Virginia Tech coach Justin Fuente, though, it was enough to give him indigestion.

One week after a loss to No. 2 Clemson, the Hokies (5-1, 1-1 Atlantic Coast Conference) opened a 23-3 lead and coasted before BC made a tepid fourth-quarter rally. Josh Jackson threw for 322 yards and a touchdown, finding Sean Savoy nine times for 139 yards, including a 53-yard catch-and-run on a slant pattern in the first quarter.

In all, six different receivers caught passes to make up for a first-quarter injury to No. 1 receiver Cam Phillips.

CHARLOTTESVILLE, Va. (AP) — There was adversity aplenty for Virginia in its Atlantic Coast Conference opener against Duke.

Kurt Benkert threw an interception that was returned for a touchdown in a miserable first quarter for him. The Cavaliers’ offense couldn’t get going against an aggressive defensive front for the Blue Devils. And Duke went ahead late in the second quarter, 14-7.

But unlike recent Virginia teams, the Cavaliers bounced back and won 28-21 on Saturday. Benkert threw three touchdown passes as they reeled of 21 straight points, the defense held Duke to 255 yards and made a stand in the closing minutes to finish off their third consecutive victory Saturday.

TALLAHASSEE, Fla. (AP) — With 1:24 remaining, it appeared Florida State had rallied again in the fourth quarter to beat No. 13 Miami and extend its winning streak over its Sunshine state rival.

Malik Rosier and the Hurricanes weren’t quite done, though.

The junior drove Miami 75 yards in nine plays, throwing a 23-yard touchdown pass to Darrell Langham with 6 seconds left and Miami beat Florida State 24-20 on Saturday to end a seven-game losing streak in the series.

Rosier though found Langham in single coverage up the right sideline and he beat Tarvarus McFadden. Langham, who had not played until the final series, was able to get the ball over the goal line before his knee touched. Following a long replay review, the play stood.

Upshaw and Moore both ran for a touchdown and wide receiver Malik Williams threw a touchdown pass to Thomas Hennigan on a trick play in-between as Appalachian State (3-2, 2-0 Sun Belt Conference) scored the final 21 points of the game and finished with 31 points after turnovers.

Taylor Lamb, who threw two interceptions after entering the game with a streak of 213 passes without a pick, ran 38 yards for a score early in the fourth quarter to pull the Mountaineers into a tie at 24.

The Aggies (2-4, 0-2) answered with a 61-yard touchdown pass from Tyler Rogers to Jason Huntley. The Mountaineers tied it again as Upshaw went 10 yards for a score. The 27-yard trick play put ASU up with 5:42 to go and Moore iced it with a 56-yard burst.

Harper, Zimmerman hit homers to lift Nationals past Cubs, even the NLDS