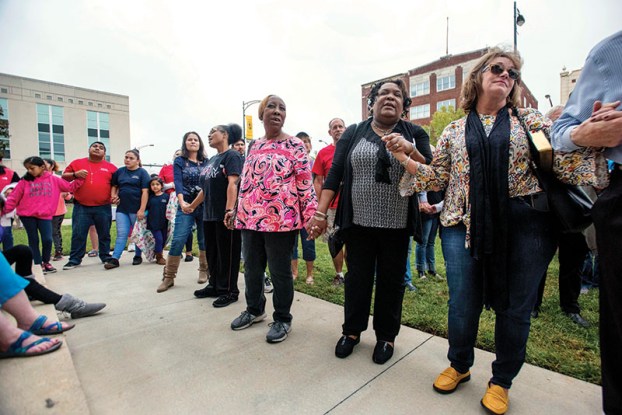 JON C. LAKEY / SALISBURY POST The participants in the Pray Rowan event joined hands for the final song by Alexis Greer. The rain held off long enough for an hour of prayers to be offered by several hundred Christians that gathered on the steps of the Rowan County courthouse on Saturday morning for the first meeting of Pray Rowan.

SALISBURY — Minister Emily Rivers clutched her coffee in one hand and her head bowed as she stood during a grassroots prayer movement that brought hundreds to the lawn of the Rowan County courthouse on a Saturday morning.

Rivers, who attends Mount Zion Missionary Baptist Church, was among those who attended the Pray Rowan gathering.

“We are in a place right now where no one else can help us but God,” Rivers said.

This event is history in the making, she said.

There’s a lot of mothers who’ve lost children in this community to violence and they are crying, Rivers said.

“This is symbolic. This is what heaven looks like,” she said of the diverse gathering.

The idea for the program started in the hearts of Father Lucas Rossi of Sacred Heart Catholic Church and local resident Tonya Skelly, who is a development associate with the Billy Graham Library.

Skelly started a June prayer breakfast that included local pastors and their wives as well as local leaders. She had a desire to have a prayer event in her community. Rossi, at the same time, had a tug on his heart in early spring to have a prayer movement or rally in the city.

Jim and Mary Blassingame were at the event and learned of it through their pastor, Bill Godair, of Cornerstone Church.

“It’s very important because our city is in trouble. Our youth are in trouble. Believers have to come together as one,” Jim said.

“Prayer is the key. That’s what we need to do, especially with all this violence going on today,” Mary said.

The hourlong program included short prayers for public servants, education, marriages and family, as well as the economy, drugs and the crime issues, love and unity.

“It’s important that we pray as a community. We wanted to be part of the community that prays for the community, especially during hard times and stressful times,” said Jude Joseph. He and his family including his wife, Nalini.

Gia Barnes drove with her children over an hour from Monroe to attend the event after hearing about it from friend Tonya Skelly.

Barnes attended a similar event in Union County and so she felt it was worth the drive to attend in Rowan County.

“It’s very important for the community to come together to pray. So many things happen. It’s going to take the saints of God praying in unified prayer,” Barnes said.

“Today, I’ve seen Hispanics, blacks, whites and Middle Eastern people worship in harmony. The book of Matthew says the kingdom of God suffers violence and the violent will take it by force. Today, Rowan County has taken this city by force of prayer. I am so proud to be a part of the movement to heal our city,” said Daniel Matangira.

Visit Facebook and search @prayrowan or prayrowan@gmail.com for more information.

By Shavonne Walker shavonne.walker@salisburypost.com SALISBURY — The Autumn Jubilee festival was the culmination of an entire weekend of activities for... read more