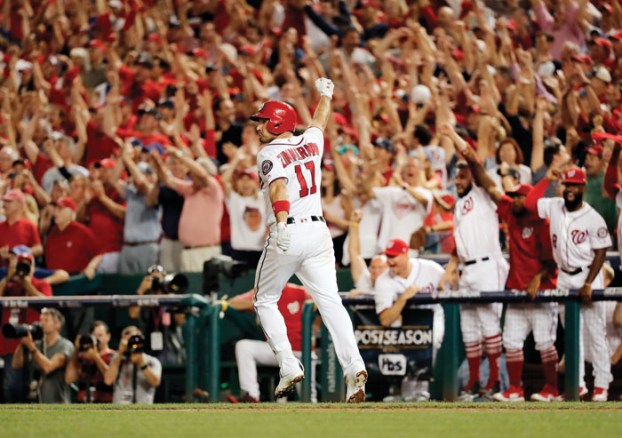 Harper, Zimmerman hit homers to lift Nationals past Cubs, even the NLDS

WASHINGTON (AP) — Things were looking bleak for Bryce Harper, Ryan Zimmerman and the rest of the Washington Nationals. They had accumulated one run and four hits through the first 16 innings of their NL Division Series against the Chicago Cubs.

The situation was hardly ideal. Neither was the mood.

“You do your best to keep your spirits up. You get frustrated,” Zimmerman acknowledged. “I don’t want to say ‘pressure,’ but, yeah, I mean, the tension builds a little bit, I’ll be honest with you. … Pouting is not going to help you the next time you come up.”

Power, though, will. Harper delivered a no-doubt-about-it , tying two-run homer in the eighth, and Zimmerman tacked on a three-run shot that barely made it over the wall moments later, lifting the Nationals to a 6-3 comeback victory over the defending World Series champions on Saturday, evening their NLDS at a game apiece.

“Sometimes,” Zimmerman said, “it takes kind of just one hit for everyone to exhale.”

The Nationals were in serious danger of falling behind 2-0 in the series, entering the eighth trailing 3-1 after being shut out in Game 1. But the NL East champions broke out with five runs and four hits, thanks to two big swings from 2015 NL MVP Harper — only recently back from a left knee injury that sidelined him for 42 games — and longtime face of the franchise Zimmerman.

“I was kind of bewildered, because it’s not too many teams or pitchers that have held us in check like that for a couple days,” Nationals manager Dusty Baker said. “I just knew in the bottom of my heart that we were going to explode for some numbers, which we’ve done all year.”

Indeed, his team reached franchise highs for runs and homers this season, and the Nationals were the only club in the majors with four players — including Harper and Zimmerman — who each topped 20 homers and 85 RBIs.

The NLDS moves to Wrigley Field for Game 3 on Monday. The Cubs will have July acquisition Jose Quintana on the mound, while the Nationals finally send out two-time Cy Young Award winner Max Scherzer, who was pushed back in the rotation because of an injured right hamstring.

Yes, this matchup is suddenly a contest, and not a moment too soon for Washington, which has won four division titles in the past six years but never won a playoff series.

Jon Lester held Washington to one run and two hits through six innings in Game 2, but Cubs manager Joe Maddon turned to his bullpen and everything changed.

Pinch hitter Adam Lind led off the eighth with a single in the first playoff at-bat of a career that has spanned more than a decade and 1,344 regular-season games.

Carl Edwards Jr. then went to a 3-1 count against Harper and hung a curveball.

“I thought about taking the whole way,” Harper said. “And then I saw the loop in the curveball and said, ‘Why not swing as hard as you can?’ Got barrel on it. Pretty good moment.”

He took a moment to admire his shot before chucking his bat to the ground as the ball reached the second deck in right field. Harper’s teammates in the dugout reacted immediately, screaming and raising fists as the ball tore through the night air.

Maddon defended his decision to have the righty-throwing Edwards pitch to the lefty-batting Harper.

“He made a bad pitch and the guy didn’t miss it, and that’s it. Sometimes that happens. Bryce is good. C.J. is good,” Maddon said. “Bryce got him.”

With fans in the crowd of 43,860 roaring and twirling red towels, Harper jumped up the dugout steps for a curtain call, throwing an uppercut. Then he flipped his hair on his way back to rejoin his teammates after his fifth homer in 16 career postseason games.

“It’s unbelievable what he does and how he does it,” Gonzalez continued. “He’s a story, a movie, everything all in one.”

It was the first extra-base hit for Harper since returning from the disabled list during the last week of September after missing 42 games with an injured left knee. He was only 4 for 25 overall in the regular season and playoffs after coming back until that key, possibly series-altering, at-bat.

After the next two men reached, Zimmerman stepped in to face Mike Montgomery. This has been a renaissance year for the first baseman, who had only 15 homers and 46 RBIs during an injury-plagued 2016, but led the Nationals this season with 36 homers and 108 RBIs.

On an evening when balls carried in 12 mph wind — every run scored on a homer — Zimmerman’s high shot somehow just made it far enough in left field.

At what point did Zimmerman realize the ball was gone?

“When it landed in the flower bed, I guess,” he joked. “Maybe got a little lucky. Who knows?”

As he began running the bases, Zimmerman jutted his right fist out, then spread both arms wide, the way a kid pretends to be an airplane.

That made a winner of Oliver Perez, who pitched to one man in the eighth, inducing an inning-ending double play off Rizzo’s bat. The last of Washington’s six pitchers, closer Sean Doolittle, worked the ninth for his first postseason save.

“We had them where we wanted them,” Montgomery said, “and we couldn’t get the job done.”

Rizzo became the Cubs’ career leader in postseason homers (six) and RBIs (16). His two-run homer was barehanded by a man in a No. 17 Kris Bryant Cubs jersey and with a camera slung around his neck. The spectator reached over a railing to grab it; after an umpire review, the initial ruling that it was a home run stood.

Scherzer finally makes his 15th career postseason start; he is 4-4 with a 3.74 ERA. Quintana, meanwhile, will be making his playoff debut and first appearance against the Nationals.