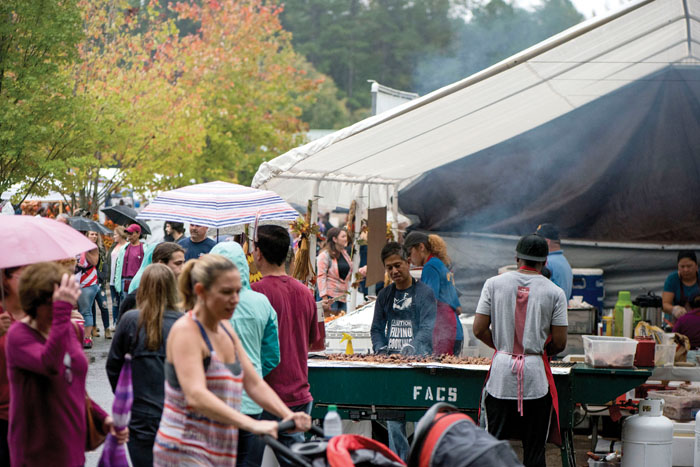 JON C. LAKEY / SALISBURY POST The annual Autumn Jubilee festival at Dan Nicholas Park kicked off on a wet Saturday. Many hearty people did not let the dampened conditions from stopping them and enjoying what has become a fall family tradition. Saturday, October 7, 2017, in Salisbury, N.C.

The opioid crisis is clearly the most immediate and critical public health concern for this area. Rowan and Cabarrus counties have topped all other counties in the state lately in the rate of opioid overdose cases handled by hospital emergency rooms. The situation is dangerously out of control.

Even so, Rowan has other, deeper health issues that also need attention. And one of them is smoking.

Rowan’s statistics included some bright spots, though, including a decrease in cigarette smoking — the single largest cause of preventable disease and death. The percentage of Rowan adults who smoke has declined from 30 percent in 2010 to 20 percent now, an improvement encouraged by laws prohibiting smoking in restaurants and bars. Rowan’s smoking rate is still higher than the state average of 19 percent, but the county is making progress.

The county has reportedly been inching toward this decision for some time. Reducing smoking is one of the Rowan’s top health priorities, along with fighting drug abuse and reducing obesity.

Healthy Rowan, a group of community organizations collaborating on health issues, is now part of The Duke Endowment’s initiative, Healthy People, Healthy Carolinas. They work on the premise that health and well-being are created and sustained not just through individual and clinical efforts, but also through the cooperation and support of the whole community.

Our whole community can help reduce smoking — again, the single largest cause of preventable disease and death — and improve our collective health by making our parks smoke-free.

In a smoke-free park, people would be encouraged to be active and outdoors without cigarettes. Children, asthma sufferers and others with health concerns would be protected from secondhand smoke. Park leaders have wisely been scaling back the areas where smoking is allowed; they should look now at the impact of taking the final step to a smoke-free environment. Such a decision would not come without controversy, but the health benefits could be far more substantial.