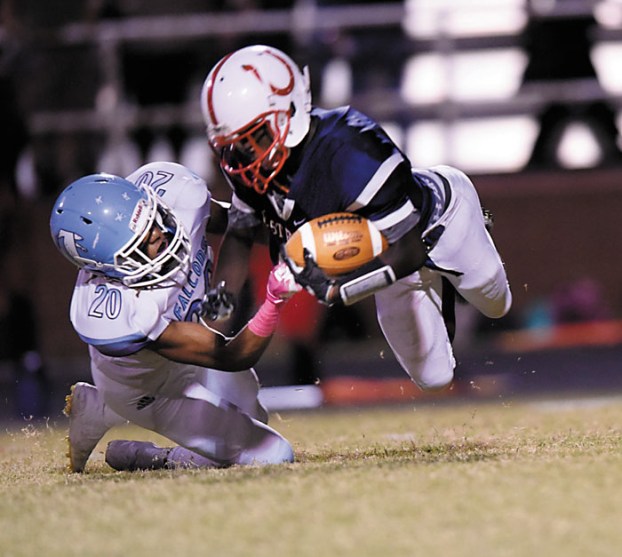 GRANITE QUARRY —  East Rowan put on an impressive display with their running attack Friday night but the Mustangs simply had no answer for a visiting West Rowan team that dominated all phases of the game and cruised to a 54-27 win.

The Falcons were deadly efficient as they exploded for three scores in a one-minute span of the first quarter, effectively putting the game away early. In doing so, West used punt returns, fumble recoveries, interceptions, blocked punts and a quick-hitting passing game to dominate the game throughout.

“We challenged our players to start fast this week and they responded,” said West head coach Joe Nixon. “I was very pleased with our opening half of football where we scored 41 points on just 12 offensive snaps. Everything was working for us.”

The dominating win was the third in a row for the Falcons (4-3, 1-0), as they opened their North Piedmont Conference schedule with the lopsided win over their cross-county rivals. The Mustangs (2-5, 0-1 NPC) dropped their fourth in a row, despite racking up 338 yards rushing on 59 carries — with running backs Noah Green and freshman  Sammy Pinkney both surpassing the 100-yard mark.  But the turnovers and other miscues were just too much for any team to overcome.

“I had no idea I did that,” said Green, a seldom-used runner in the Mustangs’ triple-option attack who came through with 122 yards on 18 carries and scored once. “I barely carry the ball most games, but our offensive line played great and made it possible for me to do something like that. But we just made a few too many errors and that hurt us.”

The explosive nature of the Falcons was on full display in the first period with a rapid-fire succession of touchdowns. It started with a 61-yard punt return by Jalen Houston that set up the first score — a 9-yard run by Jayden Jones (51 yards, 2 TD’s). West’s Anthony Chance then pounced on an East fumble at the Mustang 22. Falcons’ QB Payne Stolsworth then connected on the first of his three TD passes of the night, hitting Houston over the middle and in the end zone.

The score quickly went to 21-0 when Joojo Brush picked off a pass from East QB Jax Fitz at the Mustangs’ 29. Senior Martavio Rankin plowed in from three yards out for the score. The sequence took from the 7:05 mark to 6:02 in the first quarter, as the Falcons took full control.

The onslaught continued in the opening minutes of the second period when West took over at their 45-yard line after a punt. Stolsworth found the speedy Houston again on a screen pass that quickly turned into a 55-yard scoring sprint to make it 28-0.

East finally put together a sustained 66-yard drive behind the running of Green and a 27-yard pass from reserve quarterback Logan Forbis to Gabe Hinceman. Green ran up the middle for 17 yards to get East on the board, midway in the second period. But West responded quickly as Malcolm Ingram returned  the ensuing  kickoff 49 yards to the East 41. Two plays later, halfback Jayden Jones scored the first of his two TDs on  a 22-yard sprint off right tackle, making it 34-7.

Then came the Falcons’ dagger play as they forced another East punt on the next series and turned it into a touchdown. Fitz tried to execute a rugby type kick but linebacker Daniel Durham was on the spot for a block. Ingram  scooped the ball up at the 35-yard line and raced for a Falcons score that made it 41-7, with 4:16 remaining before halftime.

East managed a score just before intermission on a 3-yard Sam Wall dive play, but all of the damage had been done.

West struck quickly in the third quarter after another fumble recovery as Stolsworth executed the screen pass to perfection again, hitting Ty’Kese Warren for a 61-yard  catch-and-score, making it 48-13.

“We were just taking what they gave us plus what we created,” Stolsworth said of his three-touchdown passing night, giving the junior 37 scoring tosses for his career. “It was a big conference win and the next step toward us winning a conference championship.”

The rest of the second half  featured more scoring by both teams, but primarily, in mop-up mode. East got a pair of TD runs by Deiontae Gallmon in the final period while Falcons’ runner Jesse Baker scored on a 14-yard run.

West now heads back home for a crucial NPC showdown with a strong South Iredell team next Friday that will likely determine the Falcons’ conference championship fate. East will be at home next Friday as they welcome county rival Carson for Homecoming.

“We know South Iredell is a very good football team,” Nixon said. “We always try to get better each week and we will definitely have to get better next week to be able to play with them. We are looking forward to it as a team.”

By Mike London mike.london@salisburypost.com MOUNT ULLA — Senior Day at West Rowan for “Tabby & Abby” was either going to be... read more