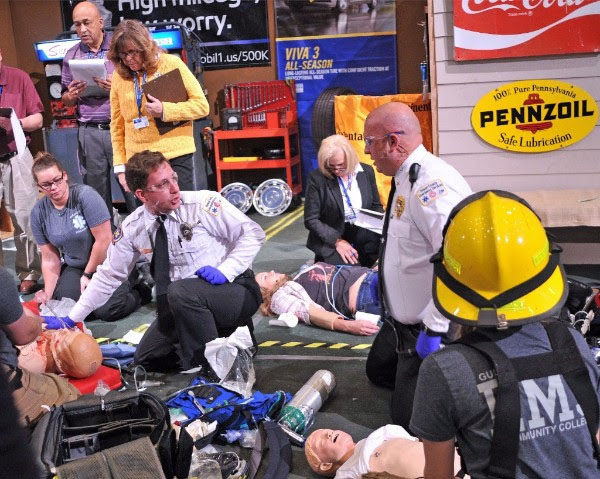 GREENSBORO — A team from Rowan County gave the top performance in a competition with five other teams at the North Carolina Paramedic Championship.

Daniel Medina and Aaron Thurston claimed top honors in the 27th annual Paramedic Competition, held Sunday at the Koury Convention Center during the annual Emergency Medicine Today Conference, according to a statement from the N.C. Department of Health and Human Services.

The competition is sponsored by the N.C. Office of Emergency Medical Services.

Tom Mitchell, chief of that agency, announced the winners to cheers in a banquet hall packed with hundreds of paramedics, EMTs and county emergency services medical directors. Mitchell had words of praise for all this year’s competitors.

“All of the contenders truly are winners,” Mitchell said. “They are the best of the best and are on the leading edge of performance in emergency medical response. We offer our special congratulations to this year’s winners, Rowan County EMS.”

During the competition, teams were sequestered and drew lots to determine their order. Each was called out to face a room full of peers and treat simulated medical conditions and injuries to victims at a local auto repair shop constructed inside the Koury Convention Center. In the scenario, two mechanics were working on a tow truck when they discovered a toddler locked alone in a hot car parked outside the garage and called 911.

The competing teams arrived on the scene and began treating the child. Moments later, the child’s mother appeared asking about the child’s condition and exhibiting signs of serious illness. The paramedics were unaware the mother had just consumed cocaine and was about to suffer cardiac trauma.

Shortly after starting treatment for the mother, who now had symptoms of a heart attack, the two mechanics at the auto repair shop were blasted by hot liquid from an exploding radiator. With four patients to manage, the crews determined which patients had the most serious injuries and treated them appropriately.

With only 13 minutes to spare, they had to move quickly and decisively using their education and training to provide lifesaving care to the victims. Paramedics were allowed to use first responders to assist while they rendered the most critical care.

The annual competition provides a training opportunity not only for the competitors but also for the paramedics and EMTs who observe each team’s analysis and reaction to the scenario from bleachers positioned a short distance away. Large video screens display close-up views of procedures.

Through the Office of Emergency Medical Services, the state Department of Health and Human Services works to foster emergency medical systems, trauma systems and credentialed EMS personnel to improve responses to emergencies and disasters. For more information, visit ncems.org.