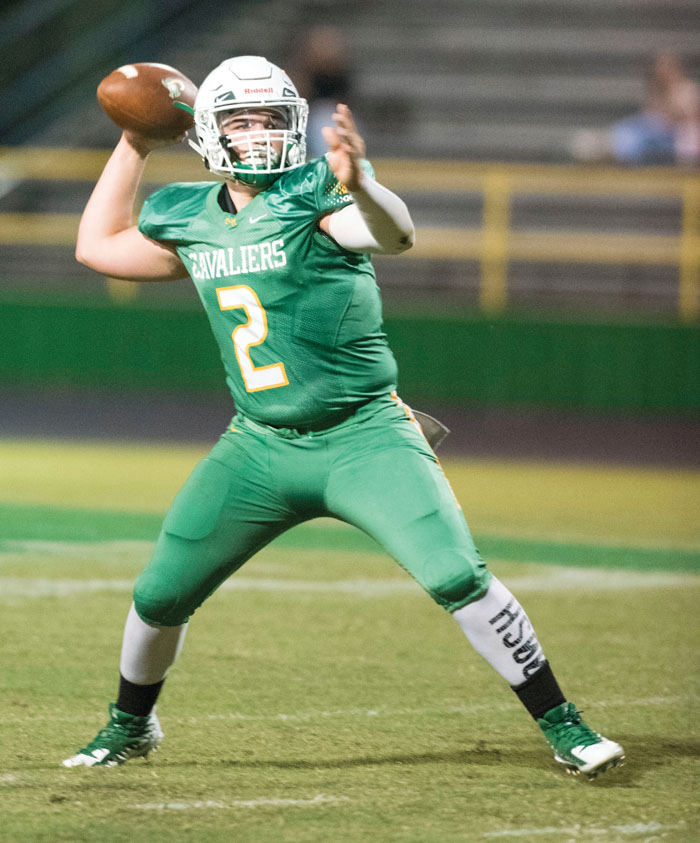 Staff report
ALBEMARLE — Yadkin Valley Conference defenses are gearing up to stop Jaleel Webster and Malcolm Wilson on the ground, but North Rowan is proving it can also throw effectively.

Willis Mitchell fired three more touchdown passes on Friday and the Cavaliers crushed Albemarle, 41-7, on the road, to stay tied for first place with North Stanly.

“Willis is having one heck of a year, and being able to throw the ball is really helping our running game,” North coach Ben Hampton said. “Willis had one interception that probably was unwarranted, but he really commanded the offense tonight.”

Mitchell put North (6-1. 3-0 VYC) ahead in the first quarter with a touchdown pass to Stanton Bailey.

“Our defense was pretty solid most of the night,” Hampton said. “But on that one play they fumbled the ball around in the backfield and then they got outside on us.”

Wilson scored the first of his three TDs on the ground to make it 14-7. Then, 49 seconds before halftime, Mitchell found Wilson with the scoring pass that put North ahead 21-7 at the break.

Then it was all North in the second half.

“Linebackers Tyzai Lyles and Jordan Goodine were big in the second half,” Hampton said.

Webster got his only TD of the night midway through the third quarter to push the lead to 28-7.

North, ranked seventh in 1A,  finished off the Bulldogs with Mitchell’s TD pass to Denerio Robinson with 9:08 left to play and another rushing TD by Wilson with 5:27 remaining.

“I was pleased with our effort,” Hampton said. “But the negative was that it was still a penalty-plagued game. We’ve got a lot of things to fix because we’ve got tough games ahead of us.”

South Rowan puts it all together, whips West Davidson