Packers-Cowboys: A great NFL rivalry is renewed on Sunday 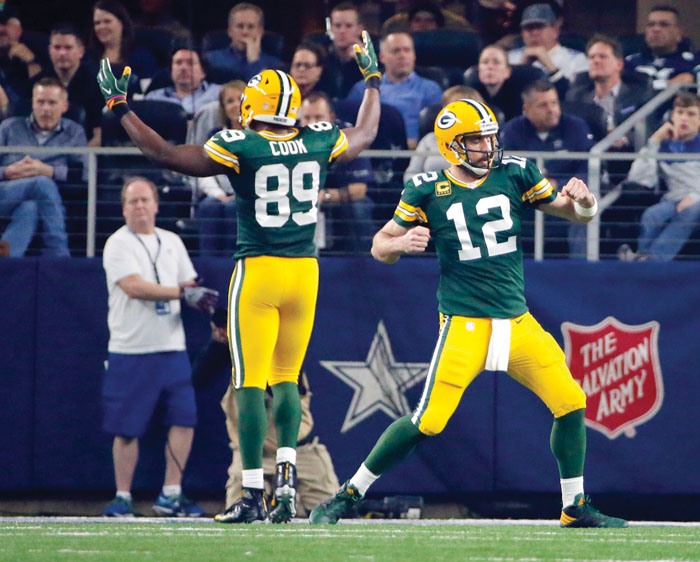 AP Photo/Tony Gutierrez, File ... In this file photo from last Jan. 15, Green Bay Packers’ Aaron Rodgers (12) and Jared Cook (89) celebrate after a touchdown during the NFL divisional playoff game against the Dallas Cowboys. Packers-Cowboys has been one of the NFL’s most entertaining and meaningful rivalries for decades. They’ll be back at it on Sunday when Green Bay (3-1) visits Dallas (2-2).

From Lombardi and Landry through Reggie and Brett, Troy and Emmitt.

From the tundra of Lambeau to the gap in the Texas Stadium roof to Jerry’s palace.

Packers-Cowboys has been one of the NFL’s most entertaining and meaningful rivalries for decades. Whether it was the Ice Bowl or A-Rod’s impromptu pass to Jared Cook, people (and players and coaches) remember these matchups.

“Ahhh, yeah,” says Packers receiver Jordy Nelson, who leads the league with five TD catches. “It’s a good conversation, for the fans. There’s a lot of history there in the past, and I think we’ve had a lot of history just recently, too, and we played them, I think in my 10 years nine times or so, eight times.

“And so it’s just some big games; big games and some incredible finishes. Hopefully, there’s another one.”

For anyone who really could forget it, this is a rematch of the Packers’ 34-31 divisional playoff win in January when Aaron Rodgers completed a 35-yard pass to Jared Cook on third-and-20 with 3 seconds left. That set up Mason Crosby’s 51-yard field goal as time expired.

Cowboys tight end Jason Witten recognizes why the Packers are so formidable, especially for Dallas.

“I just think the entire organization, what they’ve built, starts with Aaron Rodgers and the way he plays,” Witten says. “I think we have so much respect for their defense, Clay Matthews and the way they attack as a football team. They’re a blueprint in a lot of ways, and more than anything they’ve played well at critical times throughout the last seven, eight, 10 years.”

Tom Brady threw for 303 yards and one touchdown, and New England’s porous defense showed signs of improvement. The Super Bowl champion Patriot (3-2) rebounded from a last-second loss to Carolina, despite Brady turning the ball over twice — on his first interception in eight regular-season games and a fumble on one of Tampa Bay’s three sacks. Neither of the mistakes led to points for Tampa Bay (2-2), which was unable to do much offensively until the fourth quarter.

Key game in the NFC West as the Rams, whose offense has been sizzling behind running back Todd Gurley and a rapidly improving QB Jared Goff, can establish their credentials against the division boss, Seattle. Gurley is back in 2015 Offensive Rookie of the Year form, gaining 215 yards from scrimmage in a win at Dallas. He has 596 yards rushing/receiving, second-highest total in the NFL to Chiefs rookie Kareem Hunt.

Unless the Texans lay an egg as they did against Jacksonville in the opener, they should provide a strong test for the league’s only unbeaten squad. Kansas City has won 26 of its past 30 regular-season games, but never looked as good as now, with Andy Reid’s offense humming behind Hunt and quarterback Alex Smith. Get this: The Chiefs have not committed a turnover since their first offensive play from scrimmage in Week 1, Hunt’s fumble on his initial NFL carry. He’s made up for it big time.

Houston has come on defensively even without J.J. Watt being the major force. Watt does not have a sack, but he has 4½ sacks, a forced fumble and fumble return combined in his past three meetings with KC.

Cam Newton got himself in hot water off the field with his snide remark to a female reporter, hardly the kind of spotlight the Panthers need against Detroit. These should be bright days in Charlotte after Newton won a franchise-record 54th game last week at the Patriots. Newton was 22 for 29 for 316 yards with three TDs, one interception, and he ran for a score to extend the NFL QB record with 50 rushing TDs.

The Lions are an officiating review that overruled a last-minute touchdown away from being unbeaten. They lead the league with 11 takeaways and seven interceptions. Carolina is a minus-5, with Newton being picked off that many times.

The Panthers do have Julius Peppers back plaguing quarterbacks. Matthew Stafford knows the 37-year-old pass rusher all too well.

“He looks like the Julius Peppers I’ve played against my entire career,” Stafford says. “Obviously still extremely big and athletic, a ton of veteran savvy now, and he’s playing really well. Getting in the backfield, disrupting loose plays, getting after the quarterback, doing it all.”

The Eagles haven’t been doing it all — they rank 30th against the pass — yet they’re atop the NFC’s tough East division. In the clutch, Philly comes through, whether it’s stopping the run (second overall) or finding balance with the ball. The Eagles have scored 20-plus points in eight consecutive games, the longest current streak in the NFL.

Is there a more up-and-down bunch than the Jaguars? They romp in wins over Houston and Baltimore. They are inconsistent and at times inept, in losses to the Titans and Jets.

Defense has been the key to Buffalo’s surprising start and first-place standing in the AFC East. The Bills have held all four opponents to 17 or fewer points, a franchise record to start a season. Only once have they yielded 300 yards so far.

Fans might be changing their viewing plans for what previously seemed a not-so-prime-time matchup.

With the Bears starting second overall draft choice Mitch Trubisky at quarterback for the ineffective Mike Glennon, it might be worth tuning in.

The Dolphins finally get a real home game. They haven’t played at Hard Rock Stadium since Aug. 17, with Hurricane Irma forcing postponement of the opener. And they haven’t played very well on the road, scoring a total of six points in the past two weeks. Their offense ranks dead last.

But Miami could get a break because Titans QB Marcus Mariota left last week’s debacle in Houston with a hamstring problem. Matt Cassel is the unremarkable backup.

Two weeks ago, these teams were undefeated. Then the Ravens’ offense disappeared — the defense remains formidable — and the Raiders began getting hurt. In particular, quarterback Derek Carr damaged his back and will be replaced by E.J. Manuel this Sunday. Manuel must get better results on third downs: Oakland went 2 for 23 in the losses.

Takeaways could allow one team to, uh, take away the win. Baltimore leads the NFL with nine picks; Oakland has none. But the Ravens also have turned over the ball nine times.

OK, raise your hand if you thought the Jets would win two games this season, let alone in the opening month. Unless you work in Florham Park, New Jersey, and wear green jerseys on Sundays, we don’t believe you.

Yet there they are, following up two road defeats with a pair of home victories over Florida teams. It seems unfathomable, but a victory at Cleveland could put the Jets on top of the division.

The Browns went 1-15 in 2016, winning in Game 15. For all the rebuilding and optimism, they appear to have regressed. Getting routed at home by previously winless Cincinnati was ugly.

The 2004 draft’s first round produced Eli Manning and Philip Rivers. Both have impressive — some would say Hall of Fame — credentials.

This is only the third time they have faced off, and the Chargers have won the past three meetings, including 2005 with Rivers sitting behind Drew Brees.

Good news out of Indy: Andrew Luck is practicing.

Bad news out of Indy: Luck is doing very limited work and there’s no projection on when he can take the field in a game.