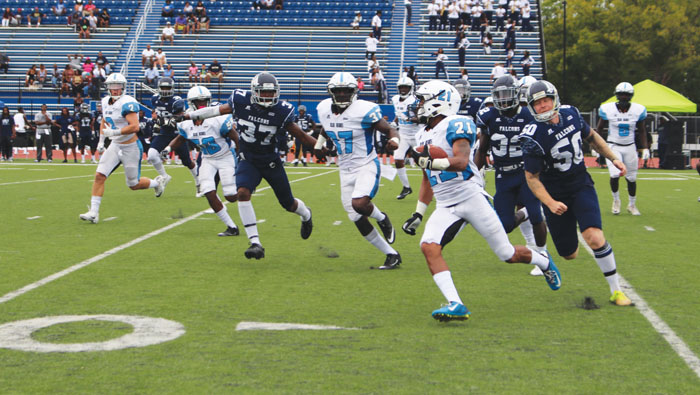 Just when it appeared that Livingstone might taste victory for the first time this season, a back-up quarterback and kicker became heroes for St. Augustine’s.

Demetrius Lewis, playing for injured starting quarterback Darryl Johnson, led the Falcons on a 10-play, 64-yard drive in just over a minute, setting up the winning kick.

“This one stings and the kids are really upset,” said Livingstone head coach Daryl Williams. “But it is what it is. We’ll be back at the drawing board tomorrow and get ready to go for next week.”

Saturday’s ending ruined a nice effort by the Blue Bears, who themselves had driven 81 yards in 17 plays to take a short-lived, 29-27 lead. Running back Jarius Richardson scored on a 7-yard run with 1:37 remaining.

The potential winning drive saw a nice mixture of run and pass, led by sophomore quarterback Xavier Longerbeam. Richardson picked up 29 yards on the ground during the march and Longerbeam completed three passes for 50 yards, including a clutch 15-yarder to receiver Spencer Ludin on a fourth-and-eight play at the Falcons’ 36-yard line.

“That was such a great drive to take the lead,” said Williams. “And then to lose it on a field goal with eight seconds left … it’s crazy. But their kid made a good kick.”

After Richardson’s touchdown made it 29-27, Williams decided to go for a two-point conversion, instead of kicking the PAT for a three-point lead. Richardson had a run-pass option on the two-point try, but couldn’t complete the pass.

“We wanted to end the football game right there … make them have to score a touchdown to beat us,” Williams said of the failed conversion attempt. “It was a bang-bang play. The receiver was open in the back of the end zone but we just didn’t complete the pass. That play has worked before but it’s just one of those things.”

Still, St. Augustine’s had to go down the field quickly against a Livingstone defense which had shut out the Falcons in both the second and third quarters. But Lewis, who hurt the Blue Bears all day with quarterback draws, quickly completed five passes and ran for 23 yards during the final drive — including an 11-yard run to the LC 6-yard line. The kicker took care of things from there.

Lewis rushed for 157 yards on 26 tries and completed 15 of 29 passes for 158 yards. He had three touchdown tosses but also threw three interceptions, one of which Livingstone safety Jarod Richardson returned 22 yards for a second-quarter TD.

Meanwhile, Livingstone rolled up 416 total yards, 255 coming on the ground. Jarius Richardson apparently returned to full strength after battling an ankle injury. The senior had 124 yards on 26 carries and the one score.

Behind Richardson was Justin Ruffin, of Salisbury, who ran for 99 yards on 10 carries, including a long, 63-yard gallop.

“We’ve been working on the running game,” added Williams. “We’ve got a stable of running backs and the offensive line worked hard. The line also pass protected pretty well.”

Longerbeam completed 13 of 25 passes for 130 yards, but did throw two interceptions. He also had a first-quarter fumble that was turned into a 5-yard scoop-and-score by St. Augustine’s Devaughn Taylor.

Longerbeam had two short runs for touchdowns in the first half, as the Blue Bears overcame an early 20-6 deficit to lead at halftime, 23-20. Longerbeam’s scoring plunges came after he orchestrated drives of 75 and 92 yards.

Everett Ransom led Livingstone’s receiving with six catches for 82 yards. He had a 31-yard gain on a double pass play from fellow receiver Andrew Gamble.

On defense, senior lineman Amond Cox made eight tackles, including 1.5 for losses. In addition to his interception, Jarod Richardson had six tackles, as did Frankie Soloman.

Two other Blue Bears had interceptions with nice returns — Walter Watkins for 32 yards and Gregory Hines for 17.

A week after Livingstone had very few penalties, the Blue Bears were flagged 10 times for 118 yards.

“We slipped and reverted back in the penalty department and we didn’t take full advantage of all our opportunities after their (four) turnovers,” said Williams. “But the guys fought hard and we had our chances.”