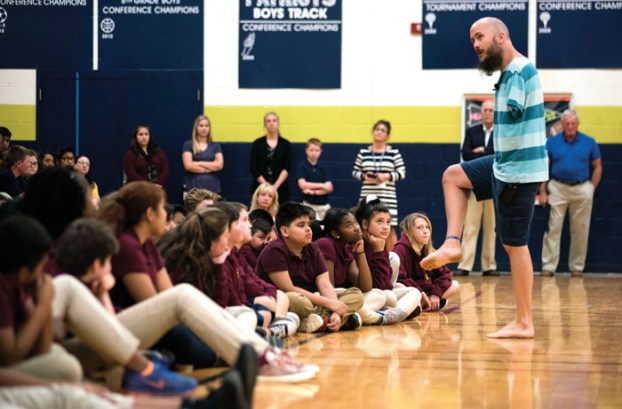 In their uniforms, students at Southeast Middle School listen to Daniel Ritchie, a motivational speaker for the Game Plan for Life program. Jon C. Lakey/Salisbury Post

SALISBURY — Game Plan for Life is making the rounds in Rowan-Salisbury Schools this fall. This week, it had an important message for sixth-graders at Southeast Middle School: Don’t give up on your dreams — or on yourself.

The nonprofit organization encourages students to make good decisions by bringing motivational speakers into schools to discourage underage drinking and share stories about handling and overcoming adversity. The Rowan/Kannapolis ABC Board, Rowan County Sheriff’s Office and Salisbury Police Department work together to bring the program to local schools.

At Southeast Middle, speakers took time to talk to students about bullying and making good decisions.

“Your decisions equal your destiny,” said Al Wood, a former University of North Carolina at Chapel Hill basketball player who went on to play in the NBA. “The very decisions you make today are going to determine what your tomorrow will look like.”

Wood told students to speak up if they see a fellow student being bullied. He reminded them that they were a team.

“When you have good teamwork, everything succeeds in that teamwork,” he said.

Richie Parker and Daniel Ritchie also spoke. Both men were born without arms and have adapted to use their feet for everyday tasks — from driving to eating. Parker followed his dream, becoming a vehicle designer in motorsports.

But he struggled as a child.

“One of the most important decisions I had to make when I was younger was frankly to believe in myself,” he said.

Ritchie said he had faced bullying as a child because of his lack of arms. He was told he would never be able to get an education or a job or be married. But Ritchie said he didn’t let those words hold him back — he went to school, got a job and is married with two children.

And everyone has struggles that can potentially hold them back, he said.

“That’s part of being a person,” he said. “We have to face trials and hardships and frustrations.”

Ritchie and Parker’s struggle is just more visible than most.

“It’s hard to miss two sleeves that flap in the wind,” Ritchie joked.

But students shouldn’t let their struggles hold them back or compare their difficulties or talents with those of others, he said.

“You cannot do that,” he said. “You can’t compare yourself to the person sitting next to you. … You have talents. You have things God has given you.”

The two ended their talk on an encouraging note, telling students to reach for their dreams.

“As you go through life, if you want anything bad enough, it won’t seem too difficult,” Parker said.

The assembly finished with upbeat, live music from Nigel Smith and Friends.

Southeast Middle Principal Jennifer Lentz said she felt Tuesday’s Game Plan for Life presentation was the best the school had ever had.

GREENSBORO — A team from Rowan County gave the top performance in a competition with five other teams at the North Carolina... read more