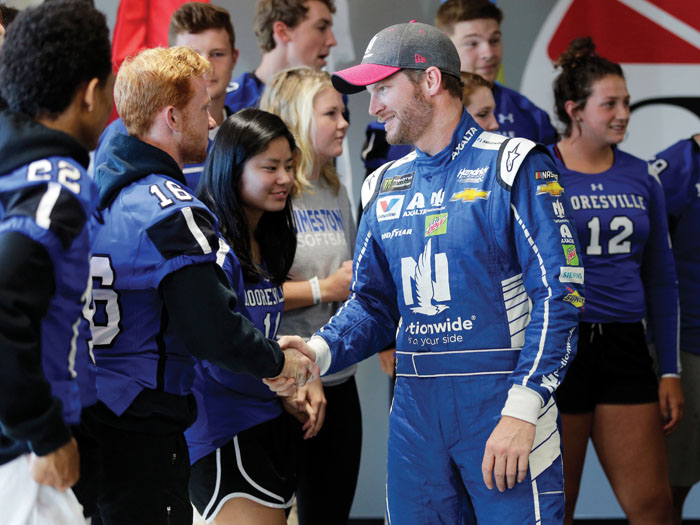 CONCORD (AP) — Dale Earnhardt Jr.’s final weekend as a full-time driver at Charlotte Motor Speedway got off to a rough start when he crashed moments into Friday’s opening practice.

Earnhardt drove into the high line of the track and slipped in the grippy substance Charlotte officials had used on the surface. It caused him to hit the wall and his Hendrick Motorsports team had to pull out his backup car.

Earnhardt wasn’t very happy about his misfortune and felt the compound — known as PJ1 — was too slick.

“I’m avoiding it until somebody can go up there and shows me there is a lap up there,” said Earnhardt. “I ain’t going near it, on purpose. Might end up it accidentally a few times, but I don’t think anybody is willing to go up there without seeing somebody do it first. It’s obviously very slick. It’s like ice.”

The day picked up after practice when Earnhardt was given his retirement gift from Charlotte Motor Speedway: $100,000 to establish the Dale Earnhardt Jr. Concussion Research Fund at Carolinas Healthcare System’s Levine’s Children’s Hospital. The gift will underwrite ImPACT baseline concussion testing for more than 10,000 students in eight area counties. Mooresville High School, Earnhardt’s alma mater, will be added to the program that includes “blink reflexometry” research.

Members of the Mooresville High School football team were on hand for the presentation, and Earnhardt shook hands with each of them. He’s retiring at the end of the season, in part because of multiple concussions he’s received while racing.

Earnhardt has requested tracks to consider gift that will impact the local community during his retirement tour rather than give him extravagant items.

“I didn’t’ need any silly stuff or goofy gifts that I’m just going to go store away in a warehouse that you’ll never see,” Earnhardt said. “I thought this was a great opportunity to make an impact in each community and I feel real blessed. I can’t imagine there’s anything I need or they could come up with that I’d be ‘Yeah, I’ve been looking for this!’

“It just feels so good to see others be helped. I want everybody to be happy, that’s kind of my thing, the way I’ve always been. Hopefully this season makes a lot of people happy.”

Hamlin topped qualifying Friday night for the NASCAR Cup playoff race Sunday at Charlotte Motor Speedway, marking the 13th straight year he has captured a pole on the top circuit.

“I knew the time was running out to get a pole because I hadn’t won one this year,” said Hamlin about his 25th career pole. “I wanted to keep the streak of winning one every year alive.”

Hamlin turned a lap at 191.598 mph in the No. 11 Toyota on the 1 1/2-mile oval for his first pole of the season. He’ll share the front row with Joe Gibbs Racing teammate Matt Kenseth.

Hamlin has wins at New Hampshire and Darlington this year, but has never won at Charlotte. However, he has always run well here with 15 top 10s and seven top 5s at CMS. He attributes that success to things he’s learned from teammates Kenseth and Kyle Busch.

“I love coming to this track because we do run really, really well here, so I’m glad to see it’s in the sweet spot of the playoffs where we can really make some hay,” Hamlin said.

Dale Earnhardt Jr., who is racing for the final time at Charlotte, qualified 23rd in a backup car after he crashed just moments into practice .

Busch wore a “VegasStrong” t-shirt under his fire suit to honor the victims of the mass shooting earlier this week in the racing brothers’ hometown.

Jimmie Johnson, a seven-time NASCAR champion with eight victories at Charlotte, did not advance out of the first round and will start 25th. Johnson was considered a strong contender to win this race given his given his history, but the poor qualifying may have dealt him a tough blow.

Johnson said it will be difficult to fight his way up through the field.

Earnhardt Jr.’s final weekend as a full-time driver at his home track got off to a bad start after crashing on a slick surface in practice.

Track officials added a substance — called PJ11 — to the high line of the track to improve grip. Earnhardt drove his car high early in the afternoon practice session, slipped and hit the wall, prompting his Hendrick Motorsports team to pull out his backup car.

Earnhardt thought the track was too slick.

“I’m avoiding it until somebody can go up there and shows me there is a lap up there,” said Earnhardt. “I ain’t going near it, on purpose. Might end up it accidentally a few times, but I don’t think anybody is willing to go up there without seeing somebody do it first. It’s obviously very slick. It’s like ice.”

None of the drivers crashed during qualifying.

Martin Truex Jr. said he thinks the track surface will get better and better as the weekend progresses.

“I think we just need some cars to run on that stuff and wear it in and get the track kind of prepped,” Truex said. “Certainly I don’t think anyone expected it to be as challenging as it was. Maybe for the future we definitely need to look at a different way to prep the track so when we go out there guys aren’t running into the wall.”