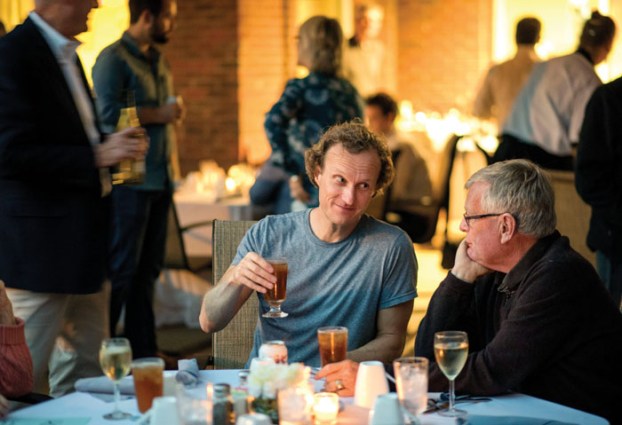 Holger Thews, left, listens to David Midgley at dinner at Trinity Oaks describe what to expect from the sweet tea that he is getting ready to try for the first time. Members of the Landesbühnen Sachsen theater company, a professional traveling repertory theater of the German province of Saxony, arrived in Salisbury on Wednesday evening for a three-week stay. The group is in town for celebrations marking the 500th year of the Reformation. Jon C. Lakey/Salisbury Post

SALISBURY — They come from a land known for beer, pretzels and umlauts, and we give them a hearty welcome, or “Willkommen!”

But for the 14 actors, musicians and production personnel here for the much anticipated performances of “In God’s Own Country,” it was time Thursday to acclimate to new surroundings and start rehearsals.

The Germans’ plane arrived in Charlotte late Wednesday afternoon, and a Downtown Salisbury Inc. trolley picked them up and delivered the visitors to a small reception and dinner at Trinity Oaks about 7 p.m.

Another partner in making the North American debut of “In God’s Own Country” possible has been St. John’s Lutheran Church in Salisbury, as Lutherans throughout the nation celebrate the 500th anniversary of the Reformation.

“In God’s Own Country” tells the story of Heinrich Mühlenberg’s struggle to establish the Lutheran Church in America, but it also zeroes in on what German immigrants faced as they came to the colonies in search of religious and political freedom.

Central themes of this production, set centuries ago, touch on the search for asylum, civic responsibility, and cultural and religious tolerance.

“We’re telling a story that really has (a lot) to do with the people who live here,” Taubert said, referencing the strong German heritage in parts of Rowan County. “… It’s a story about right now, too.”

In Germany, there have been 14 full performances (and two condensed versions) of “In God’s Own Country.” Taubert, who wrote the English translation for the drama, said it has been well-received in both indoor and outdoor venues.

While Taubert and Piedmont Players Director Reid Leonard have been managing all kinds of moving parts to make this Reformation-celebration production possible, an important bridge between the oceans has been Catawba College junior Austin Young.

A 2015 graduate of Carson High School, Young served an internship with the German theater company in Dresden for about six months before coming home in July.

In Germany, Young was the stage manager’s assistant, and he acted in two roles while becoming much more familiar with the language.

Young traveled to Charlotte in the trolley and met the German group. He said he knows it’s a cliche, but seeing everyone again was like connecting with family.

“He knows the show inside and out,” Taubert said. “… We were so happy to see Austin at the airport.”

After they had cleared customs and escaped the bustling airport Wednesday, the German entourage made a quick stop at a Wendy’s on the Speedway Boulevard exit off Interstate 85. Taubert insisted they try Cheerwine there as their introduction to Salisbury.

Mark Slusser, the trolley driver, said, “I’m thinking, ‘OK, if that’s what they want,’ plus we were ahead of schedule.”

When they stopped, several in the group also wanted to buy cigarettes.

On arriving at Trinity Oaks, Young bounded from the trolley and announced, “I come bearing Germans!”

Trinity Oaks is providing the daily transportation to the Meroney Theater and downtown Salisbury. The visitors also are welcome to have meals in the Trinity Oaks dining hall.

“We’ve told all the residents to invite them to eat with them,” Trinity Oaks Executive Director Bill Johnson said. “… They’re going to have a lot of opportunity to mingle with the residents.”

Thews will spend part of his three-week stay with Molrine and part with Midgley. “It’s a perfect match,” Molrine said.

Thews was introduced to sweet iced tea Wednesday night and gave his approval to the Southern thirst-quencher.

Taubert will stay in three different Trinity Oaks residences over her three weeks in Salisbury. She’s starting out with Henry and Missy Brown, then Jill and Jack Connery, then Martha Hildreth. “This is just real exciting,” Missy Brown said.

Taubert and Henry Brown met for the first time a year ago, when Taubert was here to see her father, who lives in China Grove. She and Henry are pretty sure they are distant cousins.

“We’re going to get out the old Brown book and see how we’re related,” Missy Brown promised.

Both Henry and Jane’s roots connect with Michael Braun (whose family name eventually became Brown), the German settler who built the 1766 Old Stone House in Granite Quarry. Taubert hopes to visit the Old Stone House with her German contingent sometime during their stay.

Leonard and Taubert — with help from Young — face a challenge of putting together close to 35 actors from two countries, a community choir of 42 singers and a German vocal quintet — Ensemble Nobiles.

Most of the community choir members come from St. John’s Lutheran, and the church’s minister of music, Rob Durocher, will be the choir’s director.

The German quintet will be guests and sing at the 11 a.m. service of St. John’s this Sunday.

Growing up, Jane Brown Taubert attended St. Mark’s Lutheran Church on N.C. 150 and graduated in 1985 from South Rowan High School. As a teen, she was a frequent visitor to St. John’s Lutheran because of her connection to Karl Kinard, from whom she took voice, piano and organ lessons.

Taubert considers Kinard her mentor and credits him with helping her pursue her education at Lenoir-Rhyne University. “I owe him so much,” she said.

Taubert graduated from Lenoir-Rhyne in 1989 with a bachelor’s degree in vocal performance, and she has lived in Germany for the past 27 years with her German husband. She has been with the Landesbühnen Sachsen theater company for the past 25 years.

Taubert resides close to Dresden, and most of the German visitors are from Dresden and Leipzig.

Managing all the paperwork for their trip to the United States was a bit more complicated than just obtaining passports. The German visitors required visas because they would be working during their stay in the United States. At one point, they all had to travel to Berlin to take care of the documentation.

This is the first trip to America for several in the group.

The theater company members packed two big trunks with costumes and hand-held props and sent them by freight carrier to Charlotte. Taubert had to return to the airport Thursday to pick up those trunks.

Taubert says her English translation of “In God’s Own Country” retains a lot of German language elements. “We call this the bilingual version,” she said, putting the drama at about an 80-20 split in favor of English — not enough to scare off the audience.

The play is an adaption by Olaf Hörbe of the historical novel by Eberhard Görner. Paul Heller arranged the music.

Taubert tries to visit the United States at least once a year to see her father, who attends Lutheran Chapel Church. Her mother died about five years ago.

The German group will have two days off between the Oct. 15 and 18 performances, and Taubert hopes they can take some excursions to places such as the Old Stone House and Old Salem.

After Salisbury, the Germans will give performances in Hickory at Lenoir-Rhyne University, then on to the Philadelphia area for performances at Augustus Lutheran Church in Trappe. Mühlenberg arrived from Germany in 1742 and settled in Trappe.

“Old Trappe Church” still stands and is the oldest unchanged Lutheran church in continuous use in the country.

In Lancaster, Pennsylvania, members of the Braun family that eventually settled in Rowan County belonged to one of Mühlenberg’s Lutheran congregations, Taubert said.

It’s proof again we live in a small world — from umlauts to Cheerwine.

The Historic Salisbury Foundation has acquired the McCanless-Busby-Thompson House at 128 W. Thomas St. After a demolition hearing for the house was scheduled for... read more