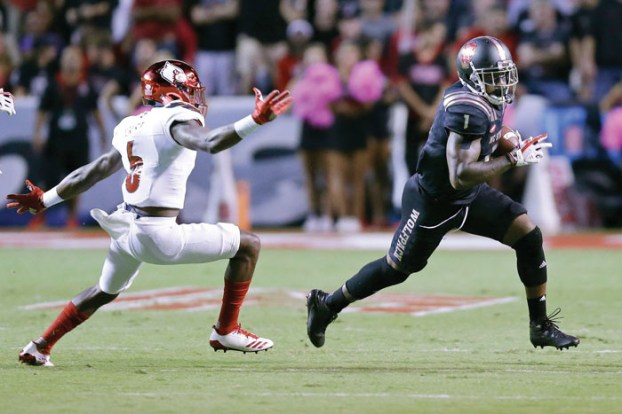 By AARON BEARD, AP Sports Writer
RALEIGH (AP) — Nyheim Hines ran for two touchdowns and Ryan Finley threw for another to help No. 24 North Carolina State beat No. 17 Louisville 39-25 on Thursday night.
Hines ran for 102 yards and had a 48-yard kickoff return in the fourth quarter that helped set up a touchdown drive for the Wolfpack (5-1, 3-0 Atlantic Coast Conference).
Finley threw for 367 yards and a 48-yard score to Kelvin Harmon, part of N.C. State’s 520 total yards on a night it never trailed against the Cardinals (4-2, 1-2).
Then there was the Wolfpack’s defensive front, which kept the pressure on reigning Heisman Trophy winner Lamar Jackson.
“They don’t want to be denied what they feel is theirs right now,” Wolfpack coach Dave Doeren said. “There’s no flinch in these guys, I can tell you that.”
Jackson ran for his second touchdown to pull the Cardinals to 32-25 with 4:10 left, then got the ball back with a chance to tie it. But linebacker Germaine Pratt picked up a deflected pass and returned it 25 yards — blasting through an attempted tackle by Jackson near the goal line — for a clinching score with 2:52 left.
“We’ve got a lot of work to do,” Cardinals coach Bobby Petrino said. “I’m not getting it done. I’ve got to do a better job with our coaches, do a better job with our players and get back on the right track.”
THE TAKEAWAY
Louisville: The Cardinals didn’t do much to slow the Wolfpack to offset some of Jackson’s usual brilliance, and that might have all but ended Louisville’s title hopes in the league’s Atlantic Division. They had already lost at home to reigning national champion Clemson and now find themselves two games back in the standings.
N.C. State: That’s the first 3-0 start in the ACC play for the Wolfpack since 2002. And with wins over Florida State and Louisville, the preseason dark horse in the Atlantic Division has beaten two of the teams picked to finish higher in the standings to position itself as the division’s likely top challenger to Clemson.
UP NEXT
Louisville: The Cardinals host Boston College on Oct. 14.
N.C. State: N.C. State visits Pittsburgh on Oct. 14 in cross-division league matchup.
___
More AP college football: http://collegefootball.ap.org and http://www.twitter.com/AP_Top25
___
Follow Aaron Beard on Twitter at http://www.twitter.com/aaronbeardap

By Mike London mike.london@salisburypost.com MOUNT ULLA — Senior Day at West Rowan for “Tabby & Abby” was either going to be... read more