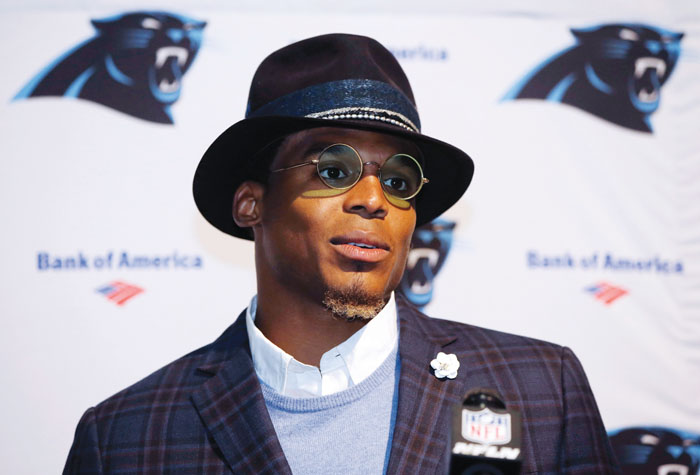 CHARLOTTE (AP) — Cam Newton apologized in a Twitter video post Thursday night for sexist comments made to a female reporter.

“After careful thought, I understand that my word choice was extremely degrading and disrespectful to women,” the Carolina Panthers quarterback said at the start of the nearly two-minute video. “To be honest, that was not my intentions. And if you are a person who took offense to what I said, I sincerely apologize to you.”

The NFL released a statement Wednesday saying that Newton’s response to the question was “just plain wrong and disrespectful to the exceptional female reporters and all journalists who cover our league.”

Dannon, the maker of Oikos yogurt, cut ties with spokesman Newton on Thursday. Company spokesperson Michael Neuwirth released a statement saying it was “shocked and disheartened” at the former league MVP’s behavior and comments toward Jourdan Rodrigue, a Charlotte Observer reporter.

The Dannon statement noted the company perceives Newton’s comments as “sexist and disparaging to all women. …  It’s simply not ok to belittle anyone based on gender. We have shared our concerns with Cam and will no longer work with him.”

The NFL released a statement on Wednesday saying that Newton’s response to the question was “just plain wrong and disrespectful to the exceptional female reporters and all journalists who cover our league.”

But it doesn’t appear there will be any punishment handed out to Newton.

“I think there are conversations going on at the club level with the appropriate people, with the Panthers,” NFL spokesman Joe Lockhart said in a conference call Thursday. “I don’t want to anticipate the league stepping in there.”

Panthers coach Ron Rivera addressed the situation briefly during his press conference Thursday, saying, “I think Cam made a mistake. I understand he had a conversation where he pretty much said he shouldn’t have said, what he said.”

Rodrigue issued a statement Wednesday evening saying she and Newton did speak after the news conference, but said the quarterback didn’t apologize for his remarks.

Rodrigue was back in the locker room on Thursday, flanked by Mike Persinger, the executive sports editor of The Charlotte Observer.

She issued an apology herself on Thursday after coming under fire for using a racial slur in tweets she posted about four years ago.

The tweets were first reported by BlackSportsOnline.com.

“I apologize for the offensive tweets form my Twitter account from 4/5 years ago,” Rodrigue said on her Twitter account. “There is no excuse for these tweets and the sentiment behind them. I am deeply sorry and apologize.”

Rodrigue was a college student at Arizona State at the time of the tweets. When asked about the tweets, Persinger said “she has owned them and apologized for them.”

Newton’s teammate Thomas Davis said he doesn’t think the issue will affect the team as it prepares for the game against Detroit on Sunday.

Persinger said Wednesday evening that Newton’s comments were “unfortunate and out of line.”

The Associated Press Sports Editors announced that it “agrees wholeheartedly that Mr. Newton’s response was out of line” and “we ask for a formal apology to Jourdan Rodrigue from Mr. Newton and the Carolina Panthers organization.”