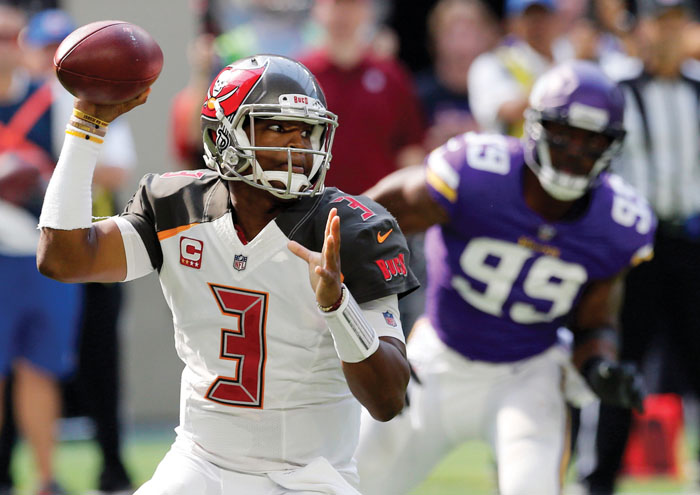 FILE - In this Sept. 24, 2017, file photo, Tampa Bay Buccaneers quarterback Jameis Winston (3) throws a pass during the first half of an NFL football game against the Minnesota Vikings in Minneapolis. Winston is excited about the next challenge in the maturation of the young Tampa Bay Buccaneers, a prime-time test against Tom Brady and the defending Super Bowl champion New England Patriots. (AP Photo/Jim Mone, File)

TAMPA, Fla. (AP) — Jameis Winston is excited about the next challenge in the maturation of the young Tampa Bay Buccaneers, a prime-time test against Tom Brady and the Super Bowl champion New England Patriots.

“Really just a blessing for me personally,” the 23-year-old quarterback said, looking ahead to Thursday night’s matchup at Raymond James Stadium, where the up-and-coming Bucs (2-1) have won six straight going back to last season.

New England (2-2) enters the match searching for answers on defense, trying to avoid falling below .500 beyond the second week of a season for the first time since 2012.

“I don’t like talking about me, but to get a chance to witness greatness in front of us with Tom Brady coming into town, it gets you pumped up,” Winston added. “It definitely makes you think about how hard you worked to get to this point. I’m thinking about what I’m going to say to him when I see him and meet him.”

The third-year pro often speaks of having aspirations to someday be recognized as the best to ever play his position. Brady has won more games than any QB in NFL history, including five Super Bowl championships, and Winston has spent a considerable amount of time studying him, Peyton Manning and others he admired growing up.

“His ability to protect the football and take advantage of opportunities when they are given to him is impeccable. Just studying him, just seeing how calm he is (and) how precise he is, is very impressive,” Winston said.

“That is the reason why every offseason, every rep I get during the season … I’m trying to (get) better and better because I know that he’s still out there playing. He’s still getting better and better,” he added. “Him and Drew Brees, and a couple of the older veterans that are still playing to this day, are just inspirations for young guys like myself and the other guys coming into the league.”

Winston won the Heisman Trophy and a national championship in college at Florida State. He’s also been a big part of Tampa Bay’s re-emergence as a playoff contender since entering the league as the first overall pick in the 2015 draft.

What he’s accomplished in two-plus seasons as a pro — nearly 9,000 yards passing, with 56 touchdowns — not only has Tampa Bay on the rise but has caught the attention of Brady and Patriots coach Bill Belichick.

“He’s a great, young player. I’ve watched him since he’s came in and he’s got them going, so they’re headed in the right direction,” Brady said.

“I know coach talked … about their organization and what they’re trying to do, and Jameis is right at the head of that,” Brady added. “He’s a great leader, has been since he came into the league, and he’s been really productive. So it’s a big challenge for our team: short week, travel, playing a good team.”

The Patriots enter the game searching for those answers defensively. They’ve allowed a league-worst 456.8 yards per game, while also yielding nearly as many points (128) as the defending champs have scored (129).

“Every week we go in seeing what we can take advantage of. But we’ve got to be real with ourselves and know that this is a week-to-week league and know that teams are going to come back with a better plan,” Winston said.

“It’s not like they’re just going to allow people to get yards on them. They’re going to come with a great plan,” he added. “They have a great coach, a great quarterback, a great defense. We’ve got to be ready to play and take advantage of the opportunities when they’re presented.”

Some things to know about the Patriots and Bucs:

BOUNCING BACK: Facing the Patriots after a loss has not been an enviable proposition for opponents during the Belichick and Brady era.

“There’s always urgency here,” Brady said. “No one likes where we’re at.  But we’re the only people who can do something about it.”

WHERE’S THE RUSH?: Tampa Bay has one sack through three games, none the past two weeks. New England, uncharacteristically, has struggled to protect Brady, allowing 13 sacks in four games. Bucs defensive coordinator Mike Smith said while it’s imperative Tampa Bay get pressure on Brady, that alone won’t contain the quarterback, who leads the NFL with 1,299 passing yards and is tied for first with 10 TD passes.

NO EXCUSES: After giving up at least 30 points for the third time this season in last Sunday’s loss to Carolina, the Patriots enter Week 5 ranked 31st in the NFL allowing 32 points per game. They also rank last in two major defensive categories: total defense (456.8 yards per game) and pass defense (324 ypg).

The general consensus in the locker room is that part of the problem has been communication. On more than one occasion against the Panthers, New England’s secondary got its signals crossed and it led to it allowing five pass plays of 24 or more yards.

Defensive captain Dont’a Hightower said while there were plenty of issues to clean up during the short week, “The time is now. There’s no more next week.”