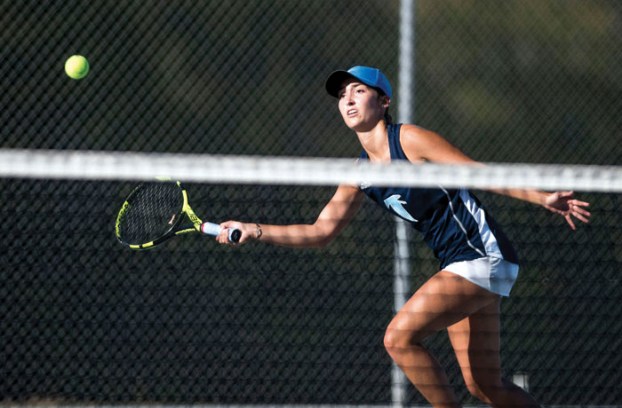 MOUNT ULLA — Senior Day at West Rowan for “Tabby & Abby” was either going to be crappy or happy depending on the outcome of No. 3 doubles.

Everyone got to eat a Falcon blue cupcake with a smile because the sophomore pairing of  Skylar Jahnke and Mira White did what they needed to do. The final Falcons on the court, they rolled, 8-1, and gave West Rowan a 5-4 North Piedmont Conference tennis victory over North Iredell.

White sported odd socks and occasionally sent an odd shot rocketing toward the woods, but she usually found all the right angles. The white-capped Jahnke, who already had taken a grueling No. 4 singles match to give West a chance, was a steady rock and rarely made a mistake.

“They’ve been playing doubles together since they were in middle school, and there’s no way we’d ever break that team up,” winning coach John Brown said. “Neither of those girls has that great foot speed, and that can limit you in singles, but doubles is a different game. They make a very strong doubles team.”

“Tabby & Abby” — that’s Tabitha Landy and Abby Johnson — did their part to make their night a success.

Johnson, who is 5-foot-10, forms an odd-couple No. 2 doubles team with 5-3 dynamo Payton Holt, the county co-player of the year as a sophomore.

Johnson used her height as a wall at the net.

“People ask me why I’m not playing basketball or volleyball or maybe track, but I tried tennis in the seventh grade, and it’s always been a lot of fun,” said Johnson, who plans a career in criminology. “Payton is such an amazing player, so people think it must be intimidating to be her doubles partner, but it’s really not. She’s supportive.”

Holt,  unbeaten in conference singles matches, crushed missiles over, past  — and occasionally through — overmatched doubles opponents. Holt playing No. 2 doubles is sort of unfair. It’s like having LeBron coming off the bench. The Holt/Johnson team is 11-1 this season.

“Doubles is really my forte, and it’s been so much fun playing with Abby,” Holt said. “She’s the nicest person ever, always positive.”

Landy’s strokes aren’t the most polished, but her mobility and tenacity are impressive. She grabbed a vital win for the Falcons at No. 3 singles.

Landy is one of the county’s swiftest athletes. She finished in the top four in the 100 and 200 in last spring’s county track and field championships. Track and tennis is an unusual combination, but she pulls it off.

“My track speed helps and I use it,” said Landy, who plans to become a teacher. “But to have success in tennis, I’ve worked at my skills and my timing to be who I am. We’ve had a lot of athletes in our family, and I’m the last of the Landys. I hope to hit it big as a senior.”

Holt cruised at No. 1 singles, Landy took her match and Jahnke survived 6-4, 1-6, 10-5, in a roller-coaster struggle at No. 4. But fifth-place North Iredell (8-7, 3-7 NPC) was still even after singles. Haley Griffin topped West’s No. 2 player Madison Smith, North Iredell senior Olivia Pettigrew beat West sophomore Keslie Crider at No. 6, and the Raiders’ Macie York outlasted White in the longest singles match at No. 5 — 7-5, 7-5.

Griffin teamed with her sister, Holly, for a one-sided North Iredell win at No. 1 doubles, but Holt and Johnson evened the match at 4-all almost simultaneously. Then everyone turned their attention to Doubles Court No. 3.

When West played North Iredell in Olin, exactly the same scenario had unfolded, with West winning at 1, 3 and 4 singles and 2 doubles for a 4-all deadlock, and then claiming the match by the slimmest of margins with a 9-7 victory by Jahnke and White at No. 3 doubles.

This time Jahnke and White took charge early and gave Brown a chance to relax. They communicated so well they looked like one person playing with four arms and two rackets.

“There were a lot of feelings flying around the last time we played North Iredell,” Jahnke said. “We were the last ones and it wasn’t a match that we wanted to lose.”

What started as Senior Day became Senior Night as darkness arrived, but the third-place Falcons (7-5, 6-4 North Piedmont Conference) didn’t mind. They weren’t thinking about homework. They were thinking about “Tabby & Abby” and winning their last  match.

“I really wanted the girls to get this one,” Brown said with a sigh of relief. “For our seniors and for the team to have a winning season.”