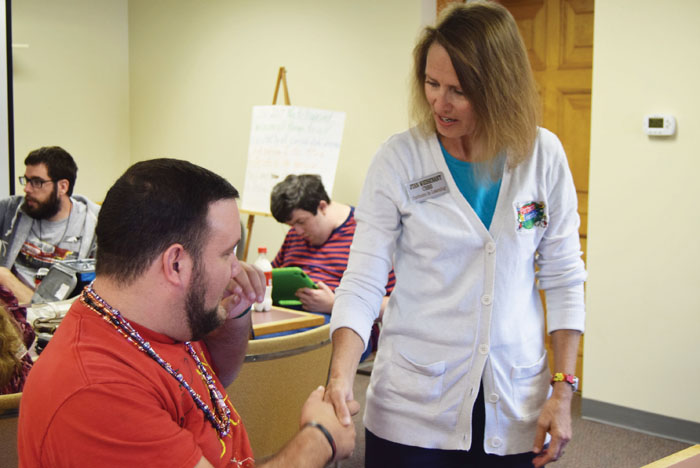 Jtan Whisenant, right, talks to a student in RCCC's S.O.A.R program at First Baptist. Whisenant helps lead the church's Access Ministry, which reaches out to those with special needs. Rebecca Rider/Salisbury Post

SALISBURY — Rowan-Cabarrus Community College’s SOAR program is expanding with a little help from its friends.

SOAR — which stands for Skills, Opportunity, Awareness, Readiness — caters to adults with intellectual disabilities. It has opened a new class on the campus of First Baptist Church in Salisbury.

Jay Taylor, north campus SOAR coordinator, said the program ran out of space on RCCC’s North Campus last year. The program that, when it launched in 2011 served just six students, grew to 60 students in four classes. Originally, Taylor said, he’d hoped to find more space on the North Campus, but with no luck.

“We had all the space that they could afford to give us at that time,” he said.

It was around then that Jtan Whisenant, a member of First Baptist, heard about the problem. Whisenant is also on the leadership team for First Baptist’s Access Ministry, a program that seeks to engage those with special needs in the church and the community.

She brought the issue before the church. For church leaders, the way forward was clear.

When the fall semester started, a small group of SOAR students began meeting in the old YMCA building on North Fulton Street, which is now owned by First Baptist. By January, Taylor hopes to run classes on the same schedule as the North Campus program.

Currently, the First Baptist campus class runs from 9 a.m. to noon Monday through Thursday, instead of to 2 p.m. But that’s the only difference.

“This class replicates exactly what we do on campus,” Taylor said.

Instructor Gwendolyn Boyde said SOAR has partnerships with Morgan Ridge Vineyards, local parks and recreation departments and others. SOAR hopes for students to gain job experience and knowledge beyond classroom subjects like math and reading.

Since opening at the First Baptist location, students have volunteered at the church, helping sharpen pencils and clean up on weekdays.

“We want to be known as a program that gives back to the community,” Taylor said.

Lance said the church is “doing handstands” over hosting the program. Not only is it a way to further be part of the community, but Lance said he sees many in SOAR who also benefit from First Baptist’s Access Ministry.

“It just complements what God is doing at First Baptist with people with special needs,” Lance told the class Tuesday, “because you are valuable to God.”

“I think it’s wonderful,” Whisenant said. “I’m so glad that I go to a church that is so willing to share with the community.”

Taylor anticipates that by January, the satellite class will have nine students and is likely to grow even more. And when it does, First Baptist will be there to help.