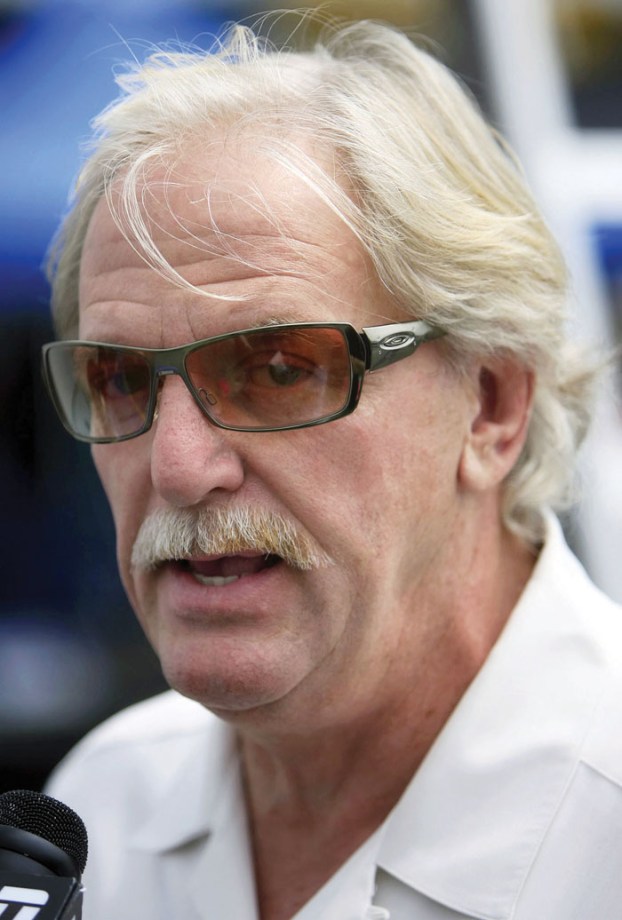 CHARLOTTE (AP) — Robert Yates, a pioneering NASCAR owner and engine builder who with Dale Jarrett won the 1999 Cup title, has died at 74. He was voted into the Hall of Fame in May and will be inducted next year.

“He was a leader and inspired everyone around him to do their best and to take it to a new level,” Doug Yates said in a post by Roush Yates Engines. Roush Yates also posted to its social media accounts that Yates died “surrounded by his family and loved ones.”

“First and foremost an engine guy, Robert will be remembered as a person who helped build the sport with dedication and hard work,” said Edsel B. Ford II, a board member of Ford Motor Co. “His legacy at NASCAR will be defined by his roles as an engine builder, championship team owner, co-founder of Roush Yates Engines and ultimately by the innovation that he brought to all of these endeavors and more.

“Much like my great-grandfather, Henry Ford, Robert was a tinkerer. They both leave behind a legion of admirers and friends who benefited from their mentorship and their passion.”

Tony Stewart, who moved from Stewart-Haas Racing to Ford and Yates engines this season, said the sport “lost one of the most inventive minds and kindest personalities.” The team honored Yates with a throwback paint scheme on Danica Patrick’s car at Darlington.

“I’m glad I got to know him and proud our race team was able to honor him this year at Darlington,” Stewart said. “He leaves a strong legacy that is carried on by his son, Doug, and all of their employees at Roush Yates Engines.”

BUCKLE UP FOR A BUMPY RIDE AT HENDRICK NEXT YEAR

CHARLOTTE (AP) — Hendrick Motorsports will unveil its four Daytona 500 cars later this week in an ceremony at the Charlotte Convention Center. It will be the first appearance for Hendrick’s 2018 driver lineup, which is anchored by unflappable seven-time NASCAR champion Jimmie Johnson.

Alongside Johnson will be:

— Chase Elliott, a 21-year-old still seeking his first victory as Jeff Gordon’s replacement. He coughed away yet another win Sunday when he couldn’t hold off Kyle Busch in the final laps at Dover.

— Alex Bowman, a 23-year-old who efficiently filled in for Dale Earnhardt Jr. last year. Bowman has raced in two NASCAR national events so far this year.

— William Byron, who is making a rapid climb through NASCAR’s ranks. Although he only turns 20 next month, he was rushed from the Trucks Series last year into the Xfinity Series this year and he’ll be in Cup next year for mighty Hendrick Motorsports.

When Earnhardt signed with Hendrick in 2008, it created the closest thing in NASCAR to the 1927 New York Yankees. There had never before been such a collection of star power and talent in one organization.

Now? Well, Hendrick Motorsports has gone from a dream team of millionaires to a team of millennials dreaming of their first win. That was evident Sunday when Johnson was one of the first at Elliott’s window following a humbling defeat. Elliott had the race well in hand until Busch simply chased him down and snatched the win away with just over a lap to go.

“I knew I couldn’t make him feel any better,” Johnson said. “Just trying to be there for him, let him vent, let him get those first few sentences out. I just know from my own experience, it’s just nice to kind of vent and get through that.”

So begins the new role of mentor for Johnson, who will be surrounded by a boy band of sorts when he starts his 17th season at Hendrick next year. When that lineup debuts Thursday night in front of their 2018 Chevrolets, it will be impossible not to look and wonder how in the world Rick Hendrick let this happen? And, when faced with the reality of the situation, why didn’t he bring in free agent Matt Kenseth for at least a year to give Johnson a supporting cast?

This mess began when Jeff Gordon made 2015 his final season. That earned Elliott a quick promotion to the Cup Series. Then a concussion sidelined Earnhardt for half of last year and led him to make this his last season. Enter Bowman, who despite having zero credentials to drive the No. 88, did well enough filling in for Earnhardt to earn the job next year.

And when Kasey Kahne’s time ran out with the team — and that was long before his July victory at Indianapolis — it was Byron who got called up to the big leagues. Consider: If Johnson wins his record eighth title this year, Byron won’t be old enough to legally attend the championship party. Bummer, too, since Snoop Dogg played last year’s party.

Should this all work out, and Hendrick actually has a trio of future Hall of Famers in his stable, then good for him for finding a miracle fix. But there’s no way this changing of the guard won’t come with serious growing pains for the organization. Elliott has proven that raw talent and fast race cars can make you a contender, but it takes racing smarts and experience to make it to victory lane.

He’s fallen short at least five times and on Sunday, it was Busch who knew how to pick his way through traffic and catch Elliott, who offered no defense.

Busch was empathetic and knew Elliott had limited options, but still came up with at least one potential strategy.

“The only thing Chase could have done differently was just moved around and tried to get out of the wake of the cars that were in front of him,” Busch said. “I was actually surprised he didn’t. He kept running the bottom behind those guys, and the bottom was what got him there for that point in the day.

“He could have just tried to blitz them on the top and get around them sooner, but other than that, I think he was just so focused on what he had all day long, making the bottom work, that he just stuck with it.”

Those are the kind of lessons that will be learned on the fly next year at Hendrick, with Johnson leading the class each weekend. He’s also going to have his hands full in that the other three drivers simply don’t have the car experience that is needed to guide significant growth and improvement in speed, setups and strategy.

It will come, and if the organization can maintain its spot as the top Chevrolet team, well, hat’s off to Mr. H.

TAMPA, Fla. (AP) — Jameis Winston is excited about the next challenge in the maturation of the young Tampa Bay... read more