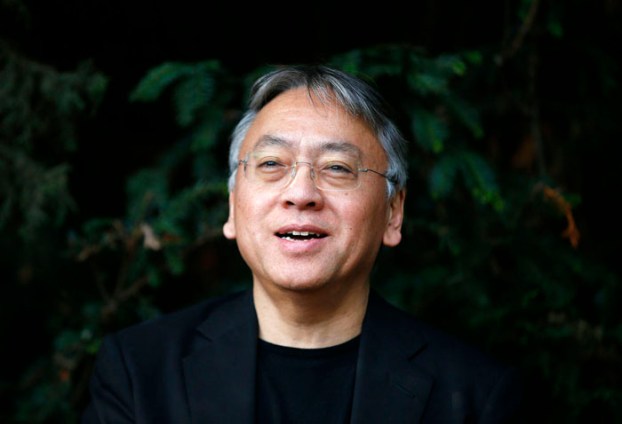 British novelist Kazuo Ishiguro speaks during a press conference at his home in London, Thursday Oct. 5, 2017. Ishiguro, best known for "The Remains of the Day," won the Nobel Literature Prize on Thursday, marking a return to traditional literature following two years of unconventional choices by the Swedish Academy for the 9-million-kronor ($1.1 million) prize. (AP Photo/Alastair Grant)

The British novelist, born in Japan, is best known for his novel “The Remains of the Day” (1989 ). The judges praised Ishiguro as a writer “who, in novels of great emotional force, has uncovered the abyss beneath our illusory sense of connection with the world.”

Permanent secretary of the academy Sara Danius said immediately after the announcement, “If you mix Jane Austen and Kafka, you have Ishiguro – but you have to add a little bit of Marcel Proust into the mix, and then you stir, but not too much, and then you have his writings. He’s developed an aesthetic universe all his own. He is exploring what you have to forget in order to survive in the first place as an individual or as a society.”

Ishiguro’s win marks the Nobel’s return to a more traditional literary author. Last year, the prize was awarded to American musician Bob Dylan, a surprising decision that sparked criticism from some quarters. In 2015, the Belarusian investigative journalist Svetlana Alexievich won the prize. Ishiguro, on the other hand, is a much admired fiction writer who sits comfortably alongside such previous winners as Toni Morrison and Alice Munro.

Ishiguro was born in Nagasaki in 1954. His family moved to England in 1960 for his father’s work as an oceanographer. He earned a Master’s degree in 1980 and became a British citizen in 1982, the year he published his first novel, “A Pale View of Hills,” which is set in Nagasaki after the atomic bombing.

Ishiguro has been a finalist for the Man Booker Prize four times. He won the Booker in 1989 for “The Remains of the Day,” which in 1993 was adapted into a movie starring Anthony Hopkins and Emma Thompson.

His work is marked by a sense of painful loneliness. Joyce Carol Oates has called Ishiguro “one of our most eloquent poets of loss.” Reviewing his most recent novel, “The Buried Giant,” former Washington Post Book World editor Marie Arana wrote, “His sensibility is neither Japanese nor English; it stands apart from any one culture. If these books have anything in common, it is that an unspoken secret is entombed at each core – an elusive truth that is inferred, but that no one quite understands or can fully articulate.”

In 2005, Washington Post book critic Jonathan Yardley called “Never Let Me Go” “the best Ishiguro has written since the sublime ‘The Remains of the Day.’ It is almost literally a novel about humanity: what constitutes it, what it means, how it can be honored or denied.”

Although Ishiguro has long been a British citizen, reaction in his native Japan has been celebratory. NHK, a Japanese public broadcaster, interrupted its regular show to announce the news of his Nobel win.

Salman Rushdie, a contender himself for the Nobel Prize, issued a statement saying, “Many congratulations to my old friend Ish, whose work I’ve loved and admired ever since I first read ‘A Pale View of Hills.’ And he plays the guitar and writes songs too! Roll over Bob Dylan.”

Sonny Mehta, Ishiguro’s editor at Knopf, said, “I’ve always thought that Ish is an amazing writer. The breadth of his work as a novelist is astonishing. We’ve had the good fortune of being his publisher since ‘The Remains of the Day,’ a book that readers around the world have come to cherish. This acknowledgment from the Swedish academy is the most wonderful news.”

Ishiguro remains very much a citizen of the world, conscious of the way people suffer alienation everywhere. “I love living in London,” he recently told the Guardian, “but if I had to write a ‘London novel’, I’d portray the capital as a vampire sucking the blood out of the rest of the country. I’m amazed people in Britain accept so quietly this lack of regional balance.”

Ishiguro is married to Lorna MacDougall, from Scotland. They have one daughter.

Awarded since 1901, the Nobel Prize in literature is now worth about $1 million. According to the terms set down by founder Alfred Nobel, the prize recognizes a writer who has “produced in the field of literature the most outstanding work in an ideal direction.”

Odds makers were favoring Kenyan writer Ngugi Wa Thiong’o or Canadian writer Margaret Atwood to take this year’s literature prize. In Japan, hopes were running high for perennial Nobel contender Haruki Murakami. There were reports that a major bookstore in Tokyo had shelves dedicated to Murakami in anticipation of Thursday’s announcement. When the news came, the top shelf was quickly replaced with books by Ishiguro.

All the Nobel Prize winners so far this year have been men. Friday the winner of the peace prize will be revealed.

A fiesta for your tastebuds: Wednesday is National Taco Day