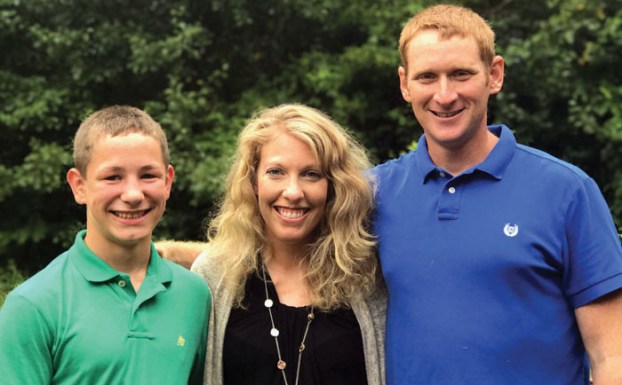 Stephanie and Jon Lippard were hosts this summer for Misha, left, a 15-year-old boy from Eastern Europe. The Lippards are hopeful they can adopt Misha, who will turn 16 in early November. Submitted photo

SALISBURY — By early next year, Stephanie and Jon Lippard hope they have made all the trips, paid the considerable expenses and completed the paperwork necessary to make Misha a member of their family.

Misha, a 15-year-old boy from an Eastern European country — the Lippards asked that the specific country not be identified for protection and privacy reasons — has lived in an orphanage since he was 2.

After hosting him this summer as part of Christian-based Open Hearts and Homes for Children, the Lippards asked Misha if they could try to adopt him. The date they asked him to be their son, Stephanie said, was July 25.

Misha wanted to talk it over with his older siblings first. He’s the youngest of six children who spent much of their childhood in the orphanage. Misha received their blessing and agreed to the Lippards’ attempted adoption.

“We just felt like God was calling us to adopt him,” Stephanie Lippard said, describing how she and Jon prayed over their decision. “God opened our hearts.”

But many things must happen first, not to mention the estimated $26,000 to $30,000 cost to see the adoption through. That probably will include the Lippards’ making two to three trips to Misha’s home country, fees to the adoption agency, immigration papers and other documentation fees.

To help pay some of their costs, the Lippards have been conducting fundraisers, including a big one planned from 5 to 7:30 p.m. Saturday at World Hope Worship Center, 2203 Mooresville Road.

The fundraiser will include Christian music; a barbecue sandwich, chips and a drink for $5; raffle ticket sales for a top gun prize, the drawing for which will be held Dec. 1; and a silent auction of 25 different baskets and six Carolina Panthers tickets for the Christmas Eve game against the Tampa Bay Buccaneers.

The gun being raffled off Dec. 1 is a newly released Glock 19 Gen 5. Second prize is $100 worth of ammunition from Lead Chunkers in Rockwell.

Stephanie Lippard said her family already has raised close to $10,000 from efforts such as a yard sale (with hot dogs) that raised $5,300 and a GoFundMe page that has roughly $1,200 in contributions.

The GoFundMe site is https://www.gofundme.com/adopting-our-oldest-boy.

In December, a planned fundraiser will provide for visits with the Grinch, along with cookies and hot chocolate.

Misha stayed more than 40 days with the Lippards this summer, from June 28 to Aug. 7, before he headed back to his home country.

“I had the hardest time,” Stephanie said about watching him leave. “We just grew so attached, so close. I felt like, honestly, I gave birth and sent my child on a plane.”

Misha has been able to message the Lippard family almost daily through his country’s version of Facebook. He already is calling the Lippards mom and dad.

The Lippards have three children: Isaac, 10; Tyler, 9; and Hannah, 5. A fourth child was stillborn in 2011. Stephanie home-schools her three children and hopes she can do the same for Misha.

Misha knows basic English. “He’s definitely an extrovert who is used to being around other kids,” Stephanie said. “… He fits in really well.”

When children become 16, they age out of the orphanage Misha has been calling home. He turns 16 Nov. 4.

Open Hearts and Homes for Children was founded in 2010 and is based in Clarks Summit, Pennsylvania. It was founded by three couples with a shared passion for orphan care, and it concentrates on the plight of orphaned children in Eastern Europe.

Today, it operates in 24 states.

“An international hosting program,” the nonprofit group’s website says, “OHHC provides orphan children with the opportunity to experience life outside of the institutional setting and develop long-term, loving relationships with host families in America.”

The program concentrates on two countries and matches children ages 7 to 16 with host families, such as the Lippards were this summer, in the eastern United States.

Open Hearts and Homes for Children also will assist families who decide to adopt in obtaining background checks and necessary approvals, along with some training.

It also coordinates travel back and forth to the Eastern European country and has coordinators in Eastern Europe who work with orphanage directors and local orphan courts.

“The program’s goal,” the website says, “is to give orphaned children a chance for a more hopeful future by connecting them with families who will not only love and cherish them during their stay but also care about them after their visit is over.”

Laughter Yoga: It really is funny

SALISBURY — Joan Palmer directed the people in the semicircle with her to raise their arms and breathe in deeply.... read more

High school football: Hornets pour it on in second half to claim state championship game