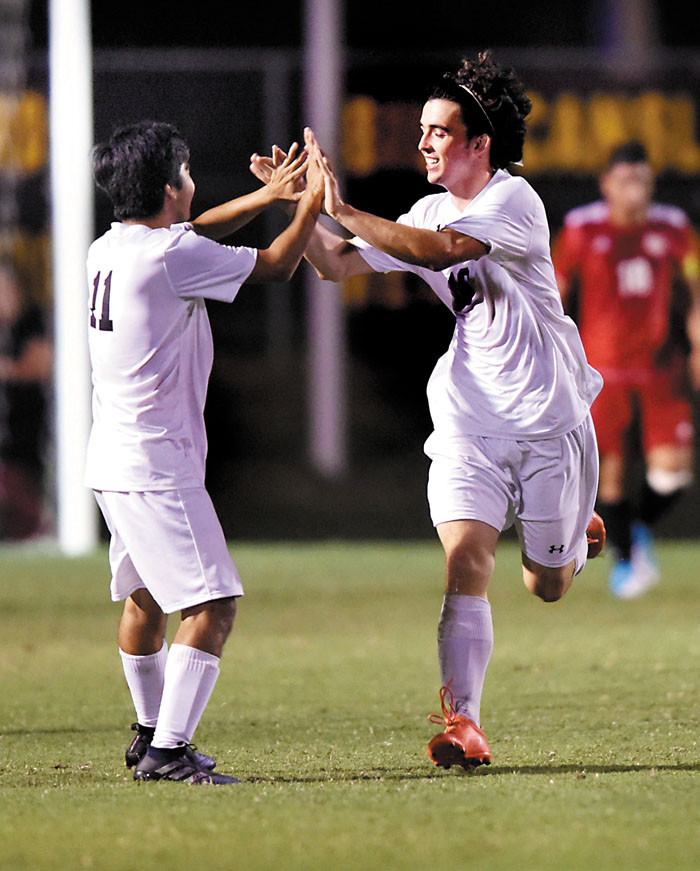 SALISBURY — The prudent thing might have been to just sit back and play defense, but this has been an aggressive  Salisbury soccer team the last three weeks.

“We kept going forward, always pushing forward right to the very end,” Salisbury coach Matt Parrish said. “And what a way to finish. I know I can be a little nit-picky, even in the best of times, but that was a true exclamation point if there’s ever been one.”

Tony Figueroa punched in a goal with one second left on the scoreboard at Ludwig Stadium to cap a physical, 4-2 victory on Wednesday against Lexington , one of the four Central Carolina Conference teams that knocked off the Hornets (8-5-2, 7-4-1 CCC) early in the season. But the Hornets’ most recent loss came on Sept. 7.  State champs in 2011, 2013 and 2015 under Parrish, the Hornets are now  7-0-1 in their last eight CCC encounters.

“That 0-4 start in the league was no fun for any of us,” Parrish said. “I’ve got some of our soccer seniors (Melvin Bonilla and Pedro Cruz) in class, and we didn’t even want to talk about it. They were upset and they could tell how upset I was. But those kids  made a decision that this senior class was not going to be the one that let Salisbury soccer falter, and now here we are. Yes, I wish we’d awakened a lot earlier. There are games that we would love to have back. But all we can do now is look forward.”

“Defend The Tradition” was printed on the back of Parrish’s white T-shirt — and the Hornets did.

Figueroa and Luke Holland took care of the scoring with two goals each, but Jack Fisher was instrumental in three goals. Defensive demon Pedro Cruz stopped a half-dozen Lexington assaults, and keeper Josh Faulkner, diving, sprawling and leaping, handled balls that got past Cruz.

“When the season started, we had two goalkeepers (Fisher and Faulkner) that I thought were as good as any in the county or the conference,” Parrish said. “I was worried because we could only one play one or the other, and I thought we might have controversy. To my surprise, both of them volunteered to play in the field. We put Jack out there, and I believe he’s been our MVP with his stellar defense, his long throws and his accurate kicks. A very high percentage of our goals have come through Jack.”

Lexington (12-5, 8-4) grabbed a 1-0 lead when striker Amiel Cervantes beat the Hornets on the left side nine minutes into the match and angled a shot to the far post for his 19th goal of the season.

The Hornets had  far more opportunities than the Yellow Jackets the rest of the first half, but no finishes, and Lexington, which had won the first meeting, 1-0, hugged that one-goal lead right into the break.

Seven minutes into the second half, the game turned, when a Lexington foul presented Figueroa with a free kick just outside the box.  He smoothly converted for the 1-all tie.

“I had good touch on that shot,” Figueroa said. “Hit it just the way I wanted to.”

Just two minutes later, the Hornets had the lead. The go-ahead goal came on a set piece, with Fisher launching a kick that Bryan Cortez Garcia centered for an airborne Luke Holland, who completed a stunning play with an accurate header.

“That was mostly Jack, just a perfect kick,” Holland said. “Coach had fired us up at halftime, and I drove hard to make that finish.”

With 15:38 remaining, Holland headed in another precise set-up by Fisher, and the Hornets were in control, 3-1.

“When it’s two evenly matched teams, it usually comes down to the set pieces,” Parrish said.  “We practice that same play that gave us two goals a lot, but it never works quite as well as it did tonight.”

There was still drama ahead, as the Hornets were whistled for a handball in the box with 9:18 left, a call Parrish didn’t agree with. Liam Blackerby converted the PK, and the Hornets, who had appeared in total  command, suddenly led by only a goal.

“We kept our heads up,” Figueroa said.

Lexington had a few shots down the stretch, one sailing just over the bar, but Salisbury’s defense and Faulkner turned the Yellow Jackets back.

When Lexington was whistled for a desperation foul with 25 seconds left, Salisbury was going to be able to exhaust the remaining time, but the Hornets still attacked. Fisher chipped the ball to the doorstep, and Figueroa took it home. Then he sprinted deliriously for the home sideline, arms waving with unbridled joy.

“I really wanted to finish those guys off,” Figueroa said cheerfully. “I was a little excited.”

Some of the Hornets were in the ranks of the walking wounded when a fiercely fought match ended.  Daniel Tinajero battled cramps. Hugo Trujillo exited on crutches.

Holland, after receiving medical attention, hopped on one leg to join his teammates for the midfield victory celebration.

“A little bit of a leg issue, but this one meant a lot to us,” Holland said. “This was a big-time win.”