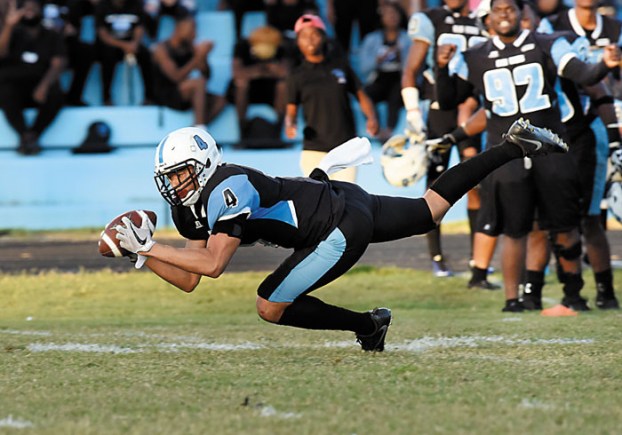 Lavern Eggerson resides in Memphis, Tenn., and doesn’t make the long trip to Salisbury that often. But after vacationing last week at Myrtle Beach, she spent the weekend with her son before returning home yesterday.

“I got coached after the game,” said Williams, with a smile. “She’s seen a lot of football and knows the game. She said we need to block and tackle better, and I said, ‘that’s what I’ve been trying to get across to the team.'”

Williams is in his fifth season at Livingstone and his mother has yet to see her son coach the Blue Bears to a victory in person. In reality, a win last week was tall order, as the undefeated Trojans were just too strong.

“Their first touchdown was on a blown coverage and then we dropped a TD pass, which was big, because that would have made it 7-7,” recalled Williams. “You never know what happens after that.”

What happened was an onslaught which included an 85-yard kickoff return for a touchdown, after the Blue Bears had pulled to within 24-6. It was 38-6 by halftime.

This week, the Blue Bears’ schedule gets a little kinder, as the CIAA Southern Division games begin. Livingstone travels to Raleigh for a 1 p.m. date at St. Augustine’s.

“I like our chances this week,” said Williams. “We’ve had five games to find out who we are. Tackling better is my main concern and on offense, sustaining drives is the key.

“We’re looking forward to a division game,” continued Williams. “All the guys are upbeat. We’ve still got to get some guys healthy, but we’ll be ready and up for the challenge.”

Livingstone quarterback Xavier Longerbeam didn’t start last Saturday because a shoulder injury had kept him out of practice.

Newcomer Trey Willis started but Longerbeam came off the bench against Virginia State to post some good numbers — 19-for-31 passing for 197 yards and two touchdowns. He also ran for a 20-yard TD.

Williams said that he’ll continue to play Longerbeam, Willis and even backup Thaddeus Bell, depending on the situation.

“It’s a good combination, having two to three guys there,” added Williams. “Longerbeam, the more reps he gets, the better he’s gonna be. But Willis brings a lot to the table as well and I like having Bell in the ‘bullpen.'”

For 0-5 Livingstone, the opponent is not Williams’ main concern.

“I’m more interested in our team at this point,” he said. “We’ve got to keep improving. We got the penalties down (only four) last week, but we need to tackle better, block better and basically, just do our jobs.

“If you have 60 to 70 guys on a football team and everybody gets one ‘that’s my bad,’ … then you’re going to be down 28-0 by halftime,” Williams continued. “You just can’t make mistakes, especially at crucial times … we all just have to do our jobs. We’re playing for something now — not that we weren’t before, but now, they are division games.”

Yankees top Twins to move into ALDS against Tribe