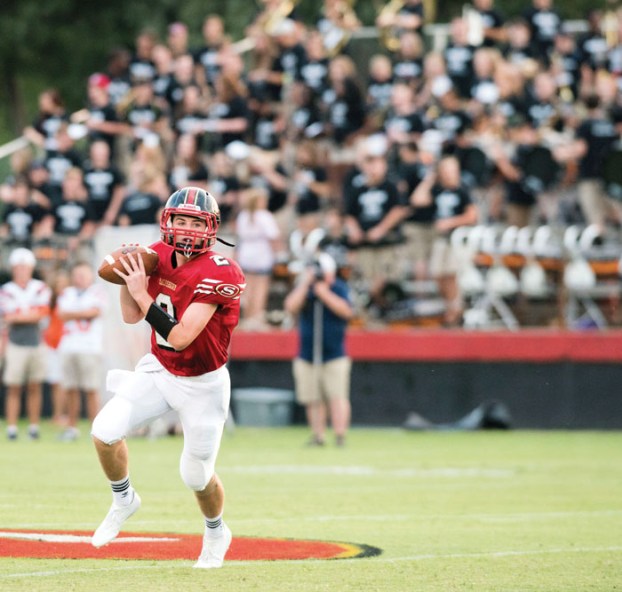 JON C. LAKEY / SALISBURY POST Salisbury quarterback Griffin Myers (2), shown during a victory over Carson on Aug. 25. Myers is The Post’s Friday Night Hero after he set a school record by passing for 280 yards last week against Central Davidson. SALISBURY — Salisbury High has produced more than its share of great football teams, but they’ve been squads that ran over or around people.

So what’s happening at Ludwig Stadium this season in the passing game amounts to an aerial circus. Salisbury’s senior quarterback Griffin Myers averages only 14 passes per game, but the Hornets have been so efficient and so explosive through the air that Myers is breaking school records and raking in accolades such as the NCHSAA’s male athlete of the week for the entire state.

After six games, Myers has thrown 15 touchdown passes— with no interceptions.

“I’ve got no clue how this happened,” said Myers, who had a career-best four touchdown passes on Friday. “It’s been going really well, but I’m probably as surprised as anyone.”

Myers’ 280 passing yards against Central Davidson in Friday’s 58-0 romp set a single-game record for the Hornets (5-1, 4-0 Central Carolina Conference), breaking a mark that had stood since 1991. Myers has completed 62 percent of his passes for 1,070 yards. That yardage may not sound earth-shaking by today’s throw-it-around standards, but at Salisbury this is pretty crazy stuff.

“I never thought about breaking any records,” Myers said. “I had no idea I’d done anything unusual on Friday night. I didn’t find out until Saturday morning.”

The school record for the Hornets for passing yards in an entire season is 1,185 yards. That record was set in 1998 by Michael Blount. Glen Padgett was the Hornets’ head coach that season, a brief stop before he moved on to great success at Northwest Cabarrus, North Meck, and then Concord. That 1998 Salisbury team went 1-10, they were usually behind, and their best chance to move the ball was to throw. Blount let if fly 35 times against Albemarle and 36 times against Davie County. Those 1,185 passing yards came with a high cost —  flurries of sacks, a 36-percent completion rate, three touchdowns and 23 interceptions.

While Blount’s single-season total ranks first at Salisbury, it ranks 57th on the all-time Rowan County list. In 2010, John Knox, now a Salisbury assistant coach, threw for 1,184 yards, 1 yard less than Blount. That was a year when the Hornets played 16 games and won the 2AA state championship. Knox was a fine runner and is the Salisbury record-holder for total offense (5,496 yards, eighth in county history). Knox also holds the school record for career passing yards, with his 3,200 yards dispersed over four varsity seasons.

Assuming Myers stays healthy, Salisbury, which is idle this Friday, will have a new single-season record-holder very soon.

Until a few weeks ago, Myers was known as a baseball player. He was one of the best in the Central Carolina Conference last spring as a pitcher/shortstop. Then he spent the summer months playing for the always successful Rowan County American Legion team. Rowan County competed until late July.

Myers’ junior season as a part-time starter for a 3-8 team had been a struggle — 485 passing yards, four TDs and nine interceptions — but Hinson offered a clean slate and a fresh start. Confidence is a big part of high school football, and there was never any question, even in the preseason, that Myers would be the No. 1 quarterback.

“The guy Griffin reminded me of was Jamey Blalock (Hinson’s QB when East Rowan went 9-4 in 2009),” Hinson said. “Griffin understood the offense we would be running and I knew he could make good decisions on the option for us. He also threw the ball better than I’d heard, a lot better than I expected.”

“I made it to all the workouts for football, and then I’d go to baseball,” Myers said. “When it was time for the scrimmages, Coach helped me out with the scheduling, and I was surprised by how well we did in those scrimmages. I could see we were going to have a good team. I think my work ethic has been good. I’ve put the time in. I’ve worked at football this year the same way I work at baseball.”

After an opening loss to North Rowan, Salisbury has been stout. The Hornets aren’t ranked in 2A, but they have scored the most points of anyone in the county while allowing the fewest.  They have won five straight, the longest streak at the school since the 2012 Hornets won 10 in a row to reach the Western final.

“When Griffin has had a game that wasn’t great (Thomasville was probably the shakiest), he’s always come right back with a big night,” Hinson said. “He’s been good managing games, minimizing mistakes, not turning the ball over. We’ve got the kind of athletes that can make that 5-yard route an 80-yard touchdown with their speed, and he understands that. He’s been good at getting the ball to our playmakers in space.”

Salisbury has two of the quicker sprinters in the county in Tyrone Johnson and Trell Baker. They’ve combined for nine receiving touchdowns.

Salisbury also has rushed for nearly 1,000 yards, with freshman Mike McLean and junior Raheim Walker providing the leg-work. Myers has sprayed the ball around to a variety of receivers, with Joe Steinman and Will Taylor contributing two TD catches apiece, and Cameron Gill and Adam Drye adding one each.

“First of all, you have to credit our offensive line because it’s really improved from last year,” Myers said. “And you have to credit the coaching staff for a lot of well-designed plays that are getting guys open. I’ve been throwing the ball to open receivers. There’s also been a little bit of luck involved.”

Myers admits he’s made a few throws that could’ve been intercepted, but they trickled off fingers or caromed off shoulder pads and hit the ground.

Even with everything going right, it’s not hard for Myers to stay humble. His older brother, Riley, who quarterbacked the Hornets through leaner times in 2013-14, pushes him to do better, and Griffin also remembers how tough things were just a year ago.  He had seven interceptions at this point in the 2016 season.

The Hornets have a key road win at Lexington in the bank, but three of the CCC’s best teams are coming up. Salisbury is at Ledford on Oct. 13, hosts East Davidson on Oct. 20, and then heads to North Davidson on Oct. 27.

Whatever happens, whatever direction this comeback season takes down the stretch, the Hornets know they’ll get Myers’ best when they play against the best.

“He’s a great competitor,” Hinson said. “We’ve put a lot on him, but he’s done everything we’ve asked.”

By David Shaw sports@salisburypost.com SALISBURY — East Rowan may not have the most expressive golfers on its girls team this... read more