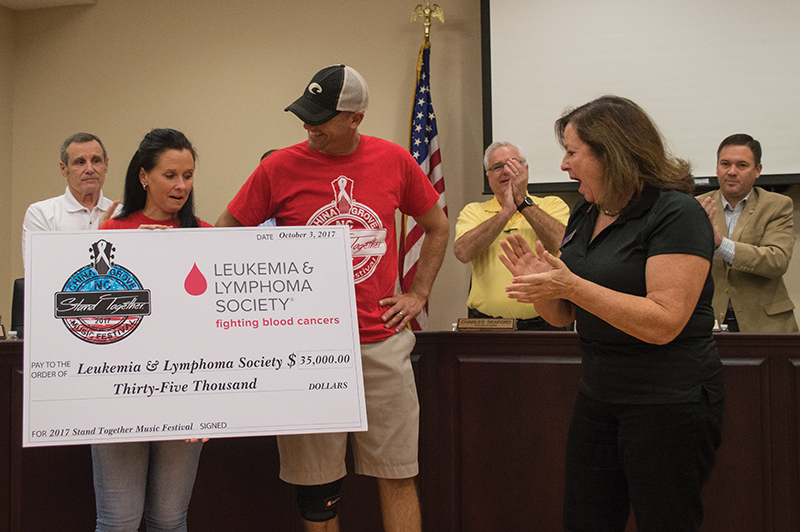 Josh Bergeron / Salisbury Post - Karen and Darrell Harwood present a check to the Leukemia and Lymphoma Society for $35,000 during Tuesday's China Grove Town Council meeting. The money was raised through the Stand Together Music Festival in downtown China Grove.

The pair presented a check for $35,000 to the Leukemia and Lymphoma Society during Tuesday’s China Grove Town Council meeting. A crowd of friends and family packed the council chambers for the presentation.

“That was just killer. It was a number I didn’t think we would reach,” said Harwood, a China Grove native, when asked about the $35,000.

LLS Donor Development Manager Cathy Bloomberg said the $35,000 would be enough to give 70 patients $500 for co-pay assistance. The money will help patients not worry about paying for food or not being able to take medication, Bloomberg said.

“I just want to thank China Grove for closing down their streets and opening up their hearts for LLS patients,” Bloomberg said. “This is an incredible amount of money that will help a lot of people. We are very excited about all the cures people are talking about and all the advances, but it all starts with this sort of grassroots approach.”

The music festival involved nine months of planning, Harwood said. On Sept. 23, several bands and vendors converged on downtown China Grove for a festival that packed the streets. All profits from the festival went to the Leukemia and Lymphoma Society.

Harwood said the festival raised roughly $15,000 through sponsorships and about $20,000 on the day of the festival.

Bloomberg said the amount of money raised is “unbelievable” and “way more than just good.”

Asked about the number of people who attended, Harwood said, “It’s good to have that much support in your hometown.”

The Harwoods and friends and family organized the music festival in part because of the extent to which their family has been affected by cancer. Darrell Harwood was diagnosed with melanoma in 2012. The cancerous spot — on his left leg — was removed. His father, mother-in-law and brother-in-law have also been diagnosed with cancer.

Immediately after the check presentation, Harwood said he plans to organize another music festival in 2018 with an even higher fundraising goal of $50,000. This year’s goal was $30,000. He said this year’s festival required a lot of work, but it was worth the effort.