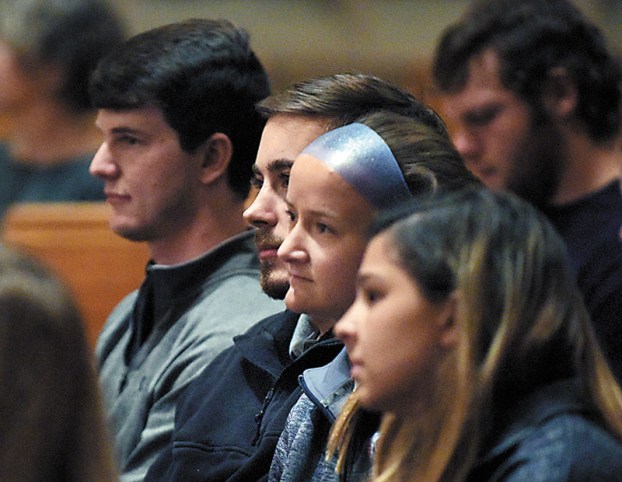 Becky Frost, in the center, at the emotional weekly Catawba chapel service. Becky's sister was injuried in the Las Vegas shootings. Beside Becky are Steven Yetton on one side and friend Skyler Hathaway on the other. Wayne Hinshaw, for the Salisbury Post SALISBURY — News of a horrific mass shooting in Las Vegas began to trickle onto the Catawba College campus early Monday morning. A single gunman rained bullets on a crowd of 22,000 country music listeners, killing 59 and wounding more than 500.

It was a terrible story — one that touched the hearts of the caring student body the school is known for. But it was distant, slightly removed from students’ reality until Catawba senior and Maryland native Becky Frost got a phone call.

“Don’t panic,” her mother told her. “We don’t know anything yet — but turn on the news.”

With a newscaster chattering in the background, Becky learned the terrible truth: her older sister, Tina, had been at the Las Vegas concert. And Tina had been shot.

Much of what happened that night is still a mystery to the Frost family. Becky said she knew Tina, who lives in San Diego, was in Las Vegas. The 27-year-old had sent Snapchat messages from the city.

“I was so jealous,” Becky remembered.

But the family didn’t know Tina and boyfriend Austin were planning to attend the country music concert, or what took them to Las Vegas in the first place. It was Austin who gave the family a few details: That the couple had been there, and that Tina had been struck by a bullet on the right side of her head.

For a long time, that was all the Frosts knew. Tina was bundled into an ambulance and taken away. Austin was not allowed to ride with her and didn’t know which hospital she was taken to. When he finally managed to track her down, Tina was in surgery.

“It was surreal,” Becky said.

The past few days have been touch and go. The bullet lodged in Tina’s right eye and may have caused damage to her frontal lobe, and she has swelling in the brain. Tina is in a coma and is in critical but stable condition.

The Frost family is making it through, hour by hour, day by day. Becky says family members rely on each other, calling and texting one another constantly. The rest of Becky’s family is in Las Vegas with Austin, waiting to see how things turn out. Becky said the reality of the situation won’t sink in until she’s able to see the damage for herself.

Until then, she’s surrounded by her Catawba family. Fellow students wrapped an arm around Becky on Tuesday night at a campus worship service, stopping to hug her or place a hand on her arm or shoulder.

The Rev. Dr. Kenneth Clapp, senior vice president and college chaplain, said the service served to bring comfort, strength and hope to the student body. While campus worship services are held every Tuesday night, this week’s service was dedicated to helping students work through the Las Vegas tragedy and several recent losses on campus.

The service was “a place where we can feel God’s love and embrace one another in the spirit of God’s love,” Clapp told students Tuesday night in the darkened campus chapel.

“Help us in the darkness of this night when we are surrounded by doubts and fears and loss,” Clapp prayed. “… Grant us the grace to speak hope in the midst of despair. Grant us the courage to return love for hatred.”

In an interview after the service, Clapp said Catawba students have been struggling in the aftermath of the massacre. In his freshman-year seminar course, students told Clapp that they no longer feel safe going out to public gatherings — that things that once brought joy and excitement are now tinged with fear.

It was a feeling that Clapp said he remembers from years ago, just after Sept. 11, 2001.

“This is their 9/11,” Clapp said of the Las Vegas shooting. “This has ripped away their innocence.”

But students across campus are pulling together and supporting one another.

“I am always moved by the caring and support exhibited by members of the Catawba College community,” Catawba President Brien Lewis said in an email. “In these difficult times, I am deeply appreciative of the depth of that spirit demonstrated by our students, faculty and staff.”

Tuesday’s service ended in a “friendship circle,” with students holding hands during a benediction and then closing out the night with hugs and words of support and comfort.

Becky will be flying out to be with her family and her sister on Sunday. In many ways, she said, the family is lucky. Tina is not relying as much on a ventilator, and though she’s in a coma, she shows signs of response to stimuli and people talking to her.

A GoFund Me account to help cover the cost of her medical bills, missed work for the family and the plastic surgery she’ll need in the future has raised more than $160,000. The original goal was $10,000, and then $50,000.

“Today, we saw a couple of good things,” said an update from Tina’s mother, Mary Watson Moreland, posted Wednesday morning. “Her CAT scan showed no increase of swelling in her brain from yesterday and her low-grade fever subsided; she has maintained a healthy temperature and vitals all day and they have started her on a feeding tube.”

Her condition could fluctuate — a common occurrence for coma and brain injury patients — but most of all, she’s still alive.

“She has a chance,” Becky said, “A lot of people didn’t get that chance.”

Those interested in donating to the Frost family can do so at https://www.gofundme.com/mary-watson-moreland.

Laughter Yoga: It really is funny

SALISBURY — Joan Palmer directed the people in the semicircle with her to raise their arms and breathe in deeply.... read more