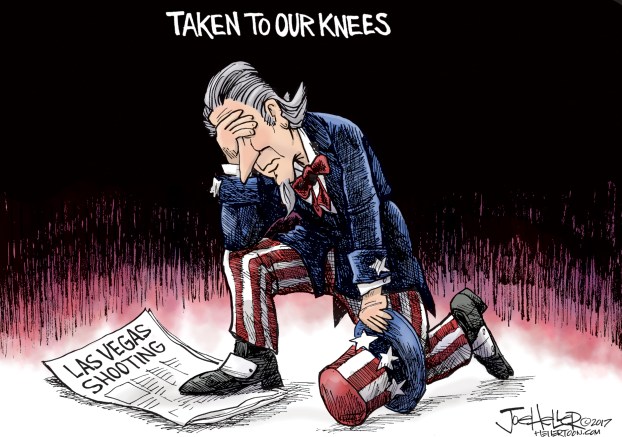 Responding to the recent Las Vegas concert shooting that killed more than 50 people and injured hundreds more, President Trump described the act as one “of pure evil.”

As the Supreme Court wrestled with a 1964 obscenity case, Justice Potter Stewart struggled to define obscenity, and finally settled on his oft-quoted statement, “I know it when I see it.” That seems to be the preferred attitude about evil today. We certainly know it when we see it.

On a visit to Las Vegas, I was handed a flyer advertising prostitutes. All I had to do, the flyer said, was call a number. A vehicle would even transport me to the rendezvous point, presumably for an extra charge. Is this objectively evil? Who gets to decide?

On the nightly news and in nearly every Hollywood film, there are graphic scenes showing spattered blood and bodies strewn about. Big-city news broadcasts often lead with the latest shootings and body count. Do such things desensitize us to the value of human life? Where does that value come from?

We’ve come a long way from Hollywood’s “Golden Age” and from TV’s “Leave it to Beaver” and “Uncle Miltie.” Has this been progress, or regress? Does that regression promote evil, or is much of modern entertainment evil in and of itself? If you are having difficulty deciding, you may have fallen victim to the zeitgeist, “the spirit of the age.”

Stephen Paddock, 64, of Mesquite, Nevada, identified by police as the Las Vegas shooter, did not look evil. Except for one citation by law enforcement, he was leading a normal life. He had no criminal record. His brother and mother said they were shocked and don’t know what got into him.

Theology and mythology speak of a demonic world beyond our vision and understanding. Cold-blooded killers have been interviewed by psychologists and writers like Truman Capote to determine why they committed their evil acts. Some of these killers came from poverty, but the majority of poor people don’t kill. Some of these killers came from abusive homes, but most abused children don’t grow up to become mass murderers.

There will be the predictable calls for “gun control.” There is no law, however, that can prevent someone from committing evil acts. Wouldn’t we have passed it by now?

Evil co-exists with the good. Each individual must choose which one to embrace or push away. For some, embracing good comes naturally. For others, the pushing away of evil is a lifetime struggle. Perhaps Stephen Paddock embraced evil just this once, or maybe it was waiting to ambush him just as surely as he ambushed those innocent people 32 floors below his hotel window.

Would someone tell Hillary Clinton the presidential race is over and she did not win? — Linda Connelly China Grove read more