A good time to talk about guns? 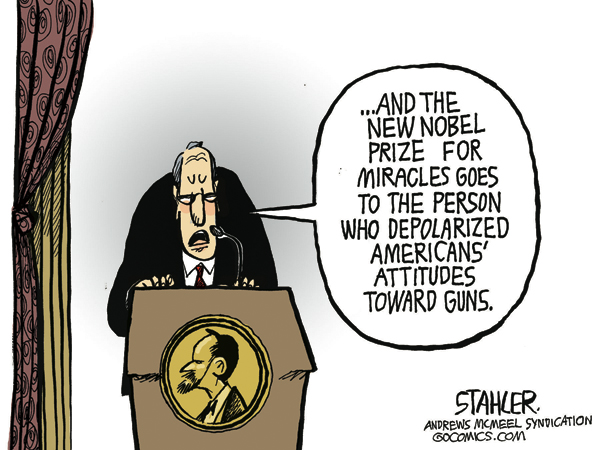 “We’ll be talking about gun laws as time goes by.” — Donald Trump

As time goes by.

There will be time, of course, to have this discussion. “Not now” is not the same as never.

It must be on a day when there has been no recent gun violence. So not today, and not tomorrow, and not the day after that. But someday. There is not a horrible Catch-22, where because there are not sensible gun laws, it is always too soon after a major gun tragedy to talk about sensible gun laws. No.

There is a perfect moment that exists for such a conversation, just after the moment of silence and just before life resumes. If you slice time thinly enough you will find it, like plucking an atom of gold from the air. It lasts only a millisecond, but it is the right time, and words spoken then will not fall on deaf ears. (The discussion must be brief. Just a second too late and it will be the wrong time again.) But it is possible.

When the time arrives, we must come to the issue without politics. (Politics have seeped into our chicken and our Pepsi, and our late-night talk show hosts give addresses after tragedies that ought to come from the president. Politics is football and wishing people a happy holiday and ordering a coffee.) We must avoid politics. We must approach it with a perfectly blank slate, as blank and void as Megyn Kelly’s new NBC show.

There will be a day, and we will know. It will be when there is a president in power whom everyone likes and respects. When Congress is no longer beholden to the National Rifle Association for ever-more-baffling sums. When we have ended gerrymandering and taken action on climate change. After we amend the electoral college. Right after the last of the Confederate statues comes down, maybe a week or two after we have fixed sexism. It will be three or four days after we look around and notice we are living in a truly post-racial society. The day after your Beanie Baby collection finally accrues its full expected value. One brisk afternoon, you will get into an argument on the Internet, and it will make you change your mind about something and feel better about humanity. And then you will know: Today is the day for the conversation about gun laws.

It will be before the sun burns out and all human life is extinct, probably.

So we must wait at least until then, to avoid politicizing the issue. That is only reasonable and fair. That is quite a different thing from “never.”