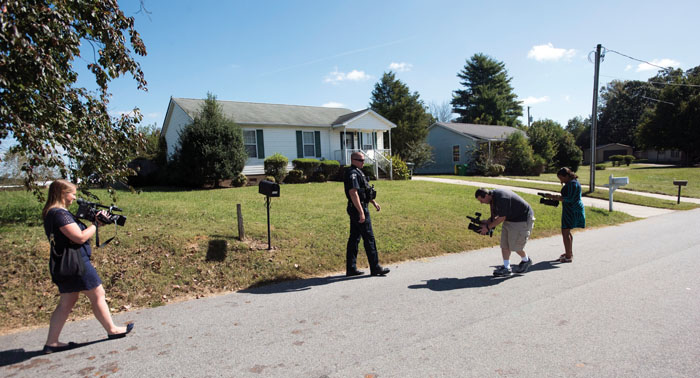 SALISBURY — Reginald and Gena Long have lived in their Fairview Heights neighborhood for 20 years. They agree that they feel safer knowing that police officers are patrolling their street.

The couple’s neighborhood was one of five that was part of a 90-day pilot program in which the Salisbury Police Department conducted foot patrols and collected data. Although the department already had regular foot patrols, this was an opportunity to study what tactics work with the patrols.

Patrols were in five focus areas:

“We think it’s good because we welcome their presence. It’s always good when you can talk face to face,” Gena Long said.

“People need to get to know policemen. It’s letting us know they are open to the community,” Reginald Long said.

Officer B.S. Parry, who has been a patrol officer in and around the Fairview Heights area said, the foot patrols have been a good opportunity for officers to rebuild a relationship with the community.

Regardless of the negativity that may be portrayed in the media, Parry said, 90 percent of the people in the community are happy to see police and are thankful for what they do.

The patrols began in July and wrapped up in September. Officers spent about 15 minutes walking through assigned neighborhoods in addition to their other duties. On Monday, Police Chief Jerry Stokes and Deputy Chief Shon Barnes released data findings.

Barnes said something Stokes set out to do when he first arrived last year was to decrease crime and increase community satisfaction.

“One way to that is to go back to the basics of police work,” Barnes said at a news conference Monday.

He said foot patrols are a system used throughout the United States and a way to get to know the area in which you work.

“While foot patrol in of itself is not community policing, it’s the engagement part of community policing. This is how we engage people to problem-solve with us. Hopefully to reduce crime and reduce the fear of crime as well,” Stokes said.

He said patrols are not just in those five areas, but the department did study those areas. Stokes said officers conducted 766 foot patrols citywide, with some 29 percent in the focus areas.

In the West End, where crime has been a major issue, the department saw a 36 percent decrease in overall crime in regards to violent crimes, larceny and property crimes. In 2016, there were a total of 22 crimes; this year, there were 14. Officers conducted 87 foot patrols in the West End with an average of just over 24 minutes spent there.

“West End has been stressed in our community for many, many years. It’s generally an area we pay a lot of attention to. It’s an area we spend the most time. It’s also an area we saw the most significant reduction. The more time we spent in that area, the better result we got out of what we were doing there,” Stokes said.

The Fairview Heights neighborhood, where A’yanna Allen was killed, had the least amount of criminal activity during the time the data was collected. Allen was killed in December while she slept in her grandmother’s bedroom and a gunman fired at the house. Her grandmother, Shirley Robinson, was also shot but survived.

There were a total of 25 foot patrols in Fairview Heights averaging just over 27 minutes. There were no crimes reported during the 90-day time frame in both 2016 and this year.

Stokes said one of the reasons police wanted to conduct patrols in Fairview Heights was to reassure residents there and to collect any information about the murder.

Stokes said there were few incidents in the Brooklyn South community: five this year and three in 2016. The average time spent on foot patrols in the neighborhood was just over 36 minutes.

He said it’s possible that Brooklyn South residents are more willing to report criminal activity than those of other areas.

There were 25 foot patrols in the Park Avenue community from July to September averaging 27 minutes for each patrol. The total number of crimes decreased slightly there from 20 in 2016 to 17 this year.

The Fulton Heights community saw a slight increase in total crime during the time period tracked. In 2016, there were three crimes reported, all of which were larcenies. This year, there were three burglaries and two larcenies. There were 56 foot patrols conducted in the three-month time frame at an average of just over 27 minutes.

Barnes said some of the things police wanted to know in conducting this experiment was could the officers conduct foot patrols for at least 15 minutes, how much time would an average foot patrol take, would there be any resident complaints, and how many community contacts would the officers make.

Based on the data, most crime incidents occurred in a small percentage of areas in a particular jurisdiction. The likelihood of criminal activity within 30 minutes of a patrol drive-by was 15 percent.

When random police stops lasted 10 to 16 minutes were incorporated, the likelihood of criminal activity dropped to 4 percent.

Capt. Melonie Thompson said one of the major components of the foot patrols is to engage with residents whether it means officers walking up to a homeowner’s door and introducing themselves or giving them a business card.

During night shifts, officers would check to make sure the doors of businesses were locked and patrol hotel parking lots. There was an increase in vehicle break-ins at some area hotels. She said often people would leave items in their vehicles, but officers would check the license plates, connect with hotel staff and go to the person’s hotel room to notify them about the dangers of leaving belongings in plain sight.

Capt. Brian Stallings said during the 90-day foot patrol time frame there were two complaints — one in the West End and one in the East End, but neither concerned foot patrols. He said there were nine commendations during that period.

“Foot patrols gain the trust of the citizens in the city of Salisbury. It’s a learning curve for officers to learn each and every citizen in the sector they work. Overall, it was a success. We want to continue building those relationships,” said Sgt. Corey Brooks, who also spoke during the news conference.

Anyone who information about crime should contact the Salisbury-Rowan CrimeStoppers at 866-639-5245. Tips may also be made anonymously online via tips.salisburyrowancrimestoppers.org.