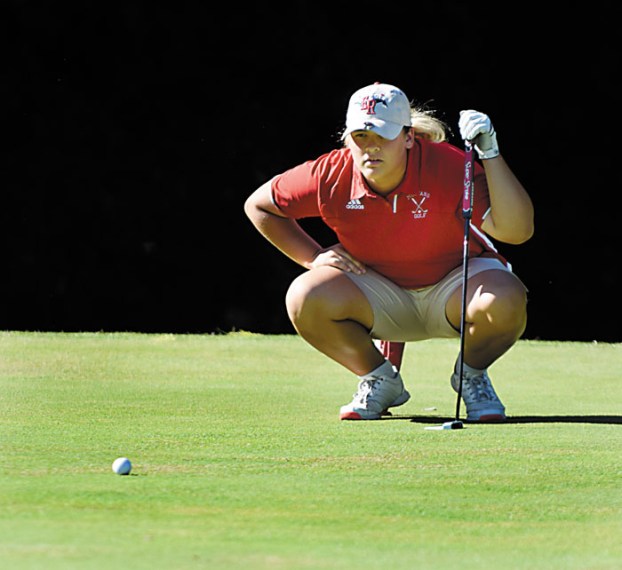 Wayne Hinshaw/for the Salisbury Post …
East Rowan’s Grace Howell tees off. Howell finished in second place in the county tournament with a 43.

SALISBURY — East Rowan may not have the most expressive golfers on its girls team this season, but it probably has the smartest — and that’s all it took for the Mustangs to capture the county championship Tuesday.

East chose the path of least resistance at McCanless Golf Club and cruised to a 17-stroke victory over defending champion Carson.

“This is good because we came in third last year,” junior Carmen Fraley said, after carding a 41 and winning medalist honors. “I was the best overall on my team, but the truth is people on my own team have beaten me in practice.”

“I have Carmen in class and it’s hard to get her to say five words,” said East coach Rhett Teems. “But she and the rest of the girls on this team have learned a lot about golf in the last two years.”

More than anything, they’ve learned to be efficient. “It’s like Teems says, ‘play smart golf,'” Howell said. “We make smart choices and try not to do anything risky. In that way, we all motivate each other.”

That approach worked for Corriher, who double-parred her first hole before settling down and claiming her third straight berth on the all-county team.

“A good score (46) on a little bit of an off-day for her,” Teems said. “She can go lower than that, but got off to a rocky start. She started on (hole No.) five and got an eight — on a par-4 hole. But she bounced back and didn’t let that bother her.”

Corriher’s best shot may have come on the 285-yard, par-4 eighth hole, where her tee shot “hit near the green” and set up a par. “We all had to focus today,” she said.

Howell spent the afternoon steering clear of trouble — particularly on the 175-yard sixth hole. “I hit my tee shot right on the green,” she said with a bright smile. “Then I sank a 15-foot putt for birdie. I’d never done that before, made a birdie on a par-3.”

The prettiest shot of the day was drained by Carson sophomore Kaiya Addison, who recorded an eagle on the 245-yard, par-4 seventh hole. Witnesses reported her drive traveled about 225 yards and settled in an ideal position.

“It was hole-high, right down the hill,” Addison said. “My first eagle ever.”

Her grandmother, Gail Overcash, explained: “It just rolled and rolled for a long time, right into that hole. And then we all just yelled. This family can get loud.”

First-year Carson coach Zach Wyman crossed paths with Addison two holes later. “I saw her walking up to nine an she had a big ‘ol grin on her face,” he said. “I said, ‘You must be pleased with yourself.’ She said, ‘I am,’ but she didn’t tell me she got that eagle. Someone else had to tell me. After the match she just said, ‘Yeah, it was pretty cool.'”

Yet the biggest cheers — and the headlines — were reserved for Fraley. Only a second-year player, she earned her second all-county honor by carding just two bogeys along with two pars and a birdie on No. 2 — a par-4, 300-yard challenge.

“I hit a really good tee shot and put a good chip on it,” she said nonchalantly.

Howell filled in some of the blanks. “She plays a really strong long game, hits some outstanding drives. Even when she’s not doing good on the short game, she makes up for it on the drives.”

Fraley has been a medalist in three of East’s NPC matches this autumn. “She’s got length,” Teems said. “She’s all power. But she has been working really hard on her short game and putting. On this course, on seven and eight, she’s driven the green. But it’s the other things she does that make her outstanding. The thing is, on a small course like this, you don’t always need to do that. You just have to play smart.”

This year, it wasn’t a problem.

NOTES: The rest of the all-county team included Carson’s Addison (48), Amber Goodman (48) and Sophie Brown (51) along with East’s Megan Graham (47) and Haley Fesperman (49). … South’s low scorer was Ellyse Scarborough (55). West was paced by McKenna Clifton (61) and Salisbury by Kyra Crump (66) and Kya Neely (66). … North Rowan did not participate. … The 3A Central Regional meet is scheduled Oct. 16 at Grand National in Greensboro.

Staff report Salisbury’s girls tennis team cruised at home against North Davidson, 9-0, on Monday afternoon. It was a pink-out match to... read more