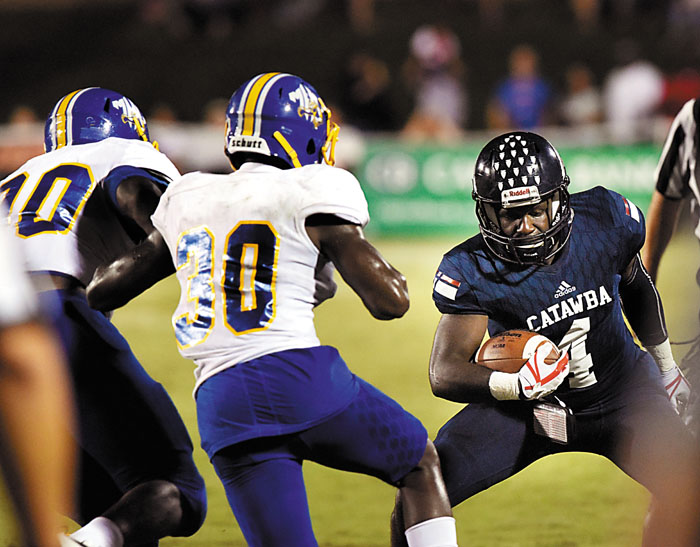 Wayne Hinshaw/for the Salisbury Post ... Catawba receiver Keyon West (4) makes a move against Mars Hill, after making a catch during the game on Sept. 23. West has quietly moved up Catawba’s all-time lists with 116 catches for 1,304 yards.

SALISBURY — Catawba College receiver Keyon West has done what he’s done without fanfare, without accolades, without many pats on the back.

West has been the No. 2 receiver in Catawba’s arsenal of pass-catching weapons for a long time. Carlos Tarrats was the guy everyone noticed during West’s freshman and sophomore years. Sam Mobley, a talented, big-play threat who transferred to Catawba from Louisburg,  has taken over as the chairman of Catawba’s receiving committee during West’s junior and senior seasons.

So even head coach Curtis Walker was a little taken aback when he checked out West’s career stats prior to his final college season.

“I’d just told Keyon that it was time for him to make himself relevant,” Walker said. “But then I looked at the numbers, and he’s moving up on Catawba’s all-time lists. I realized I was mistaken. I had  to apologize to him. He’s been relevant.”

West (5-11, 185) joined Catawba’s exclusive 100-catch club with his first reception this season against St. Augustine’s. He’s the 17th to be inducted into that fraternity.

West’s swiveling, acrobatic, last-minute grab in the end zone that won the Sept. 9 game at VMI for the Indians has provided the defining moment of his career to this point, but he’s determined to top it. While he already owns 116 career catches (tied for 12th all-time at Catawba) for 1,304 yards and nine touchdowns, he’s confident more noteworthy snags still lie ahead of him.

“Have I flown under the radar —well, maybe a little bit,” West said. “But the way I look at it, I could have done more and should have done more. I know I can do more than I’ve done. I don’t just want to move up Catawba’s list, I want to be All-South Atlantic Conference.”

West grew up in an athletic family in North Augusta, S.C., about four miles across the state line from Augusta, Ga. West’s biggest rival growing up was his sister.

Kayla West was a few years older than Keyon and a talented basketball player. Rregion player of the year during her days with the North Augusta Yellow Jackets, Kayla would go on to play basketball for D-I Texas Southern, where she started as a freshman. She finished her hoops career at D-II Lander and earned a business degree.

Growing up, Kayla and Keyon had their physical battles in the driveway. There were jeers, tears and shoves. Their parents let them go at it. Competition was helping both of them.

“She was a very good athlete and bigger than me until I started growing and it was a  heated rivalry between us for years,” Keyon said. “Both our parents were good athletes and all of us are competitive.  When I finally beat my dad for the first time in basketball, it was the only time. He wouldn’t play me after that.”

West broke North Augusta receiving records set by Matt Hazel, who went on to play at Coastal Carolina, was drafted in the sixth round by the Miami Dolphins, and is now a member of the Indianapolis Colts.

Still, West wasn’t swarmed by college recruiters. At West’s high school signing day in February, 2014, teammates inked with Georgia Tech, Air Force and Appalachian State, so it’s not like he was the most highly regarded member of his squad.

“A lot of schools were interested, but not a lot of offers,” West said.

The most interested college coach was Corey Ready, the Catawba assistant who had smashed the Indians’ receiving records during a sparkling career that lasted from 2002-05. Ready had been the primary target of Catawba’s all-time passing leader Luke Samples. If anyone can spot a potential standout receiver, it’s Ready, and he loved West.

“Every Tuesday during the recruiting period, I would get a call from Coach Ready,” West said with a smile. “He wanted me. Catawba wanted me.”

The rest is history. West started five games for the rebuilding Indians as a true freshman in the fall of 2014 and he started most of the time as a sophomore and junior. The numbers have piled up. West has caught TD passes from four different QBs — Mike Sheehan, Reid Carlton, Joseph Dress and O’Brien. There was a two-TD game against Tusculum in 2016, but mostly the impressive stats grew gradually, like pennies in a bank. West isn’t likely to have a 10-catch game, but on any given Saturday, he’s always good for three or four.

“It says a lot about him that he’s been a starter for four years, and he’s hurt our opponents silently and quietly,” Walker said. “He’s an excellent route-runner and he finds the holes in the defense. We’ve got a lot of good options now — West, Gavin Rose, Jourdan Osinskie. There are always going to be opportunities for us to make plays in the passing game. It’s not like a team can just take Mobley away and stop us from throwing the football.”

Walker said West reported for preseason camp “a little chubby” in previous years, but not for his senior season.

“I’ve improved my level of conditioning and I’ve also improved my ability once the ball is in my hands,” West said. “I’ve surprised some of my teammates with my speed.”

Evidence of increased speed was apparent on opening night when West suddenly wheeled 29 yards to the house with a screen pass. Then he was able to get down the field  for that 25-yard TC catch against VMI with just 42 seconds left in the game.

“I’d dropped a few passes before that big catch,” West said. “It meant a lot that the team still had confidence in me to make a play.”

The wonderful catch that silenced 4,654 fans in Lexington, Va., was the loudest one West ever has made, but he’s been contributing quieter receptions for years.