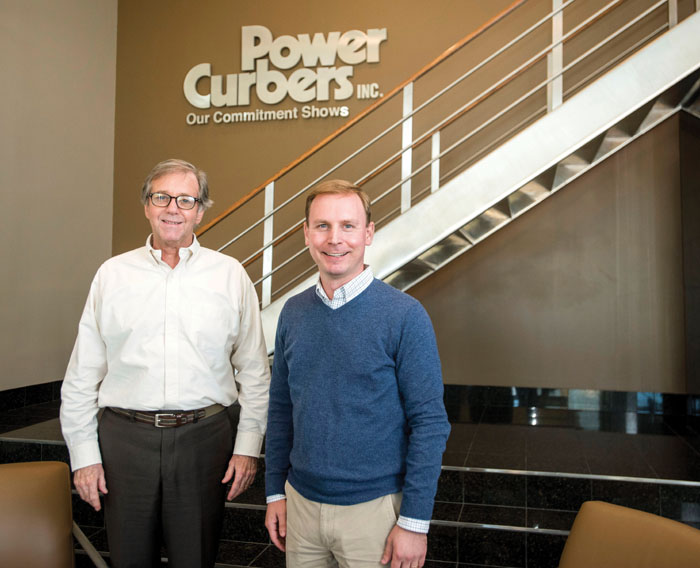 SALISBURY — Power Curbers President Dyke Messinger announced Monday that the company and its subsidiaries have  been sold to a Charlotte family, Steve and Lee Cornwell of Cornwell Capital.

A maker of curbing and paving machines in Salisbury since 1953, Power Curbers will continue to operate out of its headquarters on Bendix Drive, and Messinger will stay on as president and CEO for two to three years, when he turns 70, he said.

Power Curbers was founded by Messinger’s grandfather, John S. Henderson, and Ernest Hardin. The business started with a design for the world’s first automatic curb machine, an engineering breakthrough that helped streamline the process of laying out highways, medians and other road infrastructure projects.

The company grew into of one of the country’s leading paving machinery producers, for both agricultural and infrastructure projects.

Its reach is worldwide. Power Curbers machinery paved railbeds for the “chunnel” across the English Channel in the early 1990s. Most of its work is in the United States now, Messinger said, though recent projects include orders from India and Indonesia and a million-dollar-plus order from Argentina.

During an interview Monday at Power Curbers, Lee Cornwell said he and his father started their business in 2015, and Power Curbers was the kind of company they love.

“We want to continue to grow the business,” Cornwell said. “We invest indefinitely. We don’t look for companies we have to reinvent.”

Power Curbers has a great management team in place, Cornwell said. “We feel very comfortable with them.”

He said he also wants to maintain Power Curbers’ record as a corporate citizen. “We love how community-minded the company is and how invested they are, and that’s something we want to see continue.”

Messinger said he is happy the company is going to a family that is committed to staying in the business for 40 years and “wanted to see the same kind of success we’d had for 64 years.”

He said the Messinger family started planning to sell the company about a year ago and talked to several possible buyers, looking for a good fit.

A common friend recommended that he and his managers talk to the Cornwells. They were the last group the Power Curbers team met with, and Messinger said consensus came quickly after the Cornwells left the room.  “We all looked at each other and said, ‘That’s the one,'” Messinger said.

Lee Cornwell said the feeling was mutual. On the way back to Charlotte that day, he said, he told the others with him, “Well, I guess I know what I’m going to be working on for the next few months.”

The Cornwells also own Burlan Manufacturing in Gastonia, which makes industrial fabrics.

Salisbury resident was at Las Vegas airport during deadly…