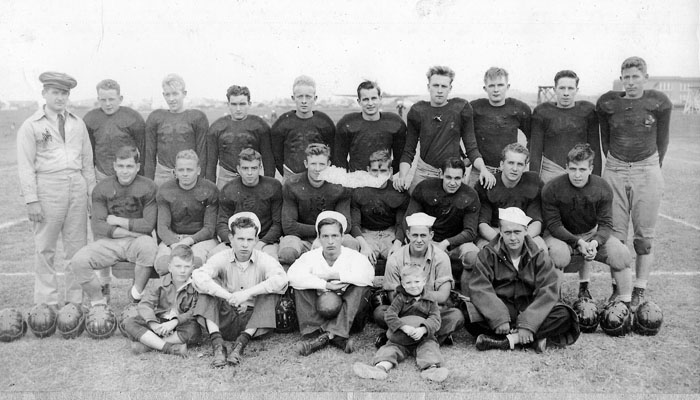 Carlos Euart, who lives in Faith, shared this photograph showing members of the aviation ordnance football team, which had won the Saturday football league championship at the Naval Training Station in Norfolk, Va. Carlos’ father, Carl Eugene Euart, is the last man on the right on the back row. Another Rowan countian in this picture is Ralph Hudson Bingham, who is the last man on the right in the middle row. Bingham was from Spencer; Euart, from rural Rockwell. Carlos Euart said his father would later serve on the USS Bennington aircraft carrier in the South Pacific during World War II. After the war, Carl returned to Rowan County and worked as a machinist and welder with Cannon Mills and related companies for 55 years until his retirement at 79 years of age. Carl Euart and Ralph Bingham were friends. In one of those it’s-a-small-world things, Carlos says Ralph’s son, Russell, lives across from the road from him today. Carl Euart died two years ago at age 94. This photo from the Navy eventually appeared in the newspaper in 1942 under the headline ‘Rowan Youths on NTS Champ Eleven.’