Salisbury resident was at Las Vegas airport during deadly shooting 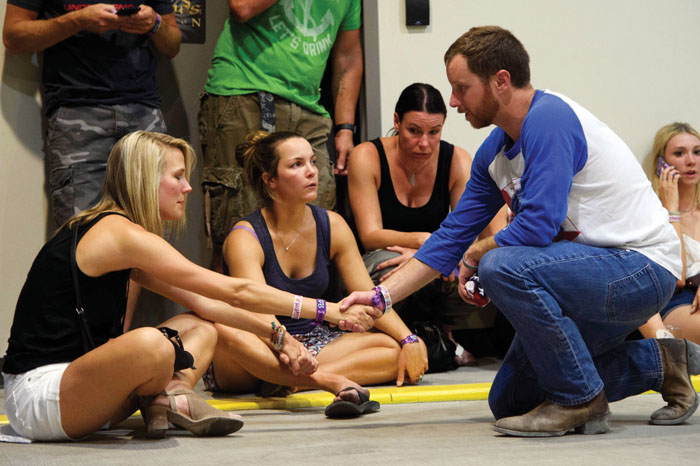 People hold hands in prayer while hiding inside the Sands Corporation plane hangar after a mass shooting in which dozens were killed at the Route 91 Harvest Festival on Sunday,. Al Powers/Invision/AP

SALISBURY — Greg Shields, president of the Downtown Salisbury Inc. board of directors, and his wife, Kristin, were on their way to the Las Vegas airport Sunday when shots erupted at a concert where at least 59 people were killed in the deadliest mass shooting in modern U.S. history.

The couple had been on vacation with friends, visiting the city for another concert held Saturday night. By the time news of the tragedy reached Shields, he had already boarded his flight and taken his seat. That’s when the woman next to him and his wife got a phone call from her son, who works at the Mandalay Bay hotel from which the gunman fired.

“And while that was going on, people who were on their iPhones were starting to get news alerts,” he said.

Flight attendants and the pilot made announcements, trying to keep passengers updated. And when the airport was shutdown, Shields and the rest of the passengers deplaned “for security reasons.”

Inside of the airport was a mass of noise and confusion as people tried to get in touch with loved ones, watch the news unfold, or keep up with rapid flight and gate changes.

The Shieldses spent the time trying to contact their friends, who had chosen to stay an extra night in Vegas.

“We were trying to get in touch with them, didn’t quite know where they were,” he said.

They learned later that the son of one friend was at the concert when the shooting started. He sent the Shieldses a text message after the chaos died down, describing people dropping on either side of him and how he’d had to use his belt as a tourniquet.

“I don’t know how you deal with something like that emotionally,” Shields said.

But in the airport, there was nothing to do but wait — and worry.

“We were doing what most everyone else was doing. We were looking at our phones and trying to monitor Twitter and news stations,” he said. “ … It was awful to see the numbers just rising.”

The Shieldses and their friends were all safe. They finally pulled into their driveway just after 1 p.m. Monday.

“I feel very fortunate that we’re safe and we’re home safe,” he said.

A nurse at Carolina Oncology Associates confirmed that several staff members were in Las Vegas during the shooting. Messages requesting interviews were not returned by press time Monday.

If you are a Rowan County native who was in Las Vegas on Sunday night and would like to share your story, contact reporter Rebecca Rider at 704-797-4264 or rebecca.rider@salisburypost.com

Respect Life gathering at Square sends up prayers for…