Respect Life gathering at Square sends up prayers for women, the unborn 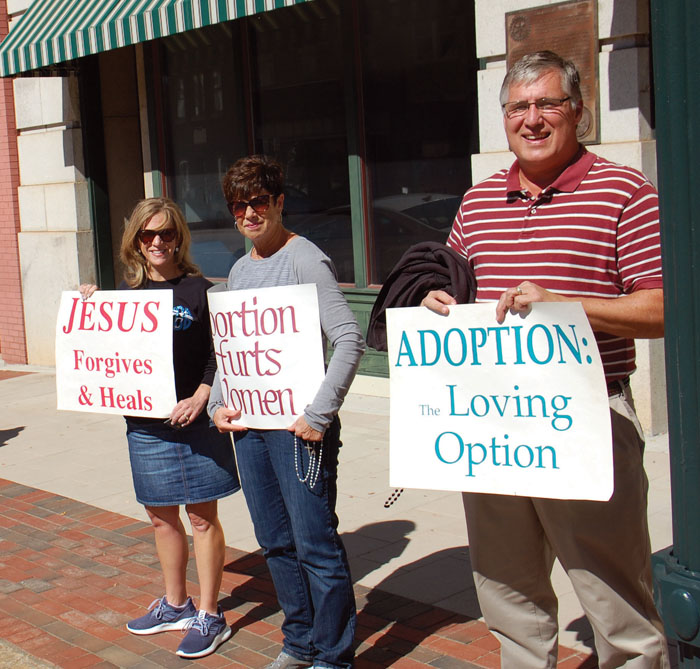 SALISBURY — Len Kobylus describes it as a Good News story, and it is.

His daughter was in high school and pregnant. There was some discussion about an abortion, but she gave birth to the child out of wedlock and with the strong support of her family over eight years pursued her collegiate studies through earning a doctorate at N.C. State University.

Today, she is a math professor at Winthrop University, and her son is 16 years old and looking at colleges himself.

Because of their experience, Len and Pat Kobylus became devoted to the pro-life movement. They attended seminars and classes. Len headed a highly successful state effort through the Knights of Columbus to provide ultra-sound clinics for women.

The couple stood near the Square in Salisbury Sunday afternoon holding signs and participating in a Respect Life gathering organized and populated mostly by members of Sacred Heart Catholic Church.

“Every year that we can make it,” Len Kobylus said, “we come out and pray for the unborn.”

October is the 46th annual Respect Life Month, and Catholic churches across the country commemorate it through prayer, education and advocacy. The first Sunday in October also is Respect Life Sunday for the local church.

Sunday’s Respect Life participants stood on the four corners of the Square and along the streets on each side, holding signs for passing motorists to take in. There also was prayer and a song or two.

The signs had messages such as “Adoption: the Loving Option,” “Jesus Forgives and Heals,” “Abortion Hurts Women,” and “Abortion Kills Children.”

The church handed out handmade rosaries, which were blessed, and the backs of posters included suggestions for prayer — for the unborn and for women contemplating abortion, for example.

Rossi stressed it would be a false interpretation to say those gathered Sunday were there to condemn women who have had an abortion.

The church believes in the human person, that abortion is evil and that every life is sacred and created in the image  of God — whether in the womb or at the end of life, Rossi said.

The Catholic message, for one, speaks of the value and God-given dignity of human life, and that Catholics are called to care for those unable to care for themselves.

Rossi said it’s the duty of Christians to support any woman struggling with an unplanned pregnancy. Christians should surround them with the support, love and resources they need to bring the pregnancy to term, he said.

Abortion is a painful issue and an unpleasant word, but it cannot be ignored or allowed to become sterilized in society and empty of meaning, Rossi said.

Sunday’s Respect Life gathering lasted about an hour, as planned.

In recalling his and Pat’s own story of providing the love and support their daughter and her son needed, Len Kobylus said, “We understand that God, luckily, gave us the strength to make the right decision.