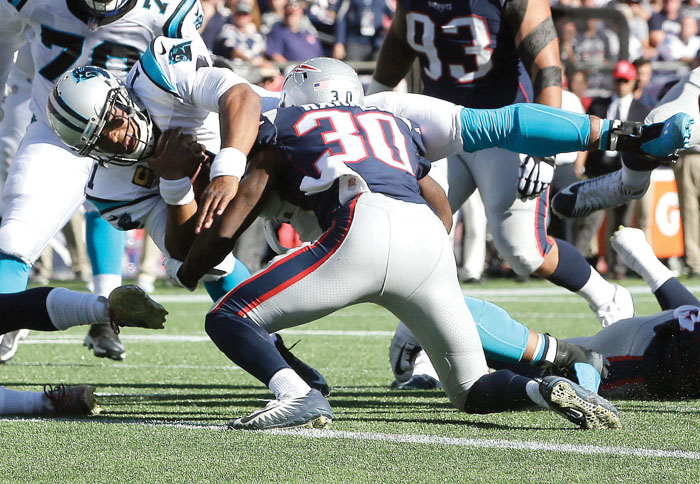 FOXBOROUGH, Mass. (AP) — The Carolina Panthers have been patiently waiting for the kind of performance from Cam Newton that had elevated him to the elite among NFL quarterbacks.

He finally delivered — against the reigning Super Bowl champions.

Graham Gano hit a 48-yard field goal as time expired, Newton threw for three touchdowns and ran for another and the Panthers stunned the New England Patriots 33-30 on Sunday.

The winner served as redemption for Gano, who missed an extra point in the third quarter. It was also the first signature game of 2017 for Newton, who threw four interceptions and just two touchdowns in Carolina’s first three games.

“I felt this was a breakthrough game for us, a statement game,” Newton said.  “We had some careless turnovers, including (my) interception. But for us to come into a hostile environment, to battle, face some adversity early on, and still hold on at the end — it was a great team win for us.”

It was the second home loss this season for the usually unbeatable Patriots at Gillette Stadium. The defeat marked just the second time since 2012 that Tom Brady has lost two home starts within a season.

Newton finished 22 of 29 for 316 yards and an interception, picking apart a New England defense that was giving up an NFL-worst 461 yards and 31.7 points per game. The Patriots forced a pair of turnovers, but had trouble containing Newton’s stable of targets. After last week’s loss to New Orleans, receiver Kelvin Benjamin started and caught four passes for 104 yards.

“A lot of people counted us out this game,” Stewart said. “There are a lot of guys on this team that deserve their credibility. …We expected to win today.”

Carolina (3-1) finished with 444 total yards, marking the fourth straight game the Patriots have given up at least 300 yards.

“So much stuff went wrong today,” Patriots safety Devin McCourty said. “Giving up 30 points a game, 400-something yards.  If it was one thing, we’d be better one of these weeks. It’s just all of us. It’s all 11 guys who are out there not playing good football.”

The Patriots cut a 30-16 deficit in half on an 8-yard run by Dion Lewis with 8:46 remaining. Linebacker Dont’a Hightower forced a punt on Carolina’s next drive when he sacked Newton on third down.

Brady then found Danny Amendola in the back of the end zone on fourth-and-goal from the 1 to tie the game. But two penalties on New England’s defense on the Panthers’ final drive set up Gano’s winner.

If not for Gano’s missed extra point, Carolina could have taken 15-point lead early in the fourth quarter following Newton’s 7-yard touchdown run. He said he didn’t let it deter him when his number was called again. Prior to the final drive Gano said receiver Devin Funchess told him, “We’ll get you in range, don’t even worry.

“This game meant a lot us,” Gano said. “We had a lot of doubters out there. We have a great football team and I feel like we proved it today.”

Newton mostly had his way with the Patriots in the opening 30 minutes as the Panthers took a 17-16 lead into the locker room. He led them to a field goal on their first series of the game, completing passes of 14, 2 and 13 yards.

Newton tried to get too creative on their second drive, tossing into double coverage. He was intercepted by Malcolm Butler.

But after the Patriots took a 10-3 lead on a 2-yard pass from Brady to Chris Hogan, Newton led Carolina on a six-play, 75 yard drive capped by a 28-yard touchdown on a screen pass to Fozzy Whittaker.

He was spot-on again late in the half, leading Carolina on a nine-play, 84-yard drive that ended with a 10-yard strike to Funchess.

New England was able keep pace thanks to three first-half field goals by Stephen Gostkowski. It included a team-record 58-yarder as time expired in the second quarter.

No player kneeled during the anthem prior to the game.  Stewart and linebacker Thomas Davis stood with their hands pressed in front of them as if in prayer.  The Patriots all stood with one hand over their heart and the other on the shoulder of the player next to them.