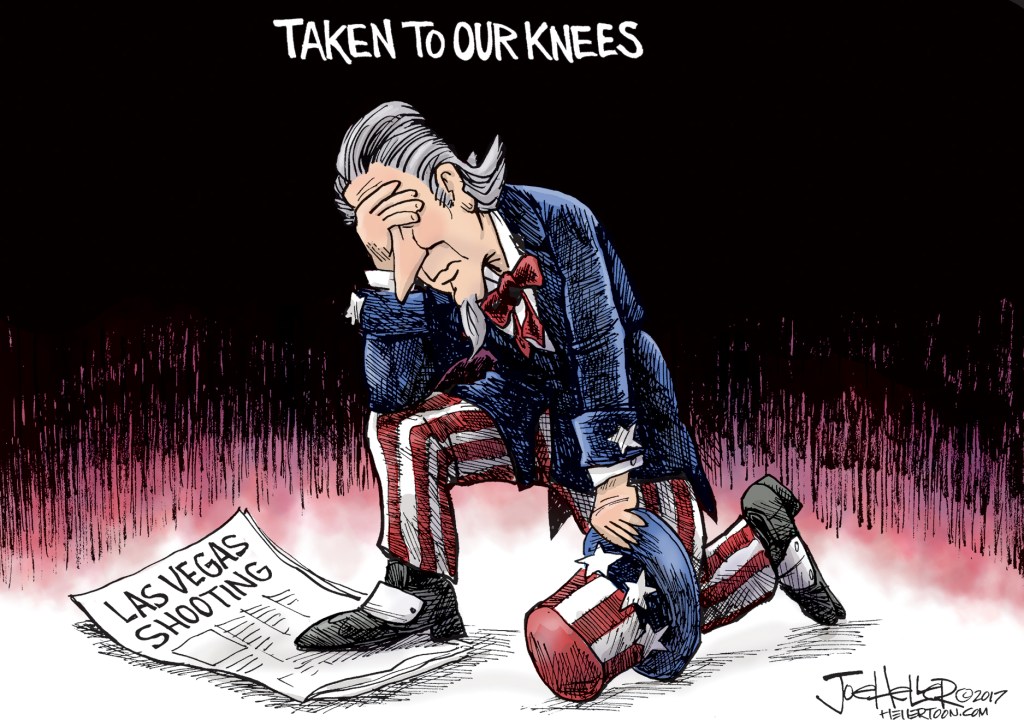 The relative frequency of mass shootings — horrific atrocities that occur too often — has become entirely too high in American society. We’ve gone too long without seriously examining and addressing the underlying problems that allow people to easily use weapons to kill innocent civilians.

Mass shootings are so common in America that they happen almost daily, depending on the definition of such events. One website, Mass Shooting Tracker, defines such events as four or more people shot.

Using that definition, the website finds there have been 339 mass shootings in 2017, resulting in more than 1,600 injuries and about 460 deaths. That’s just this year.

The latest such incident occurred in Las Vegas on Sunday night. A 64-year-old man killed at least 58 people and injured hundreds of others with a barrage of automatic gunfire sprayed onto a music festival from the 32nd floor of a hotel.

Meanwhile, the tally of mass shootings also includes at least two deaths and two injuries from a July incident in Salisbury that occurred in front of Go Burrito. Once distraught by the fact that such an event occurred in the heart of our city, we’ve now completely forgotten it happened, just like the brutal murder of 7-year-old A’yanna Allen. Neither incident resulted in significant change in Salisbury. We mourned their deaths and moved on.

Instead of treating mass shootings like a passing fad, we should recognize the events for what they are — maddening manifestations of evil — and work to make a change.

There’s no need to take away the guns of law-abiding citizens — a talking point that rapidly arises whenever reasonable people try to have a conversation about gun violence. There’s also no reason to declare mental health as the panacea for future incidents. And the “good guy with a gun” scenario doesn’t work in the case of Las Vegas. Can you imagine hundreds of people firing their guns at hotel windows? A good guy with a gun may help in some scenarios, but that’s not the cure to all mass shootings.

It’s not possible to completely eliminate mass shootings from American society — those determined enough will find a way around any new policies — but if we engage in well-intentioned conversations instead of basing talking points on nonsensical and unrealistic proposals, a solution will come. It’s also important that we don’t glamorize mass shootings by plastering the criminal’s face on social media and TV news broadcasts. There’s no need to loop video of people fleeing danger as gunfire crackles and sirens wail in the background.

Americans shouldn’t be numb to the fact that hundreds of Americans die every year in mass shootings — from gang activity to domestic terrorists — and that such incidents can be prevented.

Most of all, Americans should demand that elected leaders stiffen their backbones and seriously devote attention to stemming the tide of gun violence in our nation.