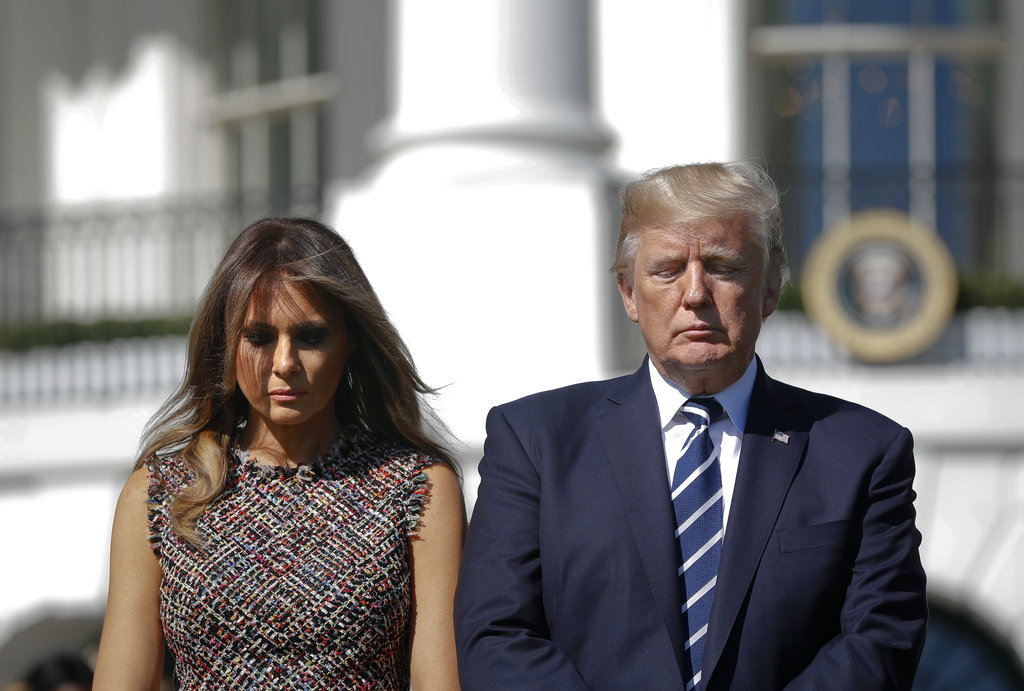 President Donald Trump and first lady Melania Trump during an event at the White House in 2017. AP file photo

Ronald Reagan after the Challenger disaster. Bill Clinton after the Oklahoma City bombing. George W. Bush after the terror attacks in Washington and New York. Barack Obama after the church shootings in Charleston.

And now this. Donald Trump after Las Vegas.

Almost all of them are prompted by these occasions to speak to American unity, as Trump did when he said, in his formal remarks, that Americans’ “unity cannot be shattered by evil, our bonds cannot be broken by violence.”

These are sober moments of condolence and compassion, the sort that chief executives neither expect nor are prepared for, the kind that call upon presidential presence. For Trump — whose responses to the confrontation in Charlottesville, Virginia, and even the London Bridge attack, stirred rather than cooled passions — this was an important challenge, especially so for a president who has stretched the boundaries of presidential comportment.

And amid the flash of news reports and the reckoning of body counts growing out of the worst mass shooting in the country’s history, Trump — still under criticism for his response to the Puerto Rico hurricane disaster and for his attacks on the mayor of San Juan — responded to both the news and the moment.

For his critics — who have assailed him in the past several days for stoking controversy over the national anthem at NFL games, for undercutting his own secretary of state over North Korean negotiations and for producing a tax overhaul that would favor business and the wealthy — there was little to criticize, although advocates of gun control surely wish he had used this occasion to embrace their cause.

He produced a spare statement, expressing the nation’s grief, and pledged to visit the scene. Simple, perhaps, but significant in Trump’s presidential passage, which so often has been marked by excess — his own, and his critics’.

It was a minute waltz of woe: He did not say anything he did not know. He did not stumble over wording. He did not use the occasion to campaign for specific legislation or political gain. And when he used the pronoun “I,” it was in service of conveying his thanks, as in “I want to thank the Las Vegas Metropolitan Police Department and all of the first responders for their courageous efforts.”

There is no playbook for a presidential response to tragedy, and yet, whether inadvertently, instinctively or intentionally, Trump hit many of the appropriate touchstones.

Like Bush after the 9/11 terrorist attacks, Trump employed the word “evil” to describe the acts that brought horror to America’s door.

Like Obama after the Charleston church shootings, Trump sought to find consolation in calamity. In connecting the Mother Emanuel killings to decades of violence against black houses of worship, Obama said he was “confident that the outpouring of unity and strength and fellowship and love across Charleston today, from all races, from all faiths, from all places of worship, indicates the degree to which those old vestiges of hatred can be overcome.” In urging Americans not to surrender to anguish, Trump said, “Even the most terrible despair can be illuminated by a single ray of hope.”

Like Clinton after the Oklahoma City bombings, the president leaned on Scripture. Clinton quoted Romans 12:21, urging Americans “not (to) be overcome by evil, but overcome evil with good.” The remarks from Trump — not ordinarily known for spiritual introspection — were in his own words: “Scripture teaches us the Lord is close to the broken-hearted and saves those who are crushed in spirit. We seek comfort in those words, for we know that God lives in the hearts of those who grieve.”

And like Reagan after the Challenger spacecraft disaster, Trump expressed sober and sincere thanks. To the engineers, technicians and aerospace scientists of NASA, the 40th president said, “Your dedication and professionalism have moved and impressed us for decades. And we know of your anguish. We share it.” To the police and rescue squad workers of Las Vegas, the 45th president said, “The speed with which they acted is miraculous and prevented further loss of life.”

In that Challenger speech, Reagan quoted the Royal Canadian Air Force aviator and poet John Gillespie Magee Jr., saying that Americans would not forget the astronauts who waved goodbye on their way to the space shuttle, and “slipped the surly bonds of Earth” to “touch the face of God.” Trump made no such literary allusions, but said during his brief remarks, “I know we are searching for some kind of meaning in the chaos, some kind of light in the darkness. The answers do not come easy.”

That, too, is in the American presidential tradition.

In perhaps the greatest American speech ever, Abraham Lincoln expressed wonder and mystery at the tragedy of the Civil War. “The Almighty has His own purposes,” Lincoln said in his second inaugural address, in 1865, a month before the war would end and he would be assassinated, before quoting the Book of Matthew: “Woe unto the world because of offenses; for it must needs be that offenses come, but woe to that man by whom the offense cometh.”

Unlike the famous passage from F. Scott Fitzgerald — “There are no second acts in American life” — American presidents do get second acts. The second act for Trump comes with his twin visits, first to Puerto Rico and then to Las Vegas, Tuesday and Wednesday. The passage from Fitzgerald comes from “The Last Tycoon” — an unfinished novel.

Shribman is executive editor of the Post-Gazette.