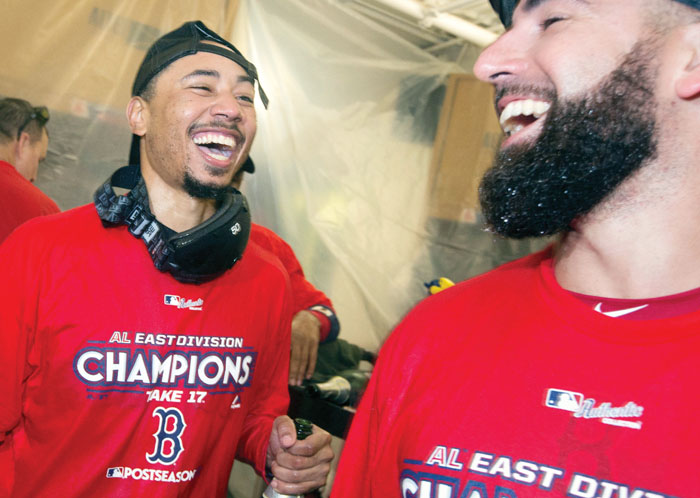 BOSTON (AP) — The hard chopper bounced off first baseman Mitch Moreland’s glove and high into the air. Second baseman Brock Holt jumped to glove the ball and flipped it to first, where David Price was covering.

When the Boston Red Sox needed him, Price was there.

The one-time ace came out of the bullpen in relief of Drew Pomeranz and squelched a dangerous seventh-inning rally on Saturday, helping the Red Sox beat the Houston Astros 6-3 and clinch the first back-to-back AL East titles in franchise history.

With the win, the Red Sox avoided a possible tiebreaker against the rival New York Yankees.

“That was important: Just get it done today,” star Hanley Ramirez said afterward in the Red Sox clubhouse, where music blared, the lockers were covered in plastic and players wore goggles to protect their eyes from the spray of beer and domestic sparkling wine.

With the Boston win, the Yankees were left with a wild-card spot and a one-game matchup against the Minnesota Twins for the right to play Cleveland in the best-of-five AL Division Series. The Astros’ loss meant the Indians, with the tiebreaker over Houston and 101 wins entering Saturday, clinched the best record in the AL.

Boston’s win set up an immediate rematch with the AL West champion Astros in the ALDS, starting Thursday in Houston.

“This is a good team across the way. We’re a good team. We’re both division champions,” Astros manager A.J. Hinch said. “We’ll obviously see a lot of each other over the next 10 days.”

Boston leads New York by two games with one to play, the remnants of what had been a five-game lead when the Red Sox returned to Fenway Park for a season-ending homestand. A loss Saturday — coupled with the Yankees’ 2-1 win over Toronto — would have forced Boston to use Chris Sale on the final day of the season to avoid a tiebreaker on Monday.

The AL East has not had needed a one-game playoff since Bucky Dent’s homer cleared the Green Monster to help the Yankees eliminate Boston in 1978.

“We get a chance to get a couple of days rest,” said manager John Farrell, who scratched Sale from Sunday’s start and said Hector Velazquez will pitch instead. “Chris is deserving of a couple of extra days to just get some rest.”

Mookie Betts homered and scored three times, and Pomeranz (17-6) had a two-hit shutout through six innings. With a heavy rain beginning to fall in the top of the seventh, the Astros rallied against Carson Smith and made it 5-2 before Price came in.

DENVER (AP) — The Colorado Rockies sprayed soda around the clubhouse and even did a bit of dancing after clinching their first postseason berth since 2009.

Then, they had to go play a game — pressure free, of course.

Colorado sewed up the second NL wild-card spot courtesy of St. Louis’ 7-6 win over Milwaukee on Saturday afternoon. Former Rockies pitcher Juan Nicasio recorded the final out for the Cardinals.

The Rockies will face Arizona in the NL wild-card game Wednesday night.

Colorado fans trickling into Coors Field before the game against Los Angeles let out a roar after the final out. The Cardinals-Brewers game was shown on the scoreboard.

In the clubhouse, the Rockies wildly celebrated after gathering in front of a TV. Ian Desmond showered his teammates with soda, Jonathan Lucroy raised his hands in triumph, Nolan Arenado let out a scream and Carlos Gonzalez broke into a dance.

The team received an ovation from the crowd as it took the field. Colorado pushed back the first pitch by 21 minutes, calling it a weather delay, although no rain fell and the tarp wasn’t unrolled.

NEW YORK (AP) — In a way, manager Joe Girardi figures, Aaron Judge and some of the young New York Yankees without any postseason experience already have gotten the feel of playoff pressure.

New York needed two wins and two losses by Boston to force a tiebreaker Monday at Yankee Stadium. Instead, the Yankees will host Minnesota in the wild-card game Tuesday.

“I started thinking about that the last couple of days where in a sense they’re elimination games for us,” Girardi said. “We were five down coming home from the road trip and our guys just continued to play well. They continued to play loose. They continued to make pitches, grind out at-bats and that was encouraging to me because it’s not like we’ve had a chance to turn it off and I like that.”

The wild-card winner will face Cleveland in the best-of-five AL Division Series. Boston, which beat Houston about 20 minutes after the Yankees won, is set to take on the Astros in the playoffs.

Replacement starter CC Sabathia (14-5) won his fifth straight decision. With the Yankees still in contention for the division title to begin the day, Girardi opted for Sabathia to pitch on his regular four days’ rest in place of the originally scheduled Jaime Garcia.

The veteran left-hander didn’t disappoint, allowing four hits and striking out six over 5 2/3 shutout innings. The Yankees (91-70) improved to a season-high 21 games over .500.

Sabathia’s only close call came with one out in the sixth, when Ryan Goins lifted a fly to deep right that was snagged by a fan reaching over the wall. The initial ruling on the field was interference, which was challenged and upheld after a 38-second review.

Goins got a double and was stranded when Sabathia fanned Teoscar Hernandez and reliever Chad Green retired Josh Donaldson on a flyout.

Sabathia is 5-0 with a 2.91 ERA in eight starts since returning from the DL on Aug. 19. His 237 career wins put him ahead of Whitey Ford for sole possession of 16th place among left-handers on the all-time list.

Aroldis Chapman pitched a perfect ninth for his 22nd save in 26 chances. The Cuban fireballer has not allowed a run in 11 appearances this month.

Judge hit a drive estimated at 484 feet in the fourth, the shot landing on a walkway behind the left-field bleachers. Judge leads the AL in home runs, and tied Mickey Mantle (1956) for eighth place on the club’s single-season list.

“Oh gosh, the ones he hits,” Toronto manager John Gibbons said. “I mean, you sit there and admire some of the distance on some of those things.”

It was the rookie slugger’s 33rd homer at Yankee Stadium, passing Babe Ruth (1921) for the highest single-season home total in franchise history. Judge is 6 for 12 against Marcus Stroman (13-9) with three home runs.

“I’ve never played for a team like this. Everyone gets along,” Judge said. “That’s what championship teams are made of, so I’m excited about what’s going to happen here in the postseason.”

Toronto scored in the eighth on Donaldson’s sacrifice fly.

Yankees: Judge was in the lineup at DH, which Girardi considered a half-day off. He planned on giving Judge a full day of rest at some point, but hadn’t gotten an opportunity with the club still trying to catch Boston. Girardi said after the game that he plans to sit some of his regulars Sunday.

Yankees: LHP Jordan Montgomery (9-7, 3.96 ERA) will make his 29th start of the season, fifth most by a rookie in team history.

In an interview, Gonzalez simply said to the fans: “This feels really good. Excited for what’s next. Thanks!”

Gonzalez is the only player remaining from the ‘09 squad that lost to Philadelphia in an NL Division Series.

“Eight years later, that’s crazy,” Gonzalez said. “It shows you it doesn’t matter all the talent you have, it’s all about being on the same page. Everybody has been pulling for each other since Day One.

“We believed we were a really good team. Sometimes, it’s just that simple for some players. You know, ‘Hey, you’re good. You can beat anybody.’”

The winner of the wild-card game in Arizona will meet Los Angeles in Game 1 of an NLDS on Friday at Dodger Stadium.

This is a team that finished 75-87 last season, parted ways with manager Walt Weiss and brought in Bud Black. Their big offseason acquisitions were Desmond and closer Greg Holland.

The Rockies were a loose group during batting practice, with outfielder Gonzalez even singing for first baseman Mark Reynolds.

Really, they’ve been that way all season.

Colorado was the talk of baseball early after a fast start. The team hit a rough spot in August — its only losing month — before regrouping.

“We’ve had some tough seasons since I’ve been here,” Arenado said. “It hasn’t been an easy ride, but we’re here now and I guess that’s what all the hard work and all the preparation in the offseason and the season is — for moments like this.”

Pomeranz allowed one run on three hits and two walks, striking out three. … Lance McCullers (7-4), who was pitching for a spot in the postseason rotation, allowed five runs on six hits and two walks, striking out six in 4 1/3 innings. … With one hit in four at-bats, Jose Altuve’s major league-leading batting average fell one point, to .347. … Betts and Colorado’s Nolan Arenado are the only players to have at least 100 RBIs and score at least 100 runs in both 2016 and 2017. … Andrew Benintendi is the third Red Sox rookie with 20 homers and 20 steals in a season, joining Ellis Burks (1987) and Nomar Garciaparra (‘97).

Red Sox: 2B Dustin Pedroia was scratched on Saturday morning because of concerns over how the wet conditions might affect his sore left knee.

The teams finish out the regular season on Sunday. With all positions clinched, Dallas Keuchel will throw a simulated game instead of starting. RHP Collin McHugh (4-2) faces the righty Velazquez (3-1), who replaced Sale.

Four in a row for the Wolfpack