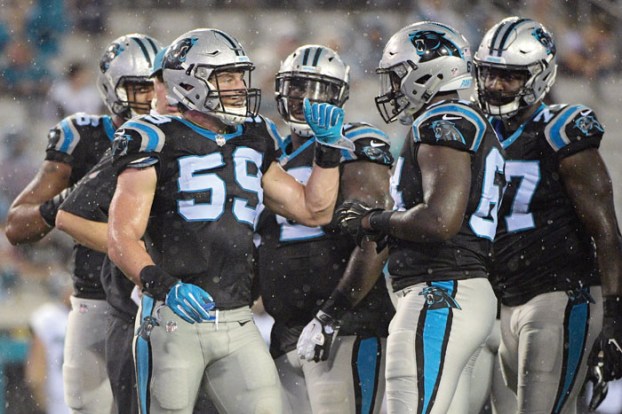 FILE - In this Aug. 24, 2017, file photo, Carolina Panthers linebacker Luke Kuechly (59) leads a huddle during the first half of an NFL preseason football game against the Jacksonville Jaguars in Jacksonville, Fla. The NFL’s top-ranked offense and top-rated defense are set to square off Sunday when the New England Patriots host the Carolina Panthers. (AP Photo/Phelan M. Ebenhack, File)

FOXBOROUGH, Mass. (AP) — The Carolina Panthers’ defense made a statement during the first two weeks of the season when it held the San Francisco 49ers and Buffalo Bills to a combined six points in back-to-back victories.

It took a step backward in last week’s loss 34-13 to New Orleans, but still is the NFL’s top-ranked defense entering Sunday’s matchup with New England. Through three games, Carolina is allowing just 252 yards per game.

The Panthers (2-1) now are hoping to fix whatever vulnerabilities were exposed against the Saints as they prepare to face Tom Brady and a Patriots offense that is averaging a league-best 441 yards per game.

Carolina coach Ron Rivera said that even at 40 years old, he thinks Brady is as formidable as ever. He said the absence of receiver Julian Edelman has only caused Brady to make minor adjustments.

“You see him spreading the ball out a little more — mostly out of necessity,” Rivera said. “But he still has an array of weapons. He just doesn’t have that one singular guy that he’s had in the past.”

Whether he has a go-to guy or not, as the Patriots (2-1) prepare for their toughest defensive test of the season, the offensive line’s ability to protect Brady will be in the spotlight.

Brady was sacked 15 times during his abbreviated 12-game regular season in 2016. That number is already up to 10 this season.

But Brady maintains his recovery time is also better because he has learned how to absorb punishment during his career.

“You do have to learn how to find the way down in a way that you’ll be able to get up and try to play the next play,” Brady said. “There’s some luck involved, but let’s go again, baby. Let’s line them up and play.”

The Panthers have done a good job getting after the quarterback this season, posting eight total sacks. At 37, linebacker Julius Peppers leads the team with 2 1/2 sacks.

But linebacker Luke Kuechly, who has a team-best 25 tackles, said they can’t ignore the versatility of New England’ run game. Mike Gillislee is tied for the NFL lead with four rushing scores, and James White has 12 catches for 126 yards.

Here are some things to watch in Sunday’s game:

MILESTONE WATCH: With 185 career regular-season victories as a starting quarterback, Brady is one win from tying Brett Favre and Peyton Manning (186) for the most in NFL history.

CAPTAIN, MY CAPTAIN: Panthers veteran nickel back Captain Munnerlyn was shocked and upset that he only played 11 snaps against Drew Brees and the Saints in Carolina’s 34-13 loss on Sunday. This week, he let coaches know about it.

“I didn’t come here for that,” said Munnerlyn, who signed a four-year, $17.5 million deal to return to the Panthers. “And I told them. I expressed my feelings. I want to play.”

Rivera said the team will look at ways to get Munnerlyn back on the field against the Patriots and Brady. With starting cornerback Daryl Worley battling a shoulder injury, that could mean Munnerlyn has to play some on the outside.

McCaffrey was really the one weapon Cam Newton had in the passing game, hauling in nine catches for 101 yards.

The Panthers have struggled all season with picking up big chunk plays and were held to just 13 points by the Saints, who had the NFL’s 32nd ranked defense coming into last week’s game. This week, New England is No. 32, but Newton has struggled against all competition this season with twice as many interceptions (four) as TD passes (two).

PERFECT GANO: Panthers kicker Graham Gano was locked in a kicking battle with Harrison Butker in the preseason, but emerged as the starter and has responded by making all eight field goal attempts this season. Carolina had signed Butker to the practice squad, but the Kansas City Chiefs claimed him off waivers earlier this week.