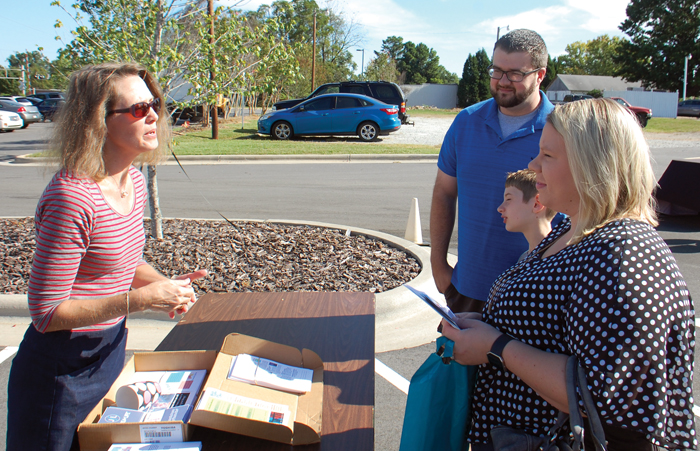 Mark Wineka/Salisbury Post Jtan Whisenant, left, talks about some of the programs First Baptist Church in Salisbury has to offer with Melanie Griffin, a first-year kindergarten teacher at Millbridge Elementary School. With Melanie are Josh and Matthew Griffin.

The first-ever block party invited more than 300 new RSS employees — those hired since the spring. District recruiter Jeanie McDowell said the school system’s “Welcome to the Family” invitation included all positions — from custodians and bus drivers, to substitute teachers and child nutrition staff, to full-time teachers and principals.

Inman is a veteran teacher with 11 years under her belt. She came to Isenberg Elementary this year from the Charlotte-Mecklenburg system, “and the experience has been wonderful,” Inman said.

The block party allowed the new employees to visit tables where representatives of various schools, credit unions and other services were ready with information.

Michael Chapman of Western and Southern Life served as disc jockey for the two-hour event. There were prize drawings, gift bags, popcorn, hamburgers and hot dogs. Employees were encouraged to bring their families, and several activity areas were set up for kids and adults.

“We had the best hiring year we ever had,” Moody said, adding the system opened the school year with more schools that had complete staffs than ever before.

“I just wanted to connect with other teachers,” she said at the block party. Her first month at Millbridge has been “a little wild, but it’s great,” Griffin said.

Melody Yates is a new exceptional children’s teaching assistant at Overton Elementary. “I love it,” she said. ” All the kids are great.”

Yates moved to Salisbury from Boone.

“I fell in love with the area,” she said.

A new second-grade teacher at North Rowan Elementary, Wanda Matthews attended the block party with her daughter, Whitley Bates, and Whitley’s son, Jourdyn. Wanda had a previous 22-year career at Food Lion, and she had been a substitute teacher before taking a full-time position this year.

“I have a love for children,” she said.

Wanda Johnson works as a one-on-one companion for a first-grader, who is blind, at Landis Elementary School.

“It’s going good,” Johnson said. “He’s very smart. I keep him safe, and I learn more from him than he does from me.”

Johnson previously had been self-employed. She attended Landis Elementary School herself as a kid and was in the second grade when it first opened.

“A lot of it looks exactly the same,” she said, “and a lot of it is different.”

Johnson attended the block party with Bob and Lori Tatarka. Lori is working her first year as an assistant in the Raider Learning Center (in-school suspension) at South Rowan High.

She loves the job, Lori said, because it gives her the opportunity to work with kids who might be struggling in some areas and help “get them through some rough spots.”

Lori was a substitute teacher last year, and she has been part of the South Rowan High Booster Club as an officer for seven years. She remains heavily invested in the school, though her son graduated two years ago.

“They just can’t shake me, or I can’t shake them — I don’t know what it is,” Lori said. “I just love being there. That’s basically my home.”

Tatarka said it was nice the school system put on the block party and provided information, food and prizes for the new employees.

“And it shows they appreciate you,” she said.